Why Did 'The Media' Investigate Trump's Veteran's Donations Instead Of Complimenting Him? UNFAIR! 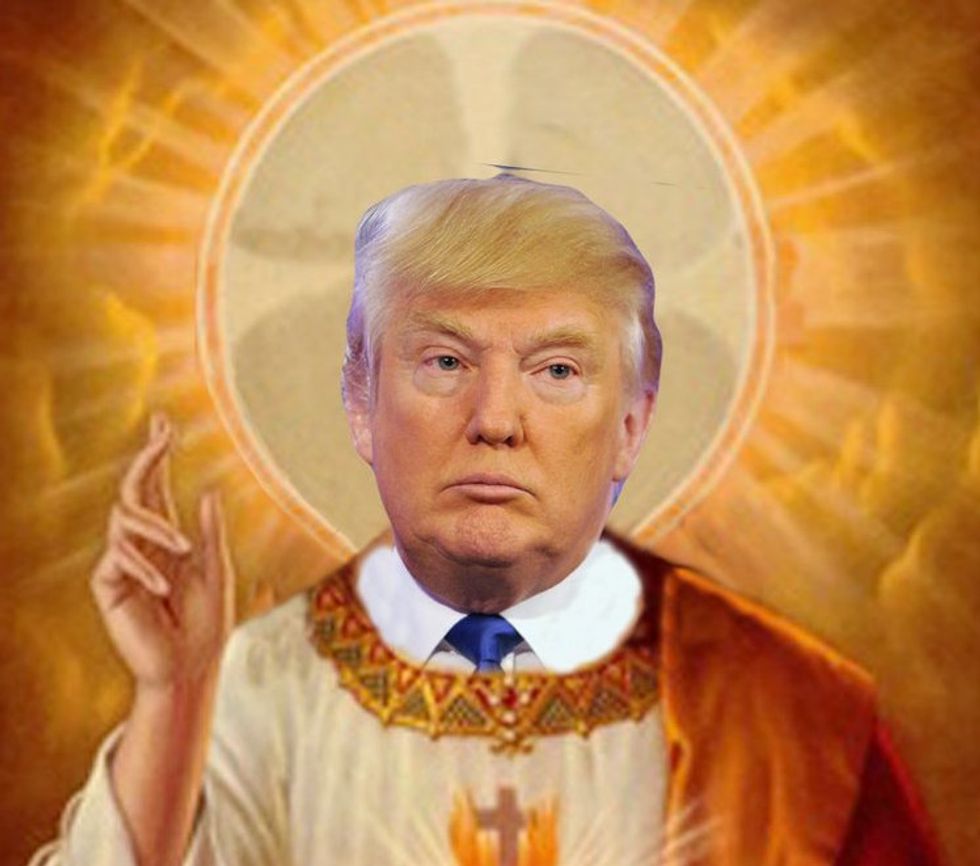 You see, about four months ago, Trump refused to participate in a Fox News debate because "they had not been very nice" to him during the debates, as they did not even bother asking him questions like "It seems like you are super awesome, Donald Trump! Would you like to tell us more about how great you are?" and did not once tell him he looked pretty. In lieu of participating in the debate, he held a big ol' televised benefit for veterans, during which he announced that the donations broke six million dollars, and also that he himself had donated $1 million to a veteran's charity.

Then, on May 24th, the Washington Post published Dave Fahrenthold's investigation into those donations, finding that they had only raised 5.6 million, and also that Trump had yet to donate any money himself. Of course, a $1 million check was then written that day to Marine Corps-Law Enforcement Foundation. Clearly, the Post knew in advance (possibly through SORCERY) that this was the exact day Donald Trump planned to make that donation, and that's why it published the story then. OBVIOUSLY. Trump then explained that he had needed that time to really vet the charities, which some people have found odd given that his Donald J. Trump Foundation had previously donated to them.

Naturally, Trump was very upset about this! You see, he believed that because he was "under no obligation" to raise or donate that money, that he should be allowed to brag about it without anyone checking up to see where that money went or if it was even donated. Because, obviously, it would have been better for all involved if Trump just got to talk about how nice and great it was of him to donate all that money, but also didn't actually have to donate that money.

Ah, yes, because that is how the press works. Because it is bad to look into anything Donald Trump says, instead of taking him at his word and saying he is a very nice person. Interestingly, this law only really applies to Donald Trump, and not anyone else ever. For instance, he once asked "hackers" to please hack President Obama's college records to find his place of birth.

Of course, literally all of Trump's theories on President Obama were proven to be ridiculous.

So, in case you are not clear on all of this, Donald Trump is allowed to say whatever vicious things he wants about people, and attempt to "investigate" his little conspiracies. However, in the spirit of FAIRNESS, all journalists must only publish articles about how he is a swell dude, and never actually look into anything he says, or question it in any way. Because whether they like it or not, it is their job to be nice to him. Also, if the president is Barack Obama, he is legally required to divulge his "long form" birth certificate and college transcripts, but Donald Trump does not have to release his tax information. Donald Trump is allowed to spread bizarre conspiracies on the regular, and no one is allowed to question him. Why? Because he believes in FREEDOM, and that is how FREEDOM works.

If we were living in a "fair" and "nice" country, of course, every article written about Donald Trump would be titled "Trump Does Good Job At Thing! Yay Trump!" or "You Know Who Is A Very Nice Person? Donald Trump!" or "That's A Real Good Thing You Did, Donald Trump" and everything he said would be taken as absolute truth, until five minutes later when he changed his mind and came up with a new absolute truth, at which point we would all be required to totally forget the first thing he said and agree that if it was wrong, then he was tricked into saying this. And if anyone messed this up, they would immediately be sent to the cornfield.

WAKE UP SHEEPLE! You do not want to be living in some kind of 1984 hellscape in which journalists are allowed to just investigate anything Donald Trump says! That is not how we Make America Great Again!

We Make America Great Again by complimenting Trump all of the time and never, ever questioning him for any reason. DUH.