Donald Trump Names Mike Pence As His One True Veep, Newt Gingrich Sulking On The Moon 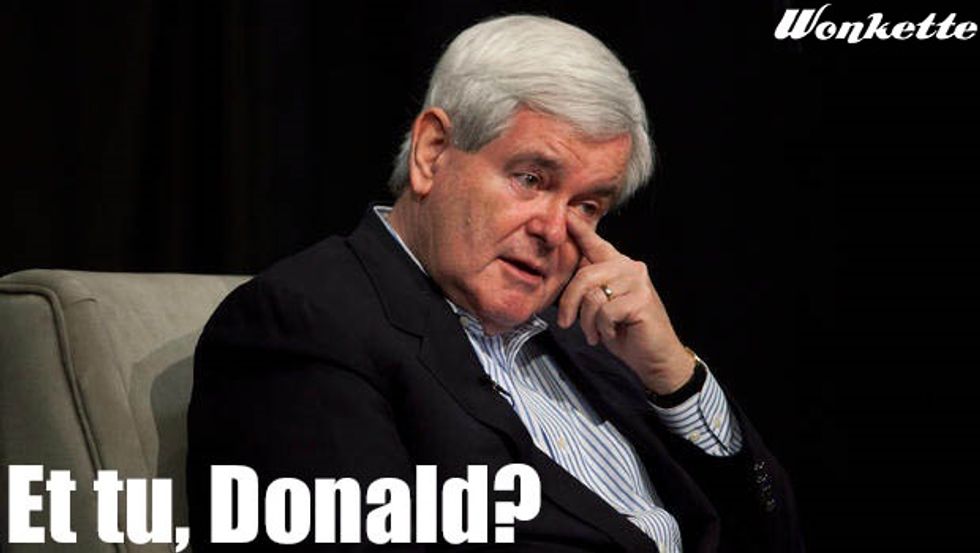 In a surprise announcement that was only surprising because it was delayed a couple hours instead of longer, Donald Trump has named Indiana Governor Mike Pence as his running mate, mostly because Pence was already in New York and needed to return some dry cleaning in Indianapolis by noon local time. Dude really needs to be back home again in Indiana to withdraw his name from the ballot, since Indiana law prohibits him from being listed for both governor and any other office.

Trump used the Official Trump Communication Network, known to some as "Twitter," to confirm the pick:

Runners-up Chris Christie and Newt Gingrich have not yet issued statements proclaiming Trump the wisest decider ever, and offering to turn tricks for a cabinet position, but are expected to do so soon, once they finish drying their tears and eating all the snacks. Newt Gingrich was also very busy explaining his comments on Loyalty Oaths for Muslims were taken totally out of context, so there's that, too. It's entirely possible that neither Christie nor Gingrich have actually been told yet, although we are unable to confirm the rumor we just made up that both are being held in an isolation chamber deep beneath Trump Tower.

We got all your sexxxy dirt on Mike Pence RIGHT HERE.

The nation's political satirists observed a brief moment of silence for the loss of months of jokes about Gingrich, but comforted themselves with the certain knowledge that Mike Pence is a despicable rightwing snot otter all in his own right. We'll have to assume that Trump's choice of Pence just might undermine his claim, immediately after Orlando, to be the bestest pal The Gays could ever hope for. Also worth noting: Everyone on the planet has been retweeting and screencapping this Mike Pence tweet from December 2015, which we'll assume will be the basis of the first or second question at the vice presidential debate:

Poor Mike Pence isn't even trending on Twitter as of Yr Wonkette's posting time. Sad! ("Newt" would have trended, you know.)