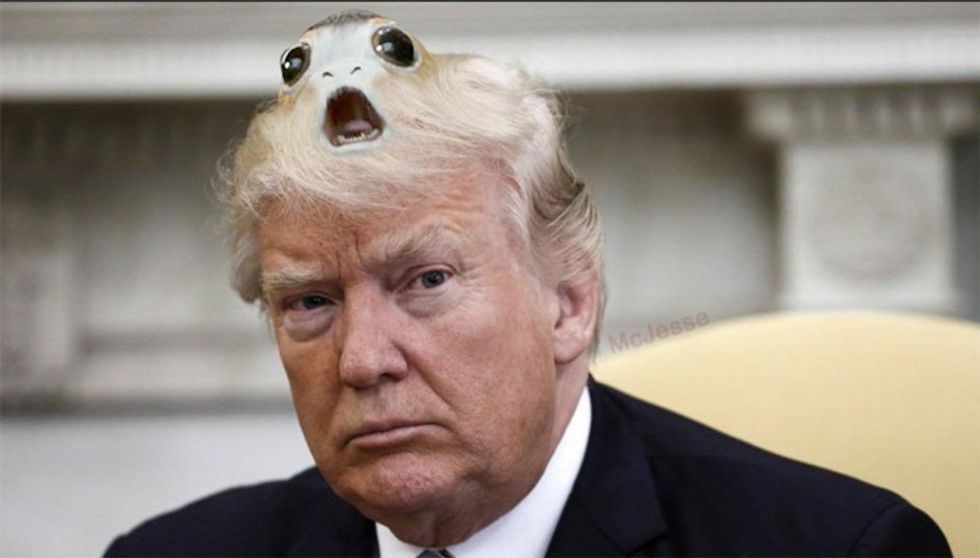 Donald Trump once again raised a few eyebrows yesterday when he proclaimed April 2 "World Autism Awareness Day." In a White House announcement that shows not even the slightest hint that Donald Trump was anywhere within an astronomical unit of those writing it, "Trump" praised the "exceptional contributions" made by people with Autism Spectrum Disorder and committed his administration to supporting "access to effective care, critical resources, and support services," for folks with autism (as long as government doesn't have to pay for it).

As Media Matters senior fellow Matthew Gertz points out, there's more than just a little bit of irony in Donald Trump's White House issuing a declaration of support for World Autism Awareness Day, given Trump's long dedication to the conspiracy theory that vaccines cause autism. You will not find Donald Trump apologizing, disavowing, or retracting a single one of his many, many, MANY tweets in support of that myth:

Hey, do we really need a link to a good debunking of the myth that spreading out vaccines is safer? Here's that link, and a reminder of the best reason not to spread out the vaccine schedule: taking longer to vaccinate leaves those precious babies vulnerable to disease for a longer period of time, and increases the chances that parents may miss some of those vaccines.

Has Donald Trump become any more educated on the real science, or the multiple studies that have shown no link at all between vaccines -- or the vaccine schedule -- and autism? Why would he? He's sure of the things he knows, whether they're true or not, and so in 2016 -- yes, during the friggin' campaign -- Trump met with Andrew Wakefield, the discredited former physician who did the fake study that started the whole vaccine/autism panic in the first place.

And earlier in the campaign, during a primary debate, Trump proclaimed -- albeit without the formality of a presidential proclamation:

Autism has become an epidemic. Twenty-five years ago, 35 years ago, you look at the statistics, not even close. It has gotten totally out of control. I am totally in favor of vaccines, but I want smaller doses over a longer period of time. Because you take a baby, and I've seen it. I had my children taken care of over a long period of time, over two or three years. Same exact amount. But you take this little beautiful baby, and you pump, I mean it looks just like, it's made for a horse, not for a child. And we've had so many instances. People that work for me. Just the other day — two years old, two and a half years old, the child, a beautiful child, went to have the vaccine, and came back, and a week later got a tremendous fever, got very, very sick, now is autistic.

And now Donald Trump is helping us all think about World Autism Awareness Day. Nothing at all weird about that, nope, nope, nope.