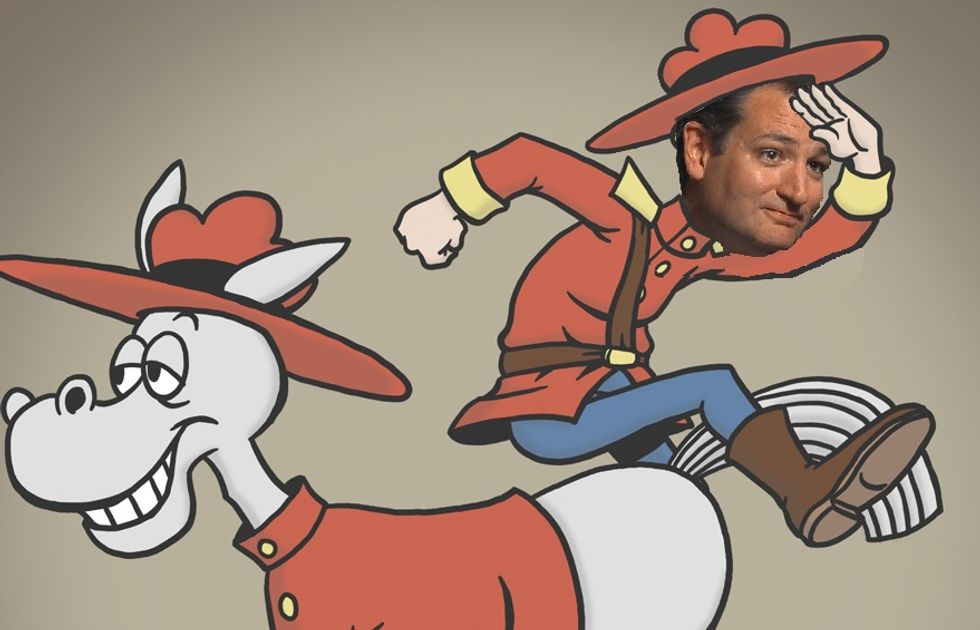 You might think that after all the foofaraw and fuck-tussling over the birth certificate of Barack Hussein Obama, there's no way in hell that the birther crowd would ever support a candidate who was indisputably born in a totally different country that is not the U.S.A., right?

Don't be silly. Birthers are coming forward to say they just can't get enough of Ted Cruz, who was born in Calgary, Alberta, Canada  [Doktor Zoom sucks at geography. This would worry him if "Canada" were a real country] -- even though there are like three different countries named right there. But birthers are saying, nahh, man, it's OK, because even though his father was a Cuban citizen, his mom was an American citizen, so it's cool, he's totes American. It's a totally different case from that of the Kenyan Usurper, whose father was Kenyan and whose mother was an American citizen, because Ted Cruz never lived in Indonesia or ate a dog or something argle bargle beagle.

For starters, there's good old Donald Trump, P.I., whose Obama birf certificate investigative team may never have come home from Hawaii. On ABC's "This Week," Sunday, Trump said he wasn't sure where Cruz was born, but wasn't too worried about it, either, because really, that's Ted Cruz's business.

Trump was asked by Jonathan Karl whether Cruz's birth in Canada makes him eligible to be president of the United States.

"Well, if he was born in Canada, perhaps not," Trump said. "I'm not sure where he was born."

"Ok, well then you'll have to ask him that question, but perhaps not," Trump shot back.

Maybe he can be president, maybe not, but Trump isn't about to pry.

And then there's Lord (maybe) Christopher Monckton, the climate change denier and all around loony who once insisted "I'm no birther" and then explained that Barack Obama's birth certificate was an obvious forgery. He's got an article on WND saying that we'd better hurry up and "carve a noble statue of" Ted Cruz to commemorate his courageous call for abolishing the IRS and instituting a flat tax. It seems like a pretty low bar for getting a statue, but if we can have Rush Limbaugh Memorial Boulevards while Rush is still alive, why not a statue to Ted Cruz? Lord Monckton isn't bothered by -- and in fact, doesn't even mention -- Cruz's Albertanian and Canadian birthplaces, but he's pretty sure we should get going on that statue; there's not even any need to "wait until after he has served two spectacular terms as President of the United States."

In conclusion, we can only ask: Why hasn't the liberal media told us anything about this mystery man Barack Obama?