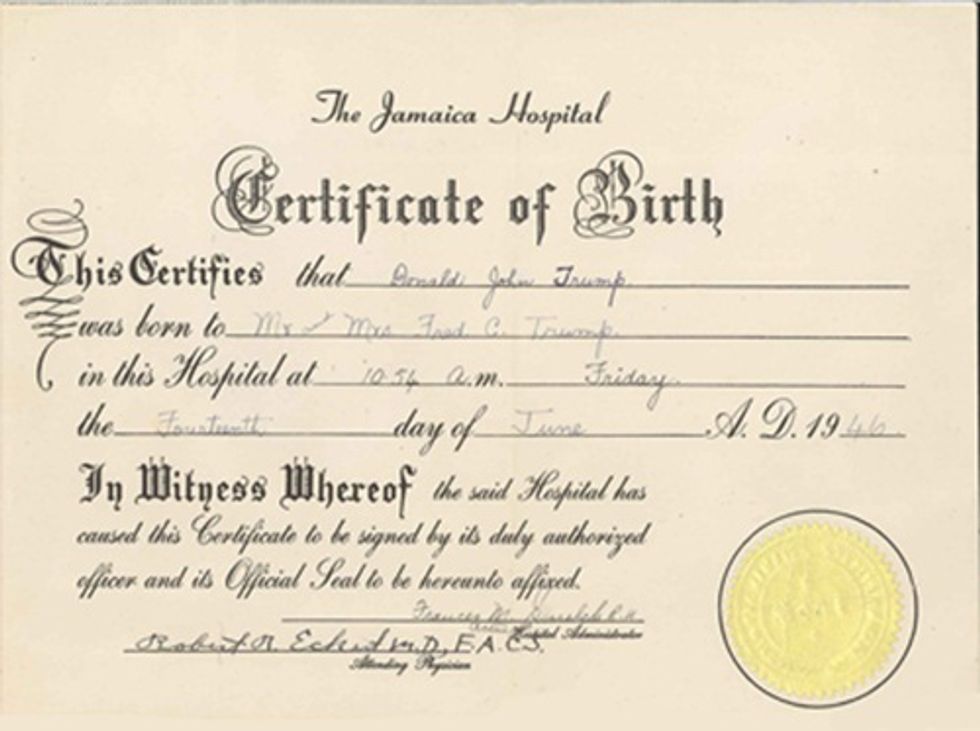 Because cartoon rich person Donald Trump constantly needs new attention for his fake presidential run, he's recently decided he's a birther. Sure thing, Donald Trump. How brave of you to take time off from your important job fake-firing and fake-hiring former celebrities to shed light on this pivotal fake issue. But once the "Trump is birther" news cycle ended, he needed to up the ante. So he releasedhis birth certificate to Newsmax yesterday. Except this yellow alleged hospital document is not an actual birth certificate from the New York City Department of Health. So why does Trump refuse to release a real, certified, long-form birth certificate? What is he hiding? Where was he really born?

As you can see, this document bears the signature of an alleged physician, but it has no official state or city seal and does not even purport to be issued by an official agency. It's a piece of paper that would be easy to fake on any 1990s banner/certificate-maker software, something your editor has a great deal of experience with, as he used to print out and award certificates to various individuals, from friends at school, to old people at church, to his stuffed animals, to himself. Your editor's late family dog can present a certificate of similar authority as this "birth certificate" certifying that she once caught and killed a squirrel.

It appears instead to be a hospital "certificate of birth," meaning the piece of paper the hospital gave to his family saying he was born. Such a document typically has the signature of the hospital administrator and the attending physician.

Trump's mother, it should be noted, was born in Scotland, which is not part of the United States. His plane is registered in the Bahamas, also a foreign country. This fact pattern -- along with the wave of new questions surrounding what he claims is a birth certificate -- raises serious doubts about his eligibility to serve as President of the United States.

Trump can obviously clear this up if he provides everything Barack Obama's provided to the press, and everything he's demanded from Obama. This would be:

- Two (or more) contemporary newspaper announcements confirming that Donald Trump was born in the United States. (Two of these exist for Barack Obama.)

- A certification of live birth produced by the state Trump was born, verified by hand by reporters. (FactCheck.org verified Obama's certification in 2008.)

- A picture of the young Donald Trump and or/interviews with people who knew him.

And yet Trump is totally silent. And he continues to hide his financial information from the public. And, even more importantly, Trump has yet to provide any official documentation for that hair on his head, which may be living and working in the United States illegally. This is a grave matter. The man is probably ineligible for the presidency, from what we've seen.

Who's the Kenyan now? [Ben Smith/Weigel]