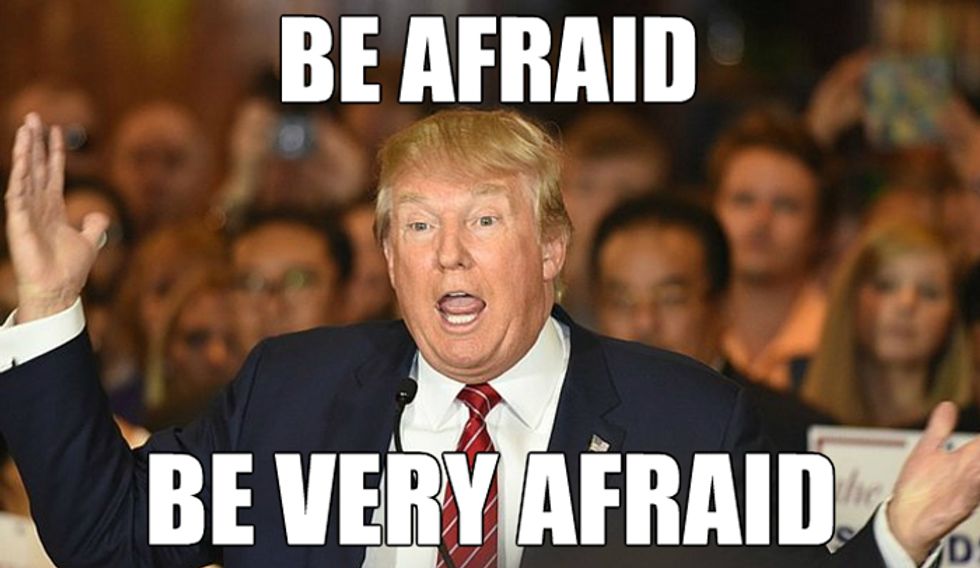 As is his wont, Donald Trump kicked off his announcement that the U.S. would be pulling out of the Paris climate agreement with a lot of unrelated stuff, like a review of how great his first 100 days were (he got a Supreme Court justice confirmed. He did!) and a rather unfortunate bit of fantasy where he claimed, "Our tax bill is moving along in Congress and I believe it's doing very well," when in fact there is no bill at all, not in either house of Congress, or even a White House proposal that's detailed enough to base legislation on. Even the first words out of Trump's mouth were a fiction: he was very sad about a terrorist attack that hadn't happened. (OK, fine; his very first words were "Thank you very much. Thank you." But he was probably lying about that, too.) Here's Donald Trump updating the world on fake news:

I would like to begin by addressing the terrorist attack in Manila. We’re closely monitoring the situation, and I will continue to give updates if anything happens during this period of time. But it is really very sad as to what’s going on throughout the world with terror. Our thoughts and our prayers are with all of those affected.

Stirring, isn't it? Barack Obama never matched the heights of eloquence of "it is really very sad as to what’s going on throughout the world with terror," did he? But as we mentioned, it appears there was no terrorist attack in Manila. There was an attempted robbery at a casino and resort, though, and it was horrible: a single gunman shot up the place and set several gaming tables on fire, and in the resulting panic, 37 people died, mostly from smoke inhalation, but some may have been trampled.

The victims, who did not appear to have been shot, are thought to have died of suffocation, Southern Police District Director Superintendent Tomas Apolinario said Friday. "Most of the victims were women who were found dead inside the bathroom," he added.

NBC reports that for hours after the attack -- that is, at the time President Trump was calling it terrorisme -- officials had insisted that only the gunman had died; he was wounded by casino security, then killed himself. CNN noted that thick smoke from the fires had delayed a search of the building, which was when the victims' bodies were found.

Shortly after the speech, NBC News Tweeted that a U.S. intelligence official had said the president "was freelancing" when he called the Manila attack terrorism, and that "a laugh went up in the Situation Room" when he said it. Trump didn't say why he thought it was terrorism, although CNN reported that national security adviser H.R. McMaster had briefed Trump on the incident shortly before the speech and that the president was told "that media reports indicated ISIS had taken credit" -- which does not appear to be the case at the time.

Philippines National Police chief Ronald dela Rosa said there was no indication that the attack was related to terrorism, saying the gunman "would have shot at people or triggered a bomb" if he'd been a terrorist. Dela Rosa warned that ISIS, which has been active in the Philippines, might claim it had carried out the attack for propaganda purposes. The gunman reportedly stole casino chips "worth about 130 million pesos, or roughly $2.6 million," though god only knows where he expected to exchange them for cash.

New York Times terrorism reporter Rukmini Callimachi Tweets this morning that the Islamic State has claimed responsibility for the attack (with some information that appears flat-out wrong, like claiming double the reported number of casualties), but here's the thing: There's nothing to suggest that claim was available to Trump yesterday -- the mention of "media reports" as of the time of his speech seems wildly inaccurate. It's possible he or some aides saw social media reports, however, because as Adam Weinstein notes, rightwing Twitter was FULL of baseless claims the casino had been attacked by terrorists; he found at least six breathless Wingnut Twitter stories about the "ISIS attack" that circulated before the Philippines police said no, it's not terrorism.

Whatever Happened In Sweden, Donald Trump Pretty Sure They Had It Coming

Do we know with 100% certainty this wasn't terrorism? No, but the problem is that unless Trump had super-great intel that contradicted everything Philippines authorities were saying, he didn't have any solid reason to call it terrorism either, which fits his usual pattern of yelling "terrorism" before the facts are available. Or without any facts at all, like that time when he talked about some non-existent terrible event in Sweden, which he later said he was absolutely right about because several days later, there were riots in Stockholm. He's just psychic that way. Trump also said last year's crash of an EgyptAir jet "looked like" terrorism, although French investigators believe it was an accident. When in doubt, Trump yells "terrorism" and hopes he's right. The survivors of the Bowling Green massacre know all about it.

Ultimately, Trump's seemingly baseless claim the attack was terrorism is probably no big deal, since the rest of his climate speech was a mishmash of half-truths, misleading statements, and outright lies.

Yr Wonkette is supported by reader contributions. Please click the "Donate" linky to send us money. No casino chips please.