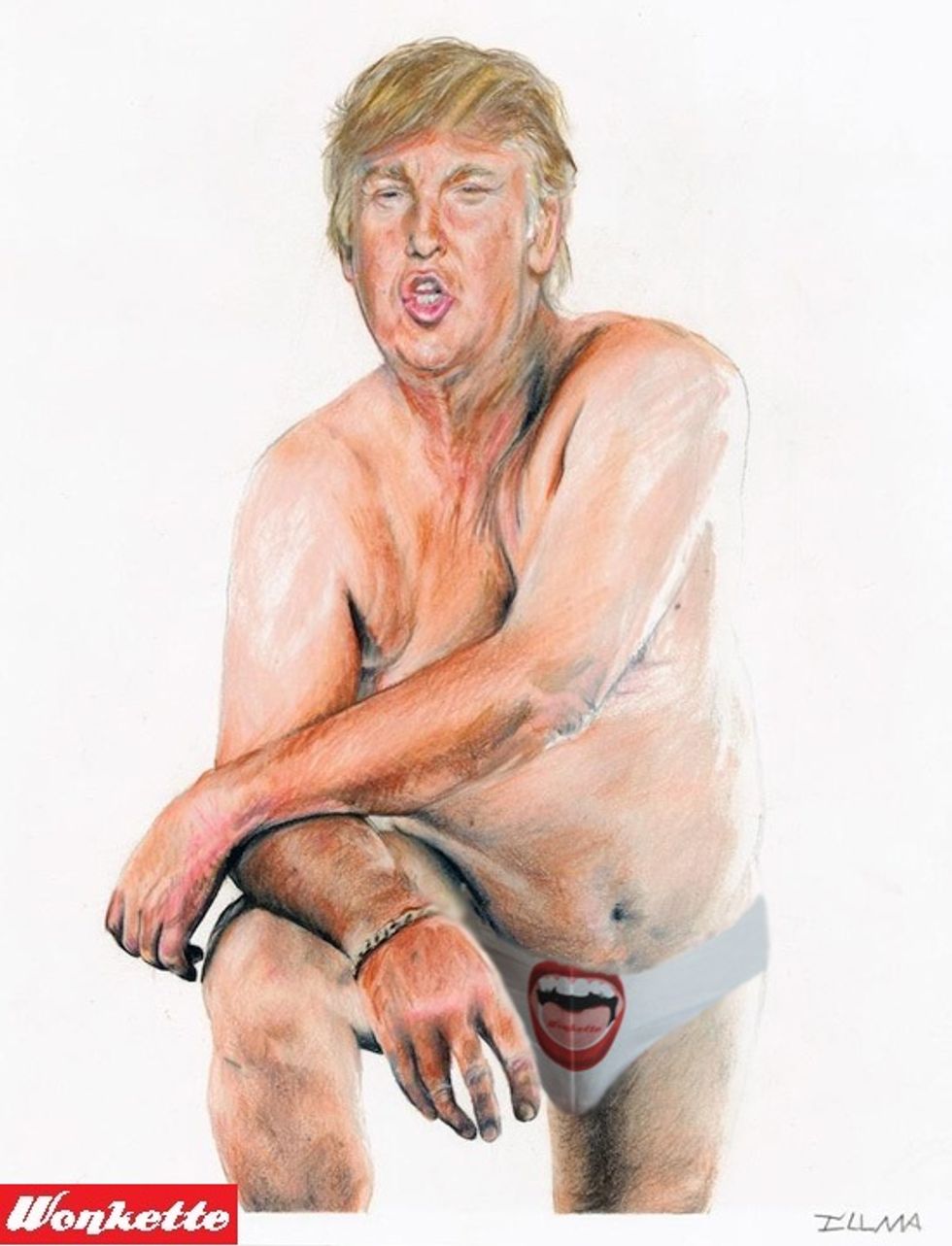 If you've haunted the Interwebs regularly, you've probably already seen Los Angeles artist Illma Gore's now-infamous painting of a nude Donald Trump as a would-be emperor (and a less than impressively endowed one, at that) with no clothes on at all. The image went viral not long after Gore posted her portrait of the short-dingered vulgarian to Twitter in February. You may have already been traumatized by happening upon the painting in a comments section near you, but for the purposes of not getting in Dutch with the Google Gods, we've bowdlerized the image by putting Donald in a tasteful pair of Wonkette vagina dentata panties, available, sans Trump, here. Ms. Gore's artist's statement for the painting is short and to the point: “Because no matter what is in your pants, you can still be a big prick."

Prepare to be astonished: The artist has been threatened with a lawsuit from Trump's legal team.

The artwork, titled "Make America Great Again," is on display in the Maddox Gallery in Mayfair, London, and has attracted bids of over £100,000 ($141,770 in real money). Trump's people, who apparently only approve of depictions which stroke the boss's ego and other things, don't seem to consider it a masturpiece, however.

Gore said Trump’s legal team has tried stripping away her artistic freedom. She said his lawyers have called her twice threatening lawsuits over the hateful huckster’s right of publicity.

She said Facebook, too, has warned of legal action under for copyright violation under the Digital Millennium Copyright Act. Gore also accused the site, as well as eBay and Twitter, of censoring some posts of the painting.

Yr Wonkette is not a lawyer, but we'd say it's fairly obvious that, as a public figure, Trump has little chance -- not even the smallest nubbin -- for legal action, at least in the U.S., since the First Amendment supports the right to parody, especially of a public figure. "Right of publicity"? No idea -- we know that celebrities and their estates have control over how their images are used in ads, but it's not like Gore's using the image to sell Vienna sausages or jujubes. British libel law is notoriously more plaintiff-friendly than American law, but we have no earthly idea how it applies to satirical images, as opposed to journalism. That's the rub, isn't it?

Ms. Gore said that besides the legal warnings, she's also been treated to “threats of rape” and “detailed death threats” as well as stalkers visiting her home. All part of the political process after all. And yes, your Wonkette betting pool offers even odds that some Trump wanker will pop up (so to speak) in the comments to make a witty comment about how liberals are just fine with death threats against artists who depict Mohammed (which we aren't, anyway).

Even so, Illma Gore vows to bravely soldier on in the trenches of satire, telling the New York Daily News she'll unveil a new painting, also inspired by the presidential campaign, sometime next week, although she offered no hints as to its subject, saying only “I'd ruin it if I told you now!”

It better not be a picture of Sen. Ted Cruz (R-Canadia) as Dudley Do-Right. We already did that one.