Donald Trump Saves Eight Congressional Ethics Jobs From Going To Mexico! (OR DOES HE?) 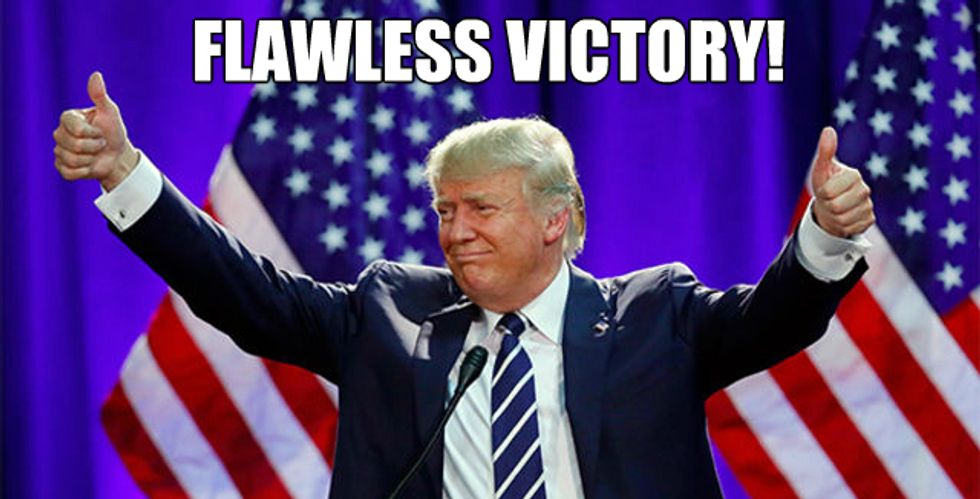 Well then, that was fast! The House GOP got together for a super secret Netflix and Chill session Monday night and voted to gut the Office of Congressional Ethics (OCE), the only independent watchdog for congressional ethics, and instead just place it under the purview of the House Ethics Committee. (Like we said, fox guarding henhouse, Trump guarding pussy, etc.) (Also, fun fact, the new "ethics" "committee" or whatever would not have been allowed to ever address the public, or pay anyone to address the public, or make any of its investigations public.) But whoa hey, all of a sudden everything old is new again, and congressional Republicans have decided that JUST KIDDIN', they guess they will leave things they way they were, since literally everyone in the entire world condemned them and called them craven fucksticks for what they did.

For real, House GOP leadership was against the change, Democrats went bonkers, Washington Post hack Chris Cillizza called the House GOP a bunch of big dumbs, and the newborn baby Jesus pooped in their general direction. (The change was an amendment introduced by Rep. Bob Goodlatte of Virginia, attached to a larger package the House is set to vote on Tuesday.)

Oh, and Donald Trump seemed to think it was kinda lame:

Oh for heaven's sake. Why was there a full FOUR MINUTES between those two tweets? Is typing with teeny fingers that slow? And where on earth, in heaven or in hell do ellipses have SEVEN PERIODS?

Sorry, we are getting distracted. But as Trump tweets go, those aren't that big league. As Think Progress's Igor Volsky notes, Trump didn't exactly say DON'T do it, and CNN notes that Iowa Congress-Idiot Steve King has "vowed to personally continue pressing for the ethics reforms." (He also said House Republicans are just like Jesus, fighting for their right to face their ethics accusers, like Jesus had to do before the high priest. Ayup.) So anyway, this shit is coming back, just somewhere down the line.

But that doesn't mean the media isn't falling all over itself crediting Trump for saving these jobs (eight, to be specific) from going to Mexico. CNN is patting him on the back, as are the Associated Press, and the Washington Post, and the New York Times, and BASICALLY EVERYBODY ELSE, as documented in this thread on Volsky's TwitterFace account.

Guys? SHUT THE EFF UP AND STOP ACTING LIKE YOU FELL OFF THE TURNIP TRUCK YESTERDAY ONTO DONALD TRUMP'S AMPLE BOSOM SHELF.

Or just listen to smart man David Axelrod and use your noodles as to what he might be implying here. It's not complicated:

Whether it was planned -- "Listen, Republicans, I have a YOOGE idea for how I can take credit for something without doing any work!" -- or not, Trump didn't do shit. If he had actually tweeted, "Hey, you stupid mutants, stop being useless and actually, you know, govern," we might give him credit. Might.

But this is just stupid, and the media is bad, and it should feel bad.