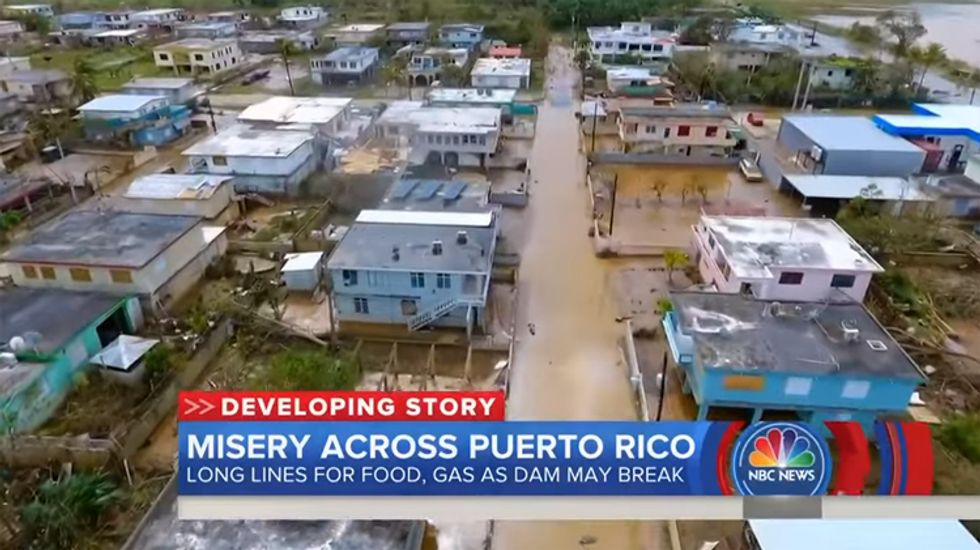 But are they standing for the anthem? Better check before helping.

While three and a half million American citizens in Puerto Rico spent the weekend with no electricity, little access to drinkable water, and fewer "houses" than you would want in such a situation (some areas have seen 90 percent of houses destroyed), Donald Trump was too busy dealing with a football emergency to notice. Monday night, somebody on his staff must have finally mentioned to Donald Trump that things in Puerto Rico were really bad after Hurricane Maria hit the island -- and that his continued silence on it was starting to draw pissy questions. Trump took the message to heart, and cranked up his Twitter to spread the message: Puerto Rico is a very bad place that clearly had no business getting hit by a hurricane. What were those people even thinking, getting hit by a hurricane like that?

Then Trump got back to what really matters: Yelling at John McCain, and then at the NFL some more.

Damn, Puerto Rico, why couldn't you be more like Texas and Florida, and not be an embarrassment like that? Sort of makes a person wonder what it is about Puerto Rico that Trump sees differently than Florida and Texas, huh? But let's be fair -- he had a really difficult time acting like he cared about people in either of those disasters, too. But we don't recall him actively scolding them for getting hurricaned.

Also, he's not quite right about the food, water and medical "doing well," either: Puerto Rico's governor, Ricardo Rosselló, said on MSNBC Monday night that only 40 percent of the island's residents have access to potable water. Reuters reports that Puerto Rico's hospitals "are in critical condition":

After the power went out, back-up generators at some hospitals failed quickly. Other hospitals are running critically low on diesel. Fuel is so precious that deliveries are made by armed guards to prevent looting, according to Dr. Ivan Gonzalez Cancel, a cardiovascular surgeon and director of the heart transplant program at Centro Cardiovascular.

“Another hospital wants to transfer two critical patients here because they don’t have electricity,” Gonzalez Cancel said. “We can’t take them. We have the same problem.”

Another doctor warned, "If this is not taken care of, people are going to start dying." Generators are running out of fuel and many patients desperately need to be evacuated to hospitals on the mainland. So you know, doing well. Better do something about that debt!

Needless to say, the Internet Was Not Pleased:

But don't worry! Donald Trump is staying on top of things, and he's confident that at least one official in Puerto Rico said something nice about him. Or about the government, at least:

He followed that with a demand that the NFL "set a rule that you can't kneel during our National Anthem!"