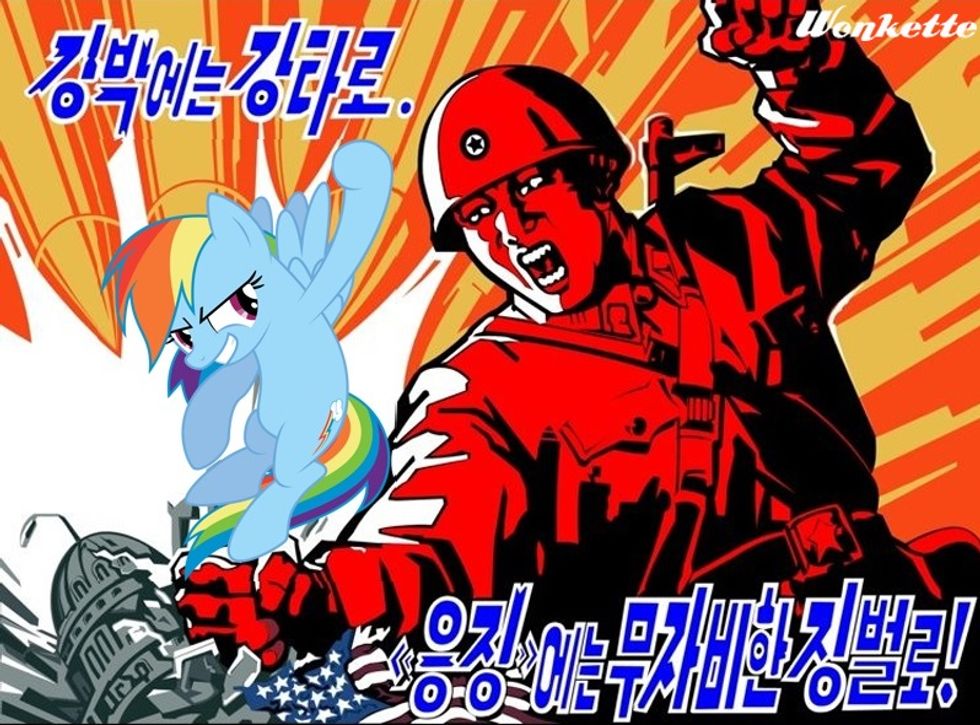 Rainbow Dash Will Not Let This Aggression Stand, Man

Donald Trump has a completely unfair reputation for being kind of a dummy who doesn't know stuff, which is completely inaccurate, because he actually has the innate curiosity and wilingness to take in new information you might expect from other kids his age -- about five. For one thing, who ever would have guessed that Donald Trump likes trucks until we saw him playing at driving one? Similarly, he recently learned that health care is complicated, and while he was arguably the last person in America to learn that, he learned it all the same. Seldom is the question asked, "Is our presidents learning?" Happily, Donald Trump really is! Most recently, we've found out that Donald Trump has taken some tutelage from Chinese President Xi Jinping, who taught him that North Korea is actually a very complex thing.

Trump Invites Chinese President Over To Pussgrab 'N' Chill, Puts Him Up At Radisson Down The Street

Oh my god, White House, GET IT THE FUCK TOGETHER.

You might be forgiven for thinking, even after last weekend's golf summit with President Xi at Mar-a-Lago, that perhaps Trump saw the crisis on the Korean Peninsula in simple-minded terms, at least if you were going by his Tweets on the matter Tuesday:

But as it turns out, North Korea isn't an easy problem that you can just make go away by ignoring it, like climate science. As Trump explained in a Wall Street Journal interview published Wednesday, North Korea isn't even easy for China!

We hear a lot of people study up on North Korea for years and years and still find the reclusive dictatorship mystifying, but Donald Trump understood in just ten minutes flat what a complex situation Sino-Korean relations are!

Mr. Trump said he told his Chinese counterpart he believed Beijing could easily take care of the North Korea threat. Mr. Xi then explained the history of China and Korea, Mr. Trump said.

“After listening for 10 minutes, I realized it’s not so easy,” Mr. Trump recounted. “I felt pretty strongly that they had a tremendous power over North Korea,” he said. “But it’s not what you would think.”

Who'd have thought it? Apart from anyone who's ever dealt with, read about, or watched a PBS documentary about North Korea, maybe. We're looking forward to the Tweet that tells us how surprised Trump was to learn the country is sometimes called "The Hermit Kingdom," and that North Koreans can't even access the Internet (so much for Trump's clever plan to win them over with a Twitter charm offensive).

Trump was so impressed with how much he learned from Xi Jinping that he dropped one of his most frequently repeated campaign promises and decided not to label China a currency manipulator after all, heading off a trade war and possibly persuading China to lean on North Korea a bit more, in a complex sort of way.

Oh, also, North Korea appears to be getting ready for another atomic weapons test, but we're fairly sure Trump knows what those are, since he's already lectured the press on what uranium is.

In any case, now that the president is aware how complex North Korea is, we anticipate his next step will be to offer Kim Jong Un tax credits to give up his nuclear weapons, as long as North Koreans over 50 can be charged five times as much for health insurance. Then the Freedom Caucus will scotch the deal.

In COMPLETELY UNRELATED news, we learn that today the Air Force dropped the most powerful non-nuclear bomb in its inventory on a cave and tunnel complex in Afghanistan that the White House says was being used by ISIS. The GBU-43 Massive Ordnance Air Blast (MOAB) weapon, a 21,600-pound weapon nicknamed the "Mother Of All Bombs" because it has the same acronym, was developed for use in Iraq but had never before been dropped in combat. The Los Angeles Times, with a cynicism that clearly indicates it's an enemy of the American People, notes,

It was not immediately clear why the Pentagon decided it was necessary to use an 11-ton bomb against a group that largely depends on suicide bombers and AK-47s to attack enemies.

Well, heck, you smarties, that should be pretty obvious: 1) because we can, and 2) because getting China to make Korea stop testing missiles and bombs isn't easy, but dropping a 21,600-pound bomb from an MC-130 aircraft ought to get their attention quite simply. Once they see us show off our Biggest Bomb of All, they ought to quiet down real quick.

We're guessing the part about how North Korea reacts to military threats was going to be in the eleventh minute of Xi Jinping's little history lesson for Mr. Trump.

Yr Wonkette is funded entirely by reader contributions, except for the small bit of extra revenue we bring in from tutoring the president on world history (Wish those checks would clear). It would sure be swell if you'd click the "Donate" linky below and throw some moneys at us!

Paywalled out of the WSJ article? Try going there from Twitter!