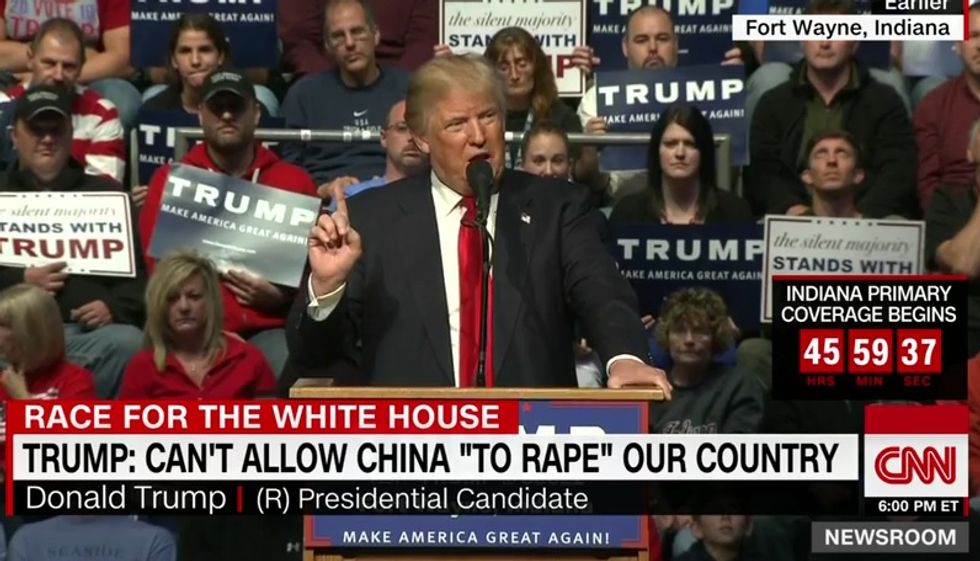 No sooner had we finished typing yesterday about Donald Trump's about-face on Chinese telecoms company ZTE, the other shoe dropped like a $500 million sack of Chinese cash.

BECAUSE IT WAS A $500 MILLION SACK OF CHINESE CASH!

President Xi of China, and I, are working together to give massive Chinese phone company, ZTE, a way to get back into business, fast. Too many jobs in China lost. Commerce Department has been instructed to get it done!

A mere 72 hours before Trump tweeted that he was instructing Wilbur Ross to reverse the Commerce Department's ban on American exports to ZTE, the Trump Organization got a big boost from Chinese state banks. The Trump Organization has been working on a hotel project in Indonesia since 2015, and Hosanna!, Sinosure and the Bank of China decided to pony up the $500 million in financing to get the project going!

The park – expected to be backed with up to US$500 million in Chinese government loans – is part of an “integrated lifestyle resort”, known as MNC Lido City.

The project includes Trump-branded hotels, residences and a golf course, as well as other hotel, shopping and residential developments.

Referring to its subsidiary, MCC [Metallurgical Corporation of China] described the theme park as “the first culture and tourism industry project by the Central Research Institute of Building and Construction” and was “in response to” China’s Belt and Road Initiative.

Let's unpack this one for a second. China's Belt and Road Initiative is a massive infrastructure program that aims to connect China to Europe, Africa and the rest of Asia. China's government will finance transportation and building projects as a way to increase China's soft power and bring all of Eurasia into its orbit. Here, have a little video.

Now you may or may not buy into the idea that China's increasing clout necessarily diminishes America's power in the world. But Donald Trump campaigned by shouting to crowds of pitchfork-wielding rubes that China was "eating our lunch" and "taking advantage of us."

Wake Up America -- China is eating our lunch.

China steals United States Navy research drone in international waters - rips it out of water and takes it to China in unprecedented act.

But if he can make a cool $10 or 30 million by helping to increase China's reach, well, WHO WOULDN'T, RIGHT?

And it's just a coincidence that three days after China agreed to finance Trump's Indonesia project, he issued a lifeline to ZTE, which was effectively put out of business by the Commerce Department's export ban on phone parts?

Yeah, sure it is.

This deal has all the hallmarks of a quid pro quo. All of them. https://t.co/4Zg2E0BuPP

“You do a good deal for him, he does a good deal for you. Quid pro quo,” said Richard Painter, the White House ethics lawyer for former President George W. Bush and now a Democratic candidate for Senate in Minnesota.

“This appears to be yet another violation of the emoluments clause of the Constitution,” Painter said, referring to the prohibition against the president receiving payments from foreign governments.

To which the White House replies,

Asked about Chinese government's involvement in a Trump Organization project in Indonesia and if that violates the emoluments clause, Raj Shah says, "I'll have to refer you to the Trump Organization... you're asking about a private organization's dealings." pic.twitter.com/3R2vjEHe32

Raj Shah: I'll have to refer you to the Trump Organization on that one.

I refer you to Uday and Qusay, noted experts on the Constitution's Foreign Emoluments Clause. Is that really what we're going with here?

You're asking about a private organization's dealings that may have to do with a foreign government. It's not something that I can speak to.

Meanwhile, Trump's staff are desperately trying to backpedal, insisting that Trump would never order the Commerce Department to kill a law enforcement action as a part of trade negotiations. Particularly when the Senate Intelligence Committee heard testimony today from the nominee to the National Counterintelligence and Security Center on the inherent insecurity of ZTE phones.

Plus, there's that whole thing about bribery being against federal law.

Just a reminder that the bribery law (18 U.S.C. § 201) is still one of the few ethics laws that applies to the president, and ordering a cabinet agency to take action is one of the few things that would still qualify as an “official act” after the Supreme Court gutted the law. https://t.co/UolmT0yeYw

Looks like they forgot to loop in the big guy, though.

ZTE, the large Chinese phone company, buys a big percentage of individual parts from U.S. companies. This is also reflective of the larger trade deal we are negotiating with China and my personal relationship with President Xi.

Yes, tell us more about how you're taking "official acts" because of your "personal relationship" with the guy who just authorized half a billion dollars in loans to your company's project. Keep tweeting, Poppy!