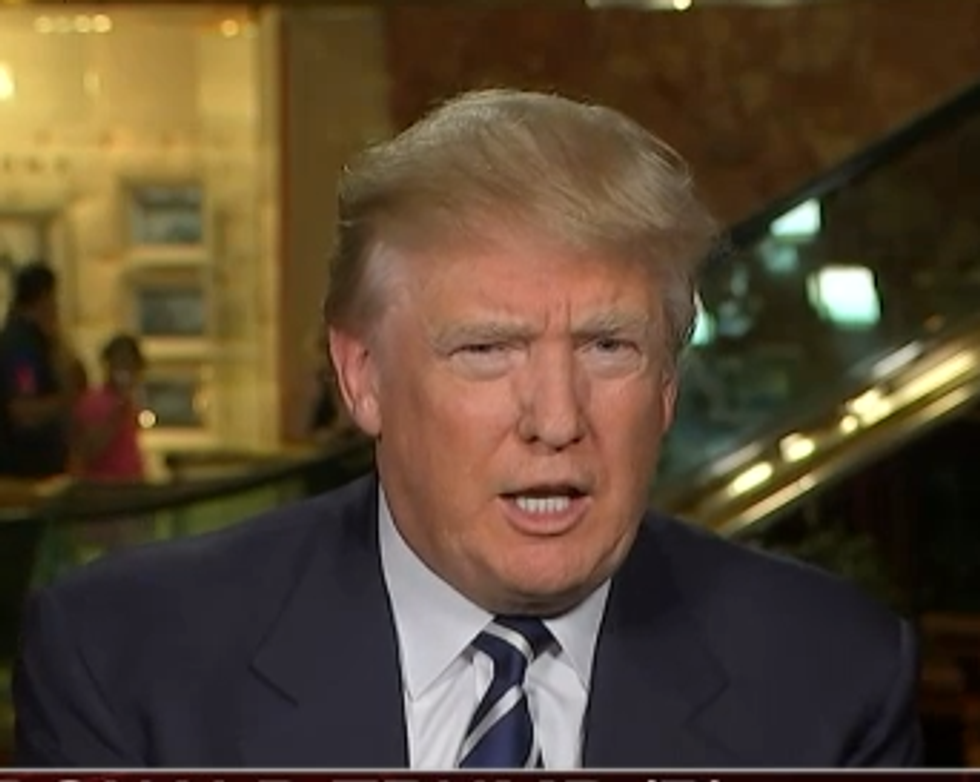 By now you know how smegma-encrusted weasel-trap Donald Trump said John McCain is one BIG pussy, and that he's only a war hero because he was captured, and that he prefers people who didn't get captured, and now everybody and their mother hates Donald Trump, except for all the Republican assholes who find this endearing somehow. Well, Trump would like to apologize. Excuse us, Trump would like to "apologize," for you being so stupid that you didn't understand what he said the first time. He explained this to known war correspondent Bill O'Reilly, who asked Trump to say something "man to man" to John McCain, like they would do if they were going to have a barfight, or maybe about to do Brokeback Mountain-style sex on each other:

“I have respect for Sen. McCain,” he said. “I used to like him a lot. I supported him. I raised a lot of money for his campaign against President Obama and certainly if there was a misunderstanding, I would totally take that back.”

You see? He used to love John McCain, and now he doesn't, but if you were too stupid and weak to understand what he was trying to say, then he takes it back, except he said it right anyway, so YOU SHUT UP. Trump also leans in to the fact that journalist Sharyl Attkisson analyzed his words and confirmed that he said "war hero" FOUR TIMES ALAN, and if Sharyl Attkisson says it, it must be true, because Sharyl Attkisson is the Arbiter of Trumps.

But really, O'Reilly KNOWS Trump, and he KNOWS nobody would ever say something so mean about St. John of McCain, who is a goddamned hero, so he wanted to give him a little push, so they could slob McCain's POW knob together:

O'REILLY: I know you for a long time [sic] and I want you to be honest. You DO think John McCain is a hero. I know you do.

TRUMP: I do and by the way I said it, I actually said it four times ...

Okay, guess that is settled.

They also spent time talking about how everybody wants to gay marry Trump, with BillO suggesting that it's because Trump acts like everybody in Washington is a "pinhead" and a "mouth-off," but, lest we forget, America also loves Trump, because, in his words, "I just released my financials and people were amazed at how good they are, they're great."