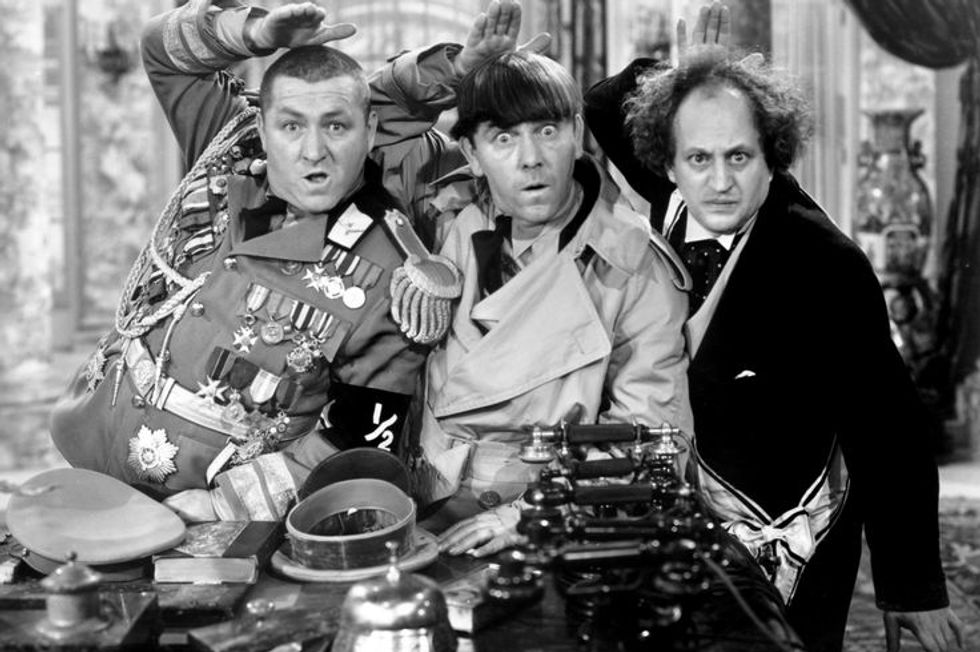 Any good Secretary of Defense should be able to go 'Woo-woo-woo-woop!'

Oh, guys, this is just adorable: Donald Trump's advisers are deciding what cabinet positions to give his best pals when the Great Man is "elected president of the United States." In the middle of a crisis, a rich fantasy life can be a useful coping skill, but there is such a thing as fucking your chickens before they're hatched, don't you think? NBC News has the skinny:

Sources close to the Trump campaign advise Yr Wonkette that Giuliani was initially eager to take the Attorney General job, but cooled on the idea when told he couldn't actually make up any laws he wanted. The prospect of Newt Gingrich as secretary of State has reportedly been met by American allies with a mixture of trepidation and disbelieving laughter. It's also entirely possible President Trump may appoint himself National Security Adviser, since he knows more about ISIS than the generals.

The NBC story notes Trump himself has avoided any premature transition planning, since he worries it might jinx the possibility of actually winning the election. Trump was reportedly "shocked" by stories that Mitt Romney was planning a cabinet well before election day in 2012. Trump's essential loathsomeness and unfitness for office has not, of course, played any role in his hesitancy to make plans for the day after tomorrow.

NBC also reports Alabama Sen. Jeff Sessions has taken a larger role in transition planning, since Chris Christie, the official transition chief, "has drifted from the campaign." That's a nice way of saying that since the convictions of two former lickspittles, he's been sitting shirtless in an empty office in Trump Tower, slathered in camouflage paint, reading T.S. Eliot and fondling a machete while muttering "The horror... the horror."

The Heritage Foundation has also generously offered its assistance in vetting names of potential cabinet members, as have former members of Romney's campaign staff and some members of the George W. Bush administration, but not the lame ones who made them losers. In what may indicate a desire by the Trumpers to devour the GOP in whole, RNC chair Reince Priebus has been floated as a possible chief of staff, since he has been Trump's most steadfast lapdog since Trump won the nomination. And since they're having such fun playing make a wish, the Trumpers are thinking the new RNC chair could be either "former" campaign operative Corey Lewandowski or deputy campaign manager David Bossie, who served loyally in the Clinton Wars. Longtime dirty trickster Roger Stone is reportedly checking White House blueprints to find a sufficiently dank sub-basement in which to lurk in his capacity as Secretary of Revenge. Ben Carson has been spotted near the exit of the Trump Tower parking garage holding a sign reading "I Can Has Serjin General?" in case Trump's limo passes by.

Best line in the whole piece:

Asked for comment on the above names floated for cabinet posts, Trump campaign spokesman Hope Hicks replied by e-mail that "none of this is accurate."

A Hope Hicks denial? That's as close to a confirmation as anything from the Trump campaign. Now if Trump surrogate A.J. Delgado answers Chris Hayes's questions about transition planning by pivoting to Hillary Clinton's criminal emails, we'll know NBC has it right.

Trump's presumptive press secretary, Alex Jones, had no comment on the rumors, citing the threat of Hillary Clinton death squads, but offered to sell us some trucker speed.

Follow Doktor Zoom on Twitter. He wishes to assure you he has already gone outside, turned around three times, and spat. AND cursed.