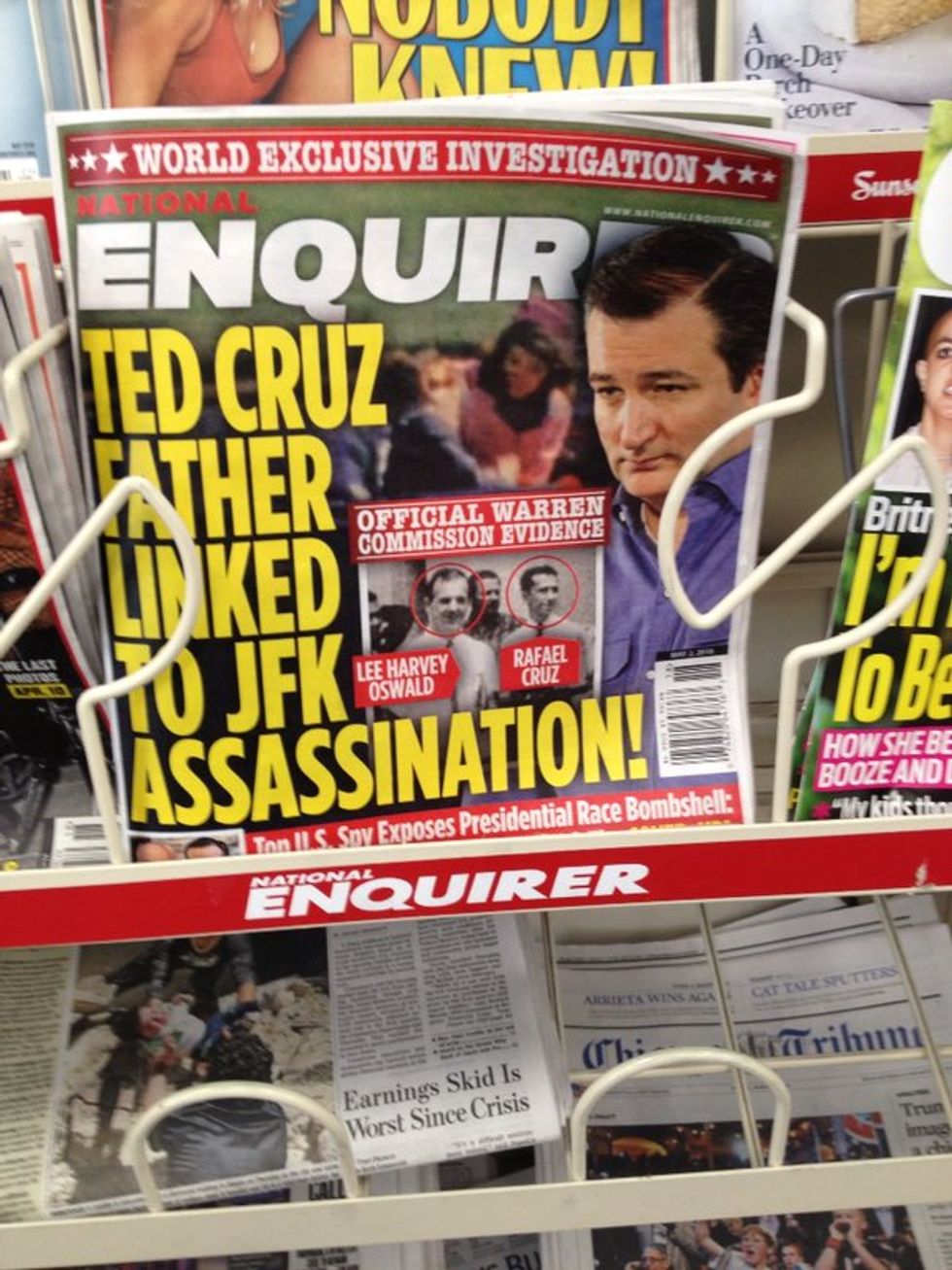 Did you hear about the breaking news about how on top of how Ted Cruz is maybe the Zodiac Killer, his dry-drunk dad might have been Lee Harvey Oswald's fluffer when he murdered our beloved President John Fitzgerald Kennedy? It's in The National Enquirer so it might be true! The evidence? Well, Oswald was in a picture taken in New Orleans a few months before the assassination with a guy who might or might not be Rafael Cruz! Were they planning MURDER together, while they passed out pro-Castro leaflets? Or did they just happen to stumble out of Lafitte's at the same time, because the real secret is how Ted Cruz's dad is gay for the penis?

WE WILDLY CONJECTURE, YOU DECIDE.

Anyway, Donald Trump decided it was time to just coyly suggest that maybe it's true and Big Rafael likes to murder JFK in his spare time. He said it to the "Fox & Friends" derp factory:

His father was with Lee Harvey Oswald, prior to Oswald's being shot, you know, the whole thing is ridiculous, what is this? Right prior to his being shot. And nobody even brings it up. I mean, they don't even talk about that. That was reported, and nobody talks about it, but I think it's horrible, I think it's absolutely horrible, that a man can go and do that, what he's saying there. [...]

What was he doing with Lee Harvey Oswald, shortly before the death, before the shooting? It's horrible.

[wonkbar]<a href="http://wonkette.com/523390/forget-royal-baby-ted-cruz-has-mandate-of-heaven-says-ted-cruzs-dad"></a>[/wonkbar]Um, OK, so two things. When Trump says "what [Big Rafael] is saying" is "horrible," he's talking about how Daddy Cruz said his foreign-born Canadian son would be Jesus's pick for president. He's been saying that shit FOREVER. Now, yr Wonkette is tight with the Lord and we feel safe saying Jesus hates Ted Cruz just as much as everybody else does. We ALSO firmly believe Jesus would never buy a Make America Great Again hat, because it would mess up His luscious savior locks.

[wonkbar]<a href="http://wonkette.com/600012/is-ted-cruz-adulterous-foreign-born-whore-maybe"></a>[/wonkbar]The second thing is that Donald Trump and the Enquirer are serious butt buddies. The paper has been all over Ted Cruz recently, with its (alleged!) revelations that Ted Cruz likes to pick at his tiny maple syrup-stained icky dicky until it achieves "erection" and then stick it inside ladies what are not his wife. Is that true? Or is it a bunch off hoo-ha-hockey-sticks bullroar? DUNNO!

Same goes for these "revelations." Ted Cruz's dad is PRETTY GROSS, but does that make him a murderer? We like to be fair. On the one hand, he used to drink the devil semen known as alky-hol, and sometimes people do pretty wild and crazy things when they're drunk! But they usually don't kill JFK.

[wonkbar]<a href="http://wonkette.com/597420/ted-cruzs-fundie-dad-thinks-god-did-bang-up-job-writing-u-s-constitution"></a>[/wonkbar]On the OTHER hand, when Rafael Cruz The Older gave his life to Jesus, he went full-on zealot (replaced one addiction for another, AHEM!) and so maybe he did that because he feels really guilty about some sins he did. Maybe he banged the all the loose women like his son (allegedly!) did, or maybe he helped his old pal Lee Harvey Oswald take JFK out.

WAS RAFAEL CRUZ THE SECOND SHOOTER?

J/K, there is never a second shooter.

Unless there was, and it was Rafael Cruz.