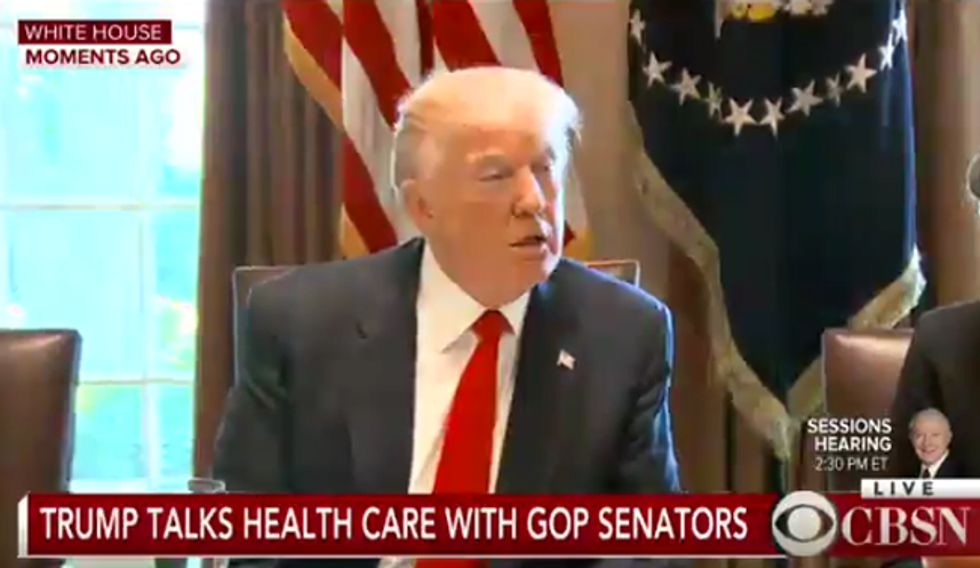 His well-done steak isn't the only thing that's hard to swallow.

Senate Republicans are continuing to work on some horrifying abomination of a bill to repeal the Affordable Care Act; they're also taking extraordinary steps to make sure no one knows what the hell is in the bill until they bring it to the floor for a vote. Probably because it's so terrific! If they manage to pull that off, it will be an amazing transformation of a lying talking point about Nancy Pelosi and the Affordable Care Act: We really won't see what's in it until it's passed. (No, Pelosi didn't say Dems had no idea what was in the bill. She said once it was passed -- after dozens of public hearings and after it had been available to read online for months -- people would like what they found in it.)

Happily, Americans can be delighted to know that Donald Trump is on their sides, or at least made another pretense of it, as he has done from time to time. During a closed meeting with Republican senators Tuesday, Trump apparently called the House version of the American Health Care Act "mean" and urged the senators to "improve" it. You know, so it will wipe out health insurance for maybe 20 million Americans instead of 23 million, and perhaps roll back the Medicaid expansion in seven years instead of three. Because Donald Trump is a humanitarian.

Why, yes, this is indeed the same Donald Trump who held a great big party in the White House Rose Garden to celebrate the passage of that mean old AHCA that he now thinks needs to be less mean. Or at least says so, for the moment.

Senate Republican Conference Chairman John Thune (R-S.D.), who attended the lunch, said Trump talked about “making sure that we have a bill that protects people with preexisting conditions” and how to design a tax credit for purchasing insurance that works for lower-income and elderly people in particular.

“I think he realizes, you know, our bill is going to move, probably, from where the House was and he seems fine with that,” Thune said. “He talked about making sure that we have a bill that protects people with preexisting conditions.”

Kill it! Kill it with fire!

Oh, but all the Rs have already been insisting the House bill DOES protect people with preexisting conditions, because they can't be denied insurance. All they have to do is find tens of thousands of extra dollars a year to pay for it.

The New York Times cited congressional aides who said Trump said some very nice things about how the ACA repeal should be repealed:

“I really appreciate what you’re doing to come out with a bill that’s going to be a phenomenal bill for the people of our country: generous, kind, with heart,” Mr. Trump told his guests in the Cabinet Room. “That’s what I’m saying. And that may be adding additional money into it.”

It was unclear to lawmakers what Mr. Trump meant by “generous,” although it seemed a likely reference to tax credits that would make health insurance more affordable.

Or maybe he meant it should include more generous tax cuts for the richest Americans, who will benefit the most from repeal of the ACA -- we do need to think about all the stakeholders here, after all.

At least one source said the president called the House version of the AHCA "cold hearted" and a "son of a bitch," although it's not clear who the bitch in question would be. Let's just assume it was the entire Republican agenda since Old Mother Reagan. Hey, you know who else is notorious for being a mean son of a bitch? Maybe someone who'd leave tens of millions with no health insurance.

Obviously, no one should get their hopes up -- Trump insisted his Obamacare replacement would "cover everyone," and then praised the House version of the bill as having actually done that, because it passed, didn't it? So there's almost no chance Trump will really insist on the Senate bill being any less of a monster than the House's, although senators looking at 2018 may give some thought to at least trying something that will let them win another term -- hence the compassionate suggestion to delay the rollback of Medicaid expansion by a few years. Maybe people will forget who did that!

In another bit of news that ought to make Republicans hang their head in shame, crowdfunding businesses are looking forward to a boom in new business if the ACA is repealed. Even now, appeals to help families with healthcare emergencies make up nearly half the amount of money raised by GoFundMe. Isn't that terrific? Once the ACA is gone, we can surely count on even more Americans to show they care by setting up charitable appeals for other Americans in crisis, with a cut going, of course, to the crowdfunding companies. It's a beautiful thing, and reminds us of this brilliant Tweet from a Canadian a few weeks ago:

Nahh, can't see how that would ever work. Where are the profits?

Yr Wonkette is supported by reader donations. Please click the "Donate" clicky below to help us bring you more coverage of the Senate's healthcare fuckery. It'll be fantastic, believe me.