Donald Trump Thinks Gays Are Just Terrific, Unless He Doesn't. Who Even Knows? 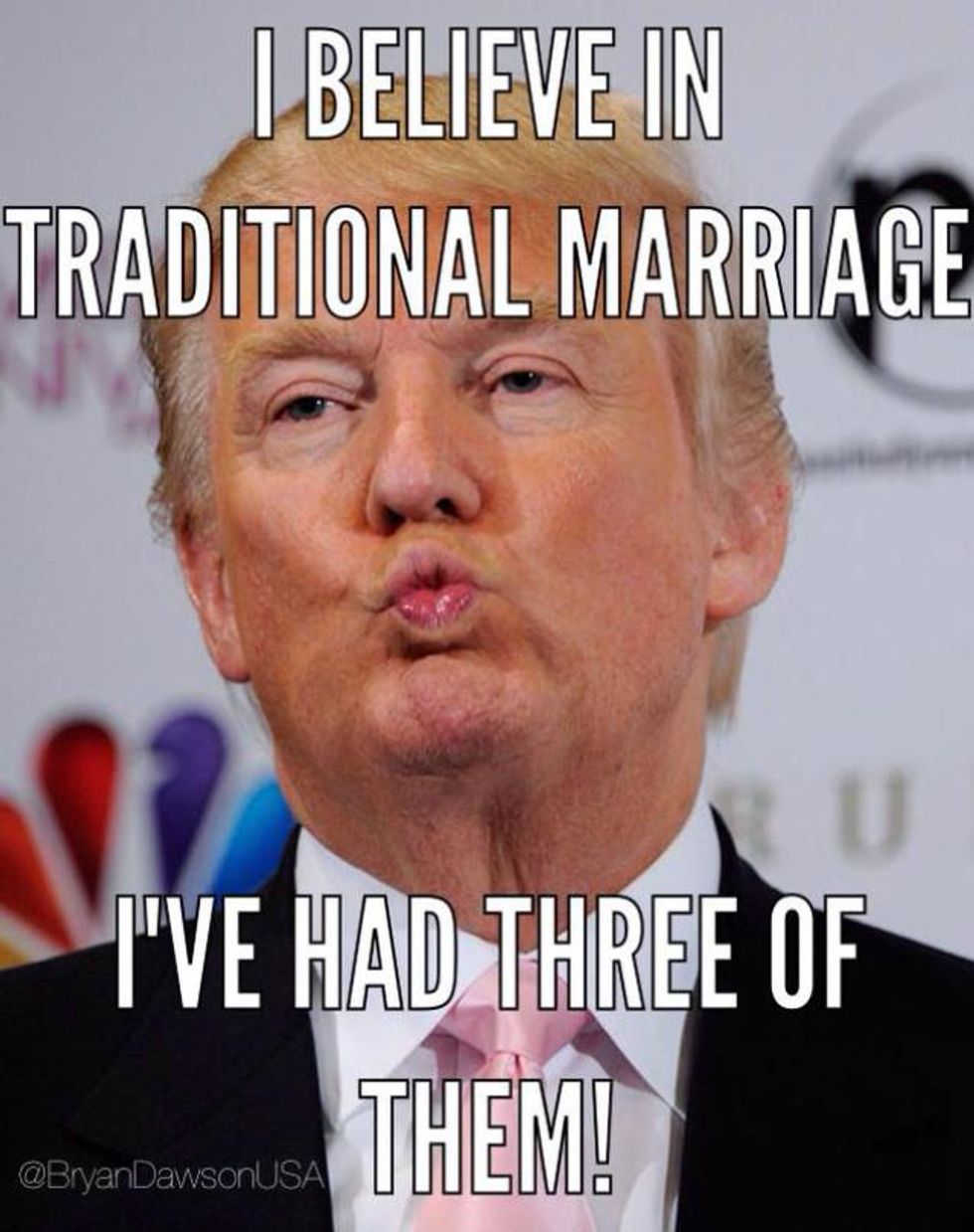 there's that appleheaded vagina mouth we love so much

[contextly_sidebar id="J4q4IZw9hLUzHQkbKyXbIyEcrsAgw98k"]Raise your hand if you think Donald Trump believes even half of the stuff that comes out of his mouth. Now if your hand is raised, use it to slap yourself in the face and ask yourself why you are hitting yourself, because you are WRONG. Case in point: Trump talked to a reporter Thursday, and shared his traditional evangelical beliefs about gay rights:

"When President Trump is in office can we look for more forward motion on equality for gays and lesbians?," [Bay Windows publisher Sue] O'Connell asked.

"Well, you can," Trump, speaking in New Hampshire ahead of Tuesday's primary, said. "We're going to bring people together, and that's your thing, and other people have their thing. We have to bring all people together and if we don't we're not going to have a country anymore."

[contextly_sidebar id="Ar7GHERBQZxitpLtjeKfoUHam96dHYNi"]Everybody has a thing. Some people like those little Jesus crackers they serve during the "NOM NOM NOM" part of the eucharist, and some people think sex thoughts about their daughters. Oh wait, those are both Donald Trump's "things." And then there are those, like gays, who are really into gay stuff.

But wait and what huh? Because didn't Trump just say to the "Fox News Sunday" program that he would absolutely try to appoint Supreme Court justices who would overturn Obergefell v. Hodges, also known as The Great Supreme Court Gay Marriage Throatcrammin'? Yes, he did!

So what gives? Well, you see, the reporter Sue O'Connell who got Trump to say sweet talk about the homosexuals is a known Lesbinesian. When he was on the Fox News, on the other hand, he was talking for the benefit of the crusty old bigot turds who watch THAT network. He's a salesman. He knows what to say to his audience, even if it's the exact opposite of what he's going to say to the next audience.

And the thing is, this contradiction has always existed in the political incarnation of Trump. As blogger David Badash 'splains, Trump has said a thousand times that he's just not into the same-genital marriages, but yet did you also know how "fabulous" his gay friends are? (They're probably all Melania and Ivanka's brunch pals, that's why they're so fabulous.)

[contextly_sidebar id="kXDKtUH5djOXmCfcvqT79kYRcu2qsgTD"]The point is that Trump opens his mouth and regurgitates whatever word vomit he thinks is appropriate for the situation. Remember that time one of his rabies-infested supporters said we need to kill all the Muslims, and all the internets thought Trump agreed that yes, let's do that right now? He didn't actually say that, but he gave his pat answer of, "We’re going to be looking at that and plenty of other things," which is his way of saying that he loves you AND your bigotry, and he's listening.

[contextly_sidebar id="D0YhD0Pjf5Hjq0oEhCGlSeEDYVAmxIHa"]He of course later said yeah, sure, let's deport all the Muslims, even the American citizen ones. Oh, and should Muslims carry ID cards? Sure, we're gonna be looking at all the things, yadda yadda.

And thus with the gaysexual lesbyterians. Donald Trump will bring all the people together, and he will Make America Fabulous Again! Unless he doesn't, oh fuck it.