Donald Trump To Address Congress Tonight, Because That's What 'Presidents' Do 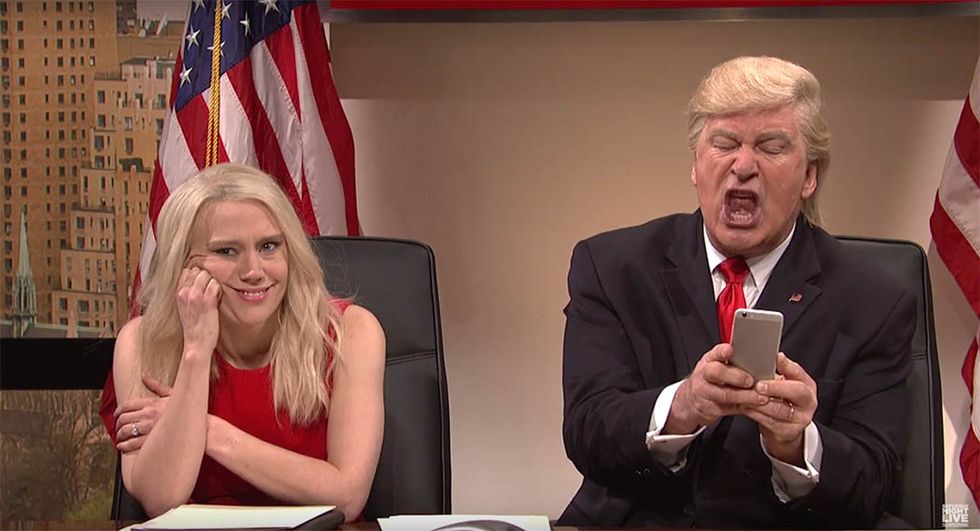 Dunno if Kellyanne will get to talk too, but probably not.

It's a dark day in America. Of course in some ways it is a very happy day, because it is Mardi Gras! But Donald Trump is also making the trip from the White House over to the Capitol, avoiding all the stairs along the way and possibly forcing Kellyanne Conway to carry him across the ones that can't be avoided, to address a joint session of Congress at 9 PM Eastern Time. It will be very bad!

As usual, you have questions, and we have vaguely factual answers:

What will Trump talk about with his weird vagina-lookin' mouth?

Oh, we imagine he'll just talk about his yoooge electoral college win (it wasn't), and how MSNBC's Katy Tur refuses to talk about how his crowd for the speech tonight is so massive, and how the media's not reporting on the 100-mile line around the block, of people waiting to see the "president" speak to Congress.

After he bitches for 4,000 minutes, he will vaguely talk about how he's going to make America great again, so great, we're going to win so much we'll get tired of winning, and boy you're going to love his replacement for Obamacare, just as soon as he figures out what it is.

Is this worth our time?

Oh hell to the fuck no.

Who will Trump's special guests be?????

Vladimir Putin, Russian pee hookers (allegedly!) and all the finest pussy the "president" has ever grabbed!

OK. It will be dead Antonin Scalia's wife, and also some families who got hurted by illegal immigrants, not that Trump is trying to convince Americans that illegal Mexicans are the source of all our problems.

Is this the State Of The Union?

Nah, usually the president doesn't really do one of those until he's been in office for a year, and we're crossing our fingers that Mike Pence and Congress and the FBI make sure Trump doesn't get that far.

Does Donald Trump not know it is Mardi Gras, and that he probably should refrain from bothering America when we probably have something else to do that night?

Surely, he knows! We bet he will celebrate Mardi Gras right after his speech, in just the same way he celebrated at the steakhouse at his Trump hotel in DC the other night, by eating a charred, overdone steak slathered with ketchup, like classy people with adult palates do.

How do we watch this shitshow that is not a State Of The Union, but will surely be very embarrassing to America all the same?

It will be on all the major TV networks, or you can watch it streaming on internets RIGHT HERE. Or maybe literally "right here" at Wonkette, if we find an embeddable livestream!

Alternately, you can just watch reruns of "Saturday Night Live" with Alec Baldwin, because that would be the same.

And will Wonkette be liveblogging, or do you plan to leave us all alone with Orange Hitler on the TV?

Yes, Rebecca says she will be here! You will be safe!

Is Wonkette ad-free now and fully reader-supported, and should we give you some dollars right now to keep those stanky ads off our browsers?

FUNNY YOU SHOULD ASK, OH YOU ARE SO THOUGHTFUL! Yes, here is your donation link. See you tonight!