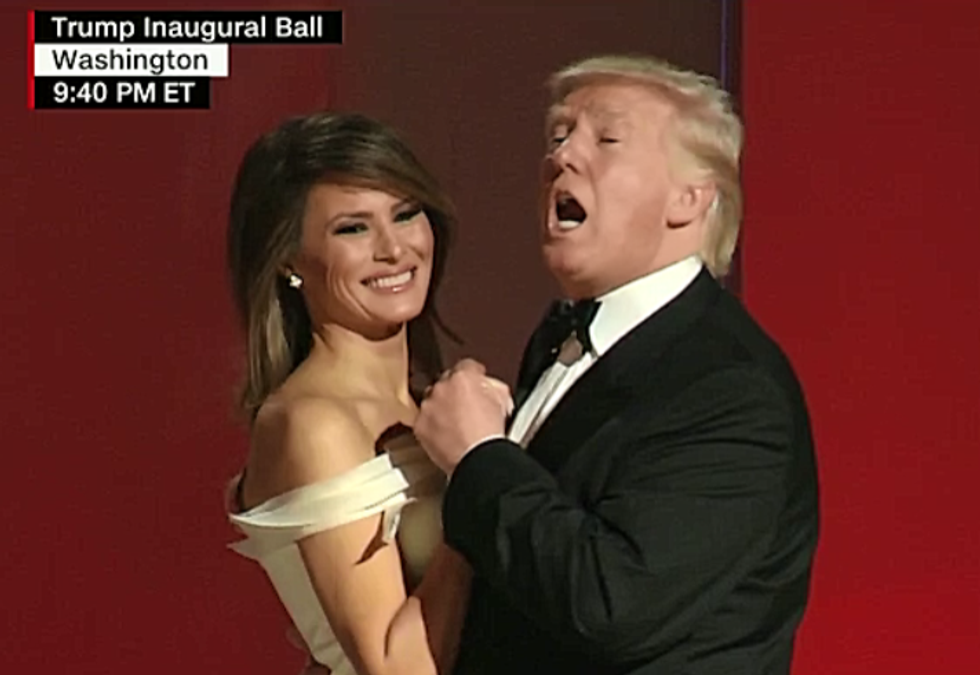 They care, they really care!

They've been saying we all need to stop flapping our yaps and give this new president a chance, so we have a nice story to tell you about Donald Trump, the empty orange ferret carcass Steve Bannon allows to act as if he is "president," and all the money he is going to raise for refugees who have been hurt by Donald Trump. Isn't that nice? Isn't your black liberal heart softening just a little bit right now, toward Pussgrab McLoser?

You see, the International Red Cross Ball will be held Saturday at Trump's Mar-A-Lago, and the "president" will be at it, as will Melon Trump, and they will have their own table, which we're sure they donated lots of their own moneys to get, uh huh ayup you bet. Isn't that nice? The event is expecting MANY PROTESTERS, but we don't know why those liberals don't just go get a job and move out of their moms' basements, because here's why:

The event could help the Red Cross provide assistance to those affected by Trump’s controversial executive order halting refugee admissions and travel from seven nations. Red Cross spokeswoman Jeanne Hamrick said that the organization has received at least one request to help people affected by the travel ban.

“The American Red Cross, when requested by local authorities, will provide basic support to stranded travelers affected by the recent executive order on immigration, including providing food and water at ports of entry; blankets, toiletries and other aid; and health, mental health and spiritual care services,” Hamrick said.

Surely by the end of the Trump regime, the Red Cross will have to spend BILLIONS of hours and dollars helping people victimized by Trump, so it's nice that the "president" will show up and help raise money for them. And there will be many other foreign dignitaries there too, just not from Mexico or Australia, according to the Palm Beach Daily News, because obvious. (We actually don't know if their absence is related to Donald Trump being bad at phone calls and threatening to invade our allies, but we doubt those calls encouraged either nation to go wine and dine with Trump at Mar-A-Lago.)

Of course, as the Palm Beach Post points out, the International Red Cross Ball has been happening annually since 1957, and it's always either at Mar-A-Lago or The Breakers, so don't call the Red Cross and yell at them for being political. In fact, their spokesperson emphasizes that the organization is NOT political, supports the rights of the protesters, but also doesn't want that to affect the work the Red Cross is doing:

In response to this year’s planned protests, Hamrick said, “We respect the right of all people to express their views and are thankful to live in a country where such discourse is embraced. We hope these expressions will not hinder the efforts of an impartial humanitarian organization that serves the urgent needs of people at home and around the world.”

That's nice. Remember, protesters, you are there to yell at the vicious thin-skinned grump in the White House, and not at the Red Cross, which will have to pick up the pieces from Trump's exploits, especially since Trump is already openly and flagrantly ignoring the many court orders against his Muslim ban.

[wonkbar]<a href="http://wonkette.com/611246/kellyanne-conway-remembers-that-time-she-died-in-the-bowling-green-massacre"></a>[/wonkbar]Of course, if you are a Trump voter, you probably wonder why we should be raising money for the Red Cross anyway, since they openly admit to helping gross brown foreigns from Not America. In that case, we recommend you keep your money at home and support the many people who lost their lives, livelihoods and limbs in the Bowling Green Massacre, which totally happened. You may contribute by clicking here.