Donald Trump Will Totally Abandon His Business Empire, Ayup You Betcha, Sounds Legit To Us! 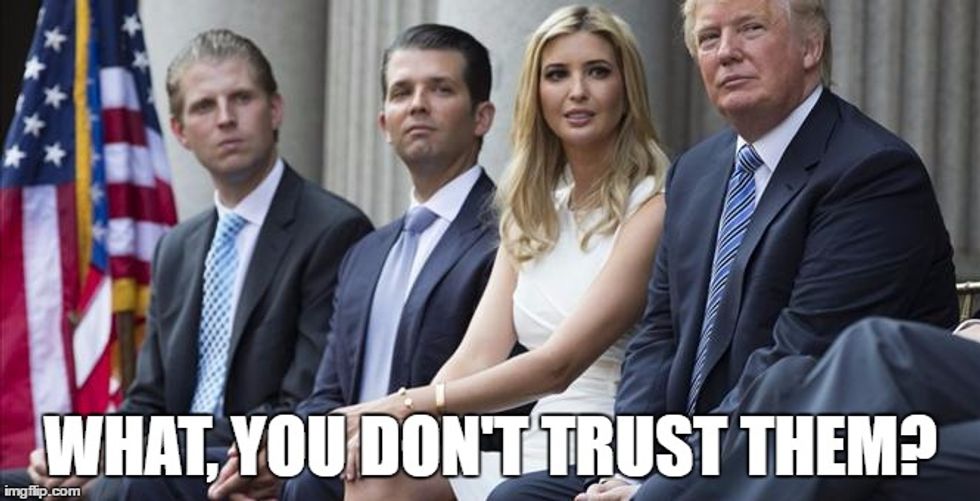 Another day, another announcement from Dear Leader on the Twitter. (We know, we told you to unfollow him, but we also said when something of significance happens on his Twitter, you'd hear about it. LOOK AT YOU HEARING ABOUT IT.) Trump did a golden shower of tweets Wednesday morning about how he was going to make a Very Important Announcement, alongside his spawn, about how he's getting out of the business of Being Trump, in order to focus on the work of Making America Great Again. For the sake of space, and because you don't actually want to look at his Twitterface, here is the text:

I will be holding a major news conference in New York City with my children on December 15 to discuss the fact that I will be leaving my great business in total in order to fully focus on running the country in order to MAKE AMERICA GREAT AGAIN! While I am not mandated to do this under the law, I feel it is visually important, as President, to in no way have a conflict of interest with my various businesses. Hence, legal documents are being crafted which take me completely out of business operations. The Presidency is a far more important task!

Actually, as to "under the law," a lot of people are talking about a thing called the "Emoluments Clause," which is in a quaint little document called the "U.S. Constitution," that expressly forbids an elected official from getting sexxxy financial gifts from foreign governments. The sheer amount of business the Trump Organization does around the world opens him right up to the possibility of foreign governments trying to win favor with the U.S. American president, by giving his businesses special treatment. In fact, scholars are pretty sure that's exactly what's going to happen. (Hey look, it's the nation of Bahrain, doing a swanky event at Trump's DC hotel! The one owned by the federal government and leased by the Trump organization! Wonder why they're doing it there? HUH.) Read this Vox 'splainer for more on the Emoluments Clause and how Trump will violate it in his sleep the first day he is preznit!

But C'MON YOU GUYS, didn't Trump JUST TWEET that he's removing himself "in total" from his "business operations," because "visually important"? (Hahahahaha, he admitted it's just for "visuals." Jackass.)

Experts say fuck right off with that noise, as this resolves nada, not shit, nothing, no way no how.

For one thing, Trump has been saying forever that he's going to turn his business over to his kids, which is not a very good solution, unless he's planning to never speak to them again, oh wait, they're sitting in when he visits with cabinet appointees and it looks like he wants to put his son-in-law Jared Kushner in his administration somewhere.

Greg Sargent quotes a whole passel of experts over at the Washington Post, explaining that the issue here is ownership, and whether Trump can ever actually truly divest himself of all interests in his business empire. Here is Norm Eisen, a former Obama ethics lawyer, telling Greg Sargent the things:

The president elect said he will exit his “business operations.” That’s not enough. Although it is important that he have no involvement in operations, in order to avoid conflicts, he must also exit business ownership through using a blind trust or equivalent. Otherwise he will have an interest in his businesses that will sometimes conflict with the public interest, and constantly raise questions. For example, unless he divests ownership, he will have an interest in the foreign government payments and benefits that flow to his businesses daily. That creates such a serious conflict of interest that the framers of the constitution prohibited it for the president in the emoluments clause. Far smaller potential conflicts led every president for four decades to do a blind trust or the equivalent, and so should Trump.

Is Trump going to do that? Or will his Major Announcement just be that Ivanka will run the businesses and she promises never to say anything about them to Jared after they gay-bang each other, like gay-married straight couples do? No talkie-talkie on the Obamaphone about the business empire with the offspring? Doubtful! Again, the kids are all up in the transition process, and Sargent quotes Eisen as saying they need to GTFO of that process if they remotely want this to look good, for "visuals."

Here is another expert person, in the Washington Post:

“Even if he sold his interest to his family or gave it to them, and completely renounced his own interest, he still naturally has an incentive to have things go well for his family,” Noah Bookbinder, the executive director for Citizens for Responsibility and Ethics in Washington, told me. “As long as those interests remain, there will be questions about what his motivations and incentives are and whether he’s truly acting in the interests of the American people.”

“Even if he didn’t have the business interests and his children did,” Bookbinder continued, “there would be a lot of incentive for companies and countries to try to influence him by giving financial benefits to his children or companies in the form of discounts or special deals that they wouldn’t receive otherwise.”

But yet, we're supposed to believe this is all going to be above board and squeaky clean. Yeah right.

What if the big announcement is that Trump and his kids are selling the company off to the highest bidder? Would that even work? Josh Marshall at Talking Points Memo notes that the entirety of Trump's business model is using the Trump name to funnel money to the Trumps, one of whom is now the president-elect of the US of A. As Marshall explains, "[T]here's no way to sell this operation to Larry Stein and have these gaudy monstrosities become Stein Towers." So ... HM! Something tells us the Trump kids wouldn't go for that anyhow, dunno why, just a hunch.

Regardless of whatever yooooge announcement Trump and his goon children have planned for December 15, will Trump be held accountable for all the potential conflicts of interest his business creates? HAHAHA WE GUESS MAYBE, but let's not get our hopes fully erect. As the WaPo points out, from the governmental side, it would fall to House Republicans to do oversight, HAHAHAHA. And from a media perspective, Think Progress has collected a bunch of tweets from the lapdog media already dutifully reporting what Orange Hitler tweeted about how he's "leaving the family business." Nothing to see here!

In summary and in conclusion, everything is terrible and a giant minority of voters have elected a kleptocratic oligarch as president and that's just awesome, AMERICA FUCK YEAH.