Donald Trump Would Like His Personal Pilot To Head The FAA, Or Maybe Solve Middle East, One Or The Other 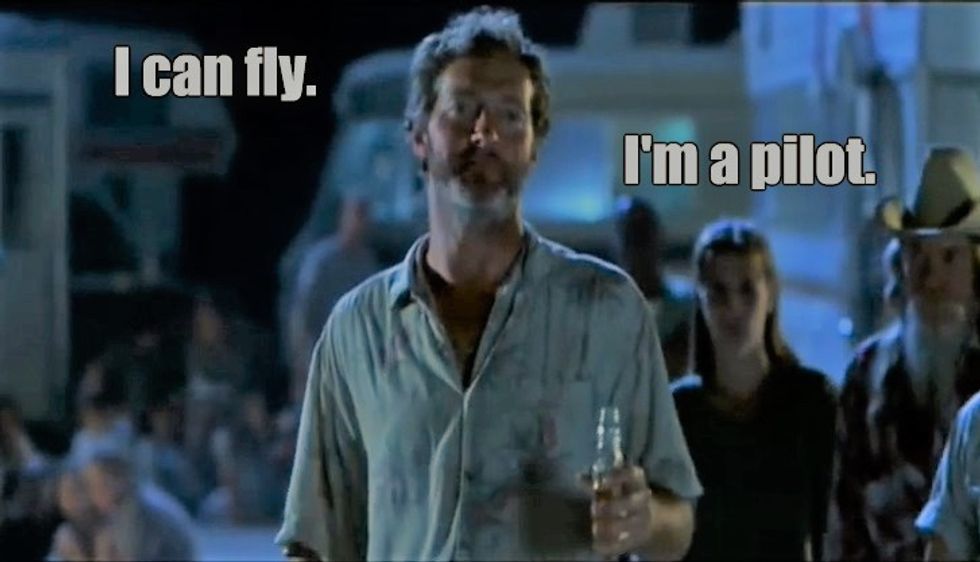 Looks like we picked the wrong day to quit sniffing glue

Axios reported last night that Donald Trump has a TERRIFIC choice to head the Federal Aviation Administration. One of the people on the short list is Trump's personal pilot, John Dunkin -- the guy who flew him all over the place in that private 757 and got him to all those rallies Trump loved so much, you know, he had the biggest crowds. Just tremendous crowds. Do you want to see his electoral map?

Yes, Trump's very own 757 driver really is one of the finalists to run America's civil aviation system; we'll assume his name got leaked either by a supporter who wanted to float it as a trial balloon (which are not regulated by the FAA), or perhaps by someone who thinks it's a perfectly terrible idea. We're guessing the source was a booster, maybe Trump himself, since Axios has a "senior administration official" saying Dunkin was recommended by Trump, and has already had an interview for the position.

That source explained Dunkin is "on the list because he's the president’s pilot, but if he gets the job it won't be because he's the president's pilot." So he totally has to prove he's up to the job. But honestly, could he really do a worse job of running the FAA than Scott Pruitt has done with EPA, Betsy DeVos has done at Education, or Mick Mulvaney is trying to do at the Consumer Financial "Protection" Bureau? Of course, it's only metaphorical when we talk about those agencies being run into the ground in a giant flaming fireball by the Trump administration.

There really does seem to be at least a small push in the administration to explain that this really isn't a completely insane choice by a "president" who thinks anyone who's worked for him (or been born to him) is obviously the best because he wouldn't have chosen anyone else. A second White House insider said Dunkin is a perfectly cromulent choice, and not simply because Donald Trump usually recognizes him well enough to smile and wave at:

“John Dunkin isn’t just a pilot," the administration official told me. "He’s managed airline and corporate flight departments, certified airlines from start-up under FAA regulations, and oversaw the Trump presidential campaign’s air fleet, which included managing all aviation transportation for travel to 203 cities in 43 states over the course of 21 months.”

Oh, the campaign's air fleet! The very air fleet that Trump's campaign paid a Trump-owned company, TAG Air ("Trump Air Group," which isn't merely narcissistic, it's redundant), big big bucks ($6.7 million by the final months of the campaign) for the use of planes and helicopters. Which the campaign also charged the Secret Service millions to ride along on. Wonder if there are any ways the FAA could be reformed to funnel some cash to the Trump Organization?

Then again, maybe grifting has nothing to do with Dunkin being among the finalists for the FAA job. As WaPo notes, Trump has frequently talked about what a great aviation expert his personal pilot is:

During a meeting with top airline executives a year ago, he relayed that one of his most trusted sources about the nation’s aviation system was his personal pilot.

“I have a pilot who's a real expert,” Trump said at the meeting. “My pilot, he's a smart guy, and he knows what's going on.”

This being Donald Trump, there is of course an anecdote to explain why Trump might really think Dunkin's the tits:

Dunkin has told people that when he used to fly Trump around on his private Boeing 757, they'd often find themselves stuck on the tarmac with delays. He'd tell Trump that none of this would happen if a pilot ran the FAA.

Really, is there any question of his qualifications? The only way he could be any more qualified would be if he also had a gun to shoot all the hijackers. And as it happens, Trump brought up that very question last February at that meeting with the airline execs, asking if then-FAA Administrator Michael Huerta, who clearly didn't know anything:

"Is the gentleman who’s the head of the FAA right now not a pilot?" Trump asked the executives. "I’d like to find out because I think it maybe would be good to have a pilot — like a really good pilot that knows what’s going on. ... I would think you need a very sophisticated person in that job."

Huerta's term ended in January; his obvious lack of experience (a career in the Department of Transportation) didn't keep Trump from taking credit for the lack of any airline crashes in 2017.

Both Axios and WaPo point out that there are at least a couple other qualified candidates who haven't personally jetted Donald Trump anywhere, like US Rep. Sam Graves, who has co-chaired the House's General Aviation Caucus, and the current acting head of the FAA, Dan Elwell, who was previously the FAA's deputy administrator. Elwell is a former airline pilot and executive at American Airlines, so some crazy people might actually consider him more qualified than Dunkin. But will he swear undying fealty to Trump?

Yr Wonkette is supported by reader donations. Please click here to be the wind beneath our wings.