Donald Trump Would Like To Confuse You About Migrant Kids. How About 'No.' 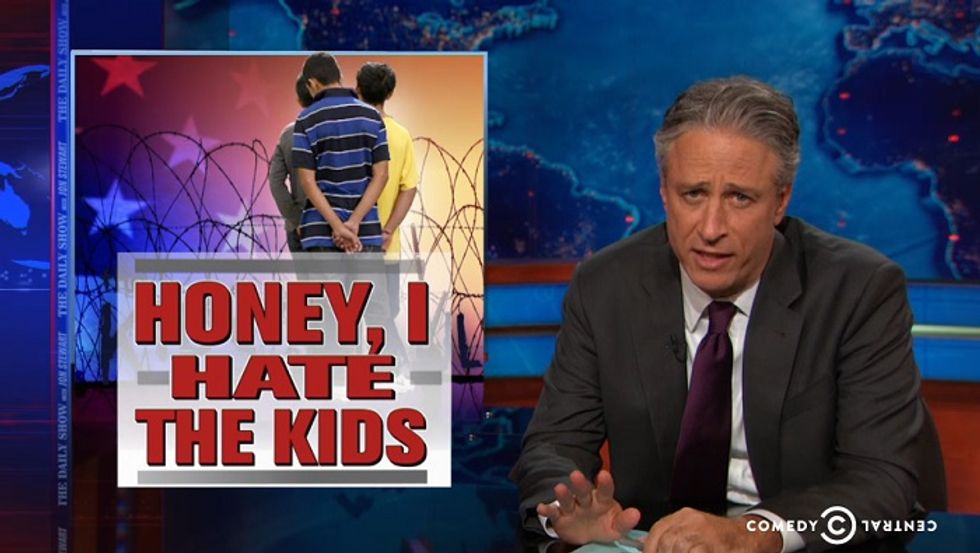 Donald Trump is up and lying about immigration again, so that must make it a day when his (non-secured) phone is charged. Saturday, he tried to fool Americans with this whopper:

Put pressure on the Democrats to end the horrible law that separates children from there parents once they cross the Border into the U.S. Catch and Release, Lottery and Chain must also go with it and we MUST continue building the WALL! DEMOCRATS ARE PROTECTING MS-13 THUGS.

Nope, nope, nope, not true at all. There's no law requiring separation of kids from families. It's all the doing of Trump and Company, starting with a brilliant idea from John Kelly and finally rolled out as official policy by Jeff Sessions last month. And just in case you need it 'splained to you, no, Democrats aren't actually fans of MS-13 -- but they have this crazy idea that using MS-13 panic to whip up hatred of all immigrants is just the slightest bit sleazy.

But OMG, this morning Trump had another shocker! It turns out that some people on Twitter made a mistake, and are just plain LYING about immigration, and if there's anything Donald Trump can't stand, it's inaccuracies on Twitter.

Democrats mistakenly tweet 2014 pictures from Obama’s term showing children from the Border in steel cages. They thought it was recent pictures in order to make us look bad, but backfires. Dems must agree to Wall and new Border Protection for good of country...Bipartisan Bill!

And by golly, you could indeed find photos on Twitter of ICE shelters crammed with unaccompanied minors from the 2014-2015 influx of kids fleeing violence in Central America. No, these are not current photos:

This is how America houses the undocumented children stolen from their parents.

So yes, that particular wave on unaccompanied kids was from 2014, at the peak of the migrant-kid crisis. But let's not forget that at the time, Trump and anti-immigrant cronies were warning that the kids were actually radical Islamic terrorists and bringers of disease. (and for that matter outright lies about Obama housing ILLEGAL ALIENS in LUXURY RESORTS!) Hey, why not confuse the issue even further and insist family separation can only end if Democrats agree to build your damn wall and screw legal immigration for generations? As for bipartisan bills, John Kelly and Stephen Miller already reminded Trump he HATES those.

So let's take a moment to review: Everything Trump says about immigration is a lie. BUT! Trump is also happy to exploit a lot of confusion over three separate issues, because when HASN'T Trump been happy to exploit confusion? It's how he got elected. So let's break things down a little without getting into the weeds (while also inviting you, dear Wonkers, to go get into those weeds yourselves):

There are three stories. One is an ACLU report on mistreatment on minors in government custody. One is kids that have "gone missing" after they were placed in foster care or with extended family. The third is the Trump administration's policy of separating children from their families at the border. Problem is, in last week's sudden rush of outrage over the family separation policy, all three issues got conflated, and that conflation could actually be quite bad for migrant kids. So a quickie de-conflation, with sources for you to go nuts on:

1) The ACLU report: This is about documents the ACLU obtained through a FOIA request, and details abuses against migrant kids held by Customs and Border Protection between 2009 and 2014. (Yes, during the Obama administration. Please see this thread which discusses Obama's successes and failures on immigration, specifically his war with ICE. Spoiler: Not perfect by a long shot, but infinitely better than Trump.) While it isn't directly related to the New Cruelty's policy of separating children from their parents, it found that the officials who let the abuses happen were never held responsible, and it only stands to reason that as the government ramps up its family separation policy, abuses are likely to increase.

2) The "missing" kids: These are unaccompanied kids who were placed in foster care through the Office of Refugee Resettlement (part of Health and Human Services) after they arrived in the USA without parents -- almost all of them fleeing violence in Central America, mostly during that 2014-2015 influx. Last week, the story -- which first broke in April -- resurfaced in light of people's horror over the Trump policy of separating kids from their parents -- and often not re-connecting them once the parents were deported.

3) Trump's Family Separation Policy: This is Jeff Sessions's bold new policy of prosecuting all migrants who don't cross at official ports of entry with illegal entry to the USA. As a result, since they're facing criminal charges, their children are taken away and "put in foster care or whatever," as John Kelly put it so compassionately.

Here is an excellent 'splainer by immigration lawyer Josie Duffy Rice on why it's important not to mix up the "missing" kids with the family separation policy. The gist is that the vast majority of those kids were placed with family members after arriving alone in the USA. And they're not so much missing as hiding -- the Office of Refugee Resettlement's only effort to follow up on the kids was to make phone calls. And with the Trump administration going after all undocumented migrants (and plenty of people who are here perfectly legally!) a lot of families simply went off the grid. They don't WANT the government to find them for fear that undocumented members of their families will be deported. Demanding the government "find" these "missing" kids is a recipe for more deportations.

To muddy the waters further, under the New Cruelty policy of family separation, ICE and ORR are using the same term that applied to the kids who did come here on their own: "unaccompanied alien children." Never mind that when they got here, they had parents; the government is treating them as "unaccompanied" because after all, once the babies have been ripped out of their mothers' arms, that makes them unaccompanied, now doesn't it? Yes, that's a calculated misapplication of bureaucratic terminology meant to confuse the issue.

Imagine that. And yes, it's entirely likely that if the government can continue to confuse its family separation policy with the "missing" kids, it will use that confusion as an excuse to never release any kids separated from their parents to the care of relatives. And all of that will help with the larger goal: scaring people, even asylum seekers, from coming to the USA. As Trump likes to yell at his staff in private, "We're Closed!" We don't do decency anymore.