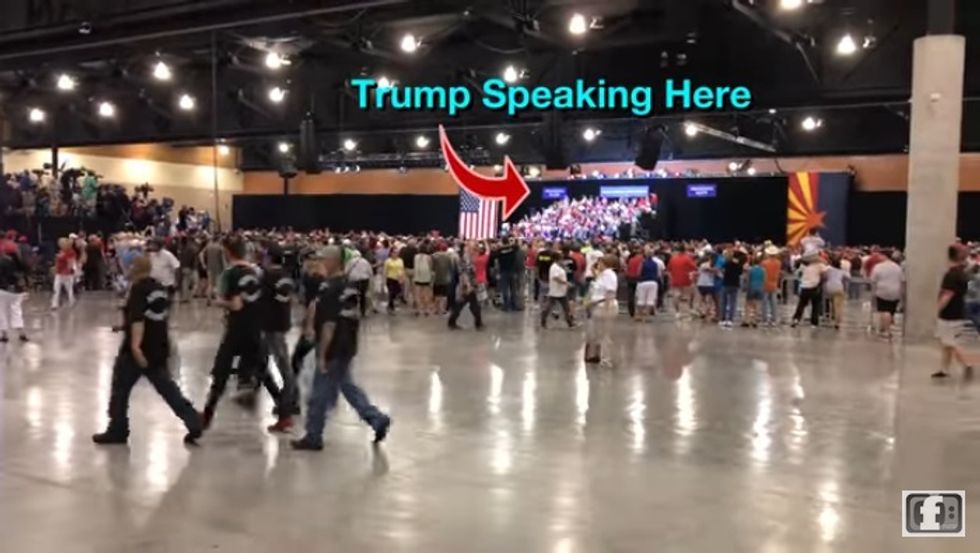 Yes, but what about the thousands still streaming in? Surely Trump wouldn't lie about crowd size!

Bloomberg reporters Jennifer Jacobs and Kevin Cirilli got themselves a bit of a scoop: They've discovered at least part of the reason Donald Trump seemed quite a bit more unhinged than usual at his Phoenix rally last week. He was very angry that his advance people hadn't managed to pack the part of the Phoenix Convention Center used for the event, and was actually so pissy about it that he got rid of a longtime aide who'd been responsible for organizing most of his major campaign rallies. Fortunately, Trump does not yet have the power to demand the immediate beheading of lackeys who have disappointed him.

Trump was already steaming mad before the event started, it seems, because backstage, he saw on a TV monitor that the space simply wasn't filling up like he wanted.

As his surrogates warmed up the audience, the expanse of shiny concrete eventually filled in with cheering Trump fans. But it was too late for a longtime Trump aide, George Gigicos, the former White House director of advance who had organized the event as a contractor to the Republican National Committee. Trump later had his top security aide, Keith Schiller, inform Gigicos that he’d never manage a Trump rally again, according to three people familiar with the matter.

You'll note that Trump once again didn't have the guts to say "You're fired" to Gigicos himself. He was probably too busy Making America Great.

Gigicos probably also wondered why Trump kept reaching out his arm, making a gesture like he was closing his fingers around a throat, and saying in a bad James Earl Jones voice, "You have failed me for the last time." No one quite has the guts to tell Trump that he still needs a lot of experience points to add Force Choke to his inventory.

Well that was fucking nuts.

Obviously, since the crowd was smaller than he wanted it, Trump had to lie about how huge it was, insisting that it was so enormous that none of the crooked media would dare show it, and that the Secret Service had assured him that there were only a few protesters outside the Convention Center, which was also, of course, not the case. Bloomberg reports a city of Phoenix official put the number of people attending the rally at about 10,000, although HuffPo contributor Jon Hotchkiss estimated even fewer, about 4000:

Either way, Trump felt compelled to inflate the crowd size to fit his ego:

You know the turnout for the Phoenix rally is still bugging him -- nearly a week later, at Monday's presser with the Finnish primem minister, Trump felt compelled to mention how huge the crowd was:

You saw the massive crowd we had [...] The people went crazy when I said, ‘What do you think of Sheriff Joe?’ Or something to that effect.

Jacobs and Cirilli note that poor George Gigicos had already left his full-time White House job at the end of July to focus on his consulting business, but had remained a contractor organizing events for the neverending Trump campaign and the GOP. He wasn't exactly a rookie -- at organizing Trump rallies or at facing the Great Man's murderous wrath:

Gigicos organized all of Trump’s signature campaign events and his occasional rallies since entering office [...]

Over the past two years, Trump had often assigned the blame -- rightly or wrongly -- to Gigicos when his rally logistics weren’t perfect. But his irritation usually blew over quickly. When his microphone had problems at a rally in Pensacola, Florida, in January 2016, Trump bellowed: "The stupid mic keeps popping! Do you hear that, George? Don’t pay them! Don’t pay them!"

So that's nice, and at least now we know who GEORGE! was.

Donald Trump Hates This Stupid Mic, And He's Gonna Kill It And Its Whole Stupid Family!

Following his dismissal by Trump, Gigicos, who it turns out was among Trump's four longest-serving political aides, "declined to comment," presumably because he was already on the phone to an agent about a tell-all book.

Yr Wonkette is supported by reader donations. Click the "Donate" clicky to give us your money, and pray we do not alter the deal again.