Donald Trump's Base Weak, Flaccid, Shriveled, If You Know What We Mean 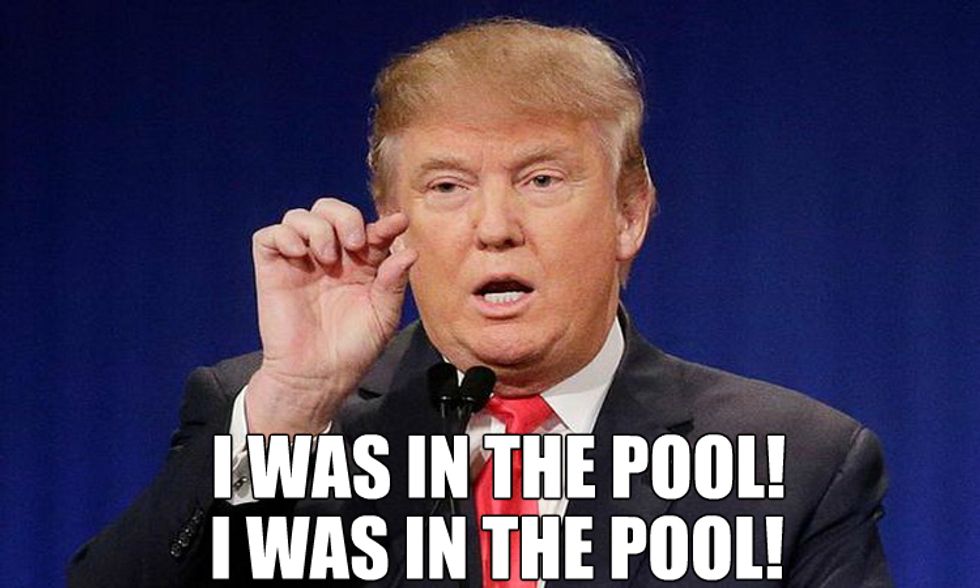 Nate Silver and the number-crunchers at FiveThirtyEight have been looking long and hard at Donald Trump's polls, and they're pretty sure his support is softening, even shrinking, which could mean that by 2018 Trump might, like many men in their 70s, have difficulty sustaining an election. It would be premature for Democrats to shout any ejaculations of joy, however, since Trump has often found ways to regain his stamina after people assumed his political fortunes had gone limp. Will Trump's seeming vigor stand up to months of scrutiny, or is it doomed to wither?

Silver notes the conventional wisdom that Trump has a fairly high floor of support, some 35 to 40 percent of voters who'll enthusiastically go along with Trump no matter how much he goes back on campaign promises and screws over the people who voted for him. He notes plenty of Trump voters either don't believe or don't care about Trump's problems with the Russia investigations and his tendency to say stuff that bears little resemblance to reality. Ah, but not so fast, says Silver -- it only looks like that if you're looking at poll numbers for Trump's over-all support. If you break down that total into the typical approval-poll categories of strongly approve, somewhat approve, somewhat disapprove and strongly disapprove, you see that the responses for "Strongly approve" have actually declined noticeably, especially after the passage of the House's Screw-Trump-Voters-Hardest healthcare bill:

After a slight uptick in the first two to three weeks of his term, Trump’s strong approval ratings have headed downward. But it hasn’t been a steady decline. Instead, they fell considerably from about 29 percent on March 6 — when Republicans introduced their health care bill — to around 24 percent on April 1, shortly after the GOP pulled the bill from the House floor. They then remained stable for much of April, before beginning to fall again this month after the reintroduction (and House passage) of the health care bill and after Trump fired FBI director James Comey on May 9. As of Tuesday, just 21.4 percent of Americans strongly approved of Trump’s performance.

If you want to compare that support to a good president, by April 2009 Barack Obama still had 45% strong support, although that slipped significantly by the middle of his second term, to the high teens. Silver also points out that as Trump's strong approval numbers have fallen, his numbers for "somewhat approve" has increased a bit over time, which "probably reflects voters who once strongly approved of Trump and who have now downgraded him to the somewhat approve category." This could turn into a problem over the next couple years if additional Screw-Trump-Voters measures are passed -- like his awful budget, or if the Senate also votes to leave tens of millions uninsured -- in which case "the next step for these somewhat approve voters would be to move toward disapproval of the president."

We wouldn't mind seeing that trend continue, honestly. Also, while the percentage of people who "somewhat disapprove" of Trump has bumped along at about ten percent, rising slightly, the numbers for "strongly disapprove" have increased significantly since January, from the mid-30s to 44.1 percent this week. Also not happy news for Trump: "In most surveys, Trump’s strongly disapprove rating exceeds his overall approval rating, in fact." Silver attributes the strong disapproval to a combination of dislike of Trump's policies and the changing opinions of people who were willing to give Trump the benefit of the doubt when he first took office. He's not winning new love, but he's making more people mad.

Finally, Silver notes, Trump won the Republican nomination with about 20 percent of the primary vote, which seems to be about where his strongest approval rating seems to hold steady. Most Republicans may have supported other candidates, but once Trump got the nomination, they held their noses and voted for him. Now that he's actually in office and screwing things up, the 20% of the electorate who gave him the nomination will stick with him no matter what, while other Republicans may be losing enthusiasm now that they got their stolen Supreme Court seat and there's no Hillary Clinton campaign to haunt their dreams (except of course on Fox News). Says Silver,

If those reluctant Trump supporters shift to being reluctant opponents instead, he’ll be in a lot of trouble, with consequences ranging from a midterm wave against Republicans to an increased likelihood of impeachment.

We certainly hope that turns out to be the case, but we're also not about to get overconfident like we were the first week in November. If anything, these trends are an excellent reason to make even more noise about just how awful Trump and his Republican fluffers are for the country, especially for red states. We don't have any hope the morons who think Pepe the Frog was the height of wit are redeemable, but if people start noticing they voted for a guy who conned the hell out of them, we should be happy to have them voting blue. Once they step through a metal detector, at least.

Yr Wonkette is supported by reader donations. Please click that "Donate" linky below to give us money, and we may just stay optimistic for another hour or so. No promises.