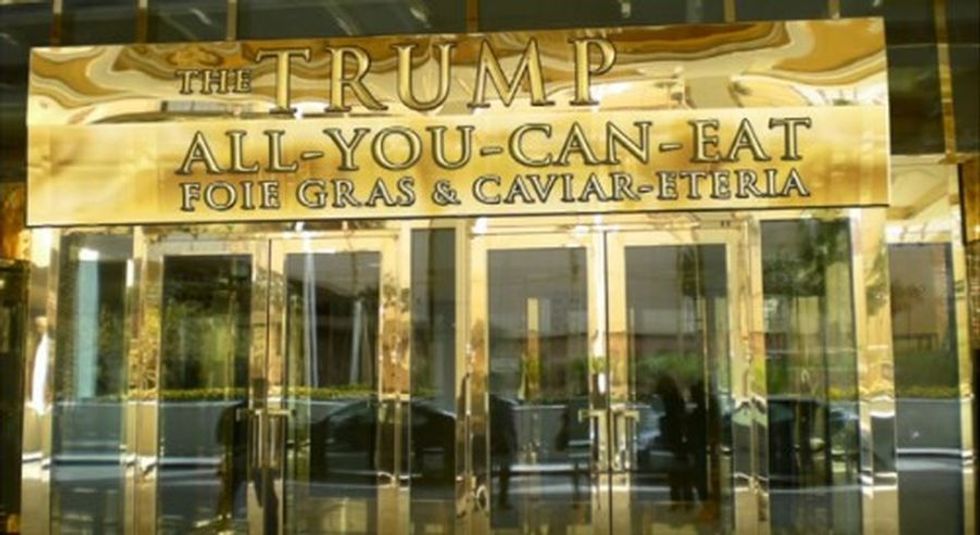 Donald Trump is a horrific amalgamation of spray-tan contents, bile, and discarded golden retriever hair -- on this, we can all agree. He's advocated for war crimes, spoken out against the First Amendment, and committed atrocities against decency almost too numerous to count. It's long past time, however, that we discussed this monster's crimes in another arena: food.

A Tuesday New York Times interview with his longtime butler Anthony Senecal illustrates just how much of a craven beast the Donald is when it comes to viciously murdering perfectly good cuts of meat:

Few people here can anticipate Mr. Trump’s demands and desires better than Mr. Senecal, 74, who has worked at the property for nearly 60 years, and for Mr. Trump for nearly 30 of them.

He understands Mr. Trump’s sleeping patterns and how he likes his steak (“It would rock on the plate, it was so well done”), and how Mr. Trump insists — despite the hair salon on the premises — on doing his own hair.

UNACCEPTABLE. This grievous violation of morality and taste buds shall not stand! We've been over this before, but we'll say it again: cooking steaks past the last vestige of edibility ("medium," and even that's pushing it) is a crime against nature that should not be borne by honest, god-fearing folk. At that point, just fry up a discount loafer from Payless; it'll taste the same and save you a lot of money.

No wonder Trump Steaks bombed so miserably. When John Lewis basically called Trump Joe McCarthy by asking "Have you no decency, sir?" on Twitter recently, we're pretty sure he was referring to the Republican frontunner's racist rhetoric and numerous incitements to violence, but he could just as easily have been talking about the man's meatflesh proclivities. We've been comparing Trump to Hitler a lot lately, but at least Hitler never cooked his steaks well done.

And well done steaks are far from Trump's original food sin. Surely we all remember him eating New York pizza -- NEW YORK PIZZA! -- with a knife and fucking fork, to which he offered the following stirring defense:

Frankly, it was very comfortable. Plus, this way you can take the top of the pizza off so you're not just eating the crust. I like to not eat the crust so we can keep the weight down at least as good as possible.

The idea that eating pizza with a knife and fork is always wrong is a fallacy; if you're eating actual Italian-style pizza, you basically have to, because they don't cut those things for you and at that point it's pretty much a 20-pound Triscuit. But New York pizza? This isn't some Chicago tomato sauce swimming pool for chipmunks horseshit we're talking about, here -- this is New York motherfucking pizza! That's like eating a hard shell taco with a knife and fork. Or a hamburger.

(We're aware that's how they actually eat hamburgers in Europe. It's weird as shit, and if that's the cost of socialized medicine and a decent income inequality gap, we're not certain we're willing to pay it.)

And those aren't even the only terrible things about Trump and food! He also adores fast food, specifically because he "likes cleanliness" and thinks fast food restaurants are cleaner than most other restaurants. Seriously. DON'T ANY OF YOU DARE TELL HIM.

He has said he particularly likes McDonald's "Fish Delight," which he probably eats while reading his favorite Bible passage, "Two Corinthians." Assuming Trump means the Filet O' Fish, which actually exists, he is essentially admitting that he enjoys having the Hudson River take a dump in his mouth. He has also said KFC is "not the worst thing in the world," which is the single most factually and objectively incorrect statement he has ever made -- and this is a man who has repeatedly claimed he has a tremendous, magnificent mantackle.

Donald Trump must be stopped. Sure, yeah, he can never be allowed to become president because he'd jumpstart the apocalypse the minute Vladimir Putin made a crack about his tiny hands, whatever. More importantly, though, he must be stopped from all the myriad barbarities against food he has perpetrated and will surely continue to perpetrate. We have a chance, here and now, to protect future generations from admiring filet mignon briquettes, KFC's Famous Slop n' Tub Receptacles, and New York pizza eaten like a particularly fussy 18th century British lord. We dare not let it pass us by.