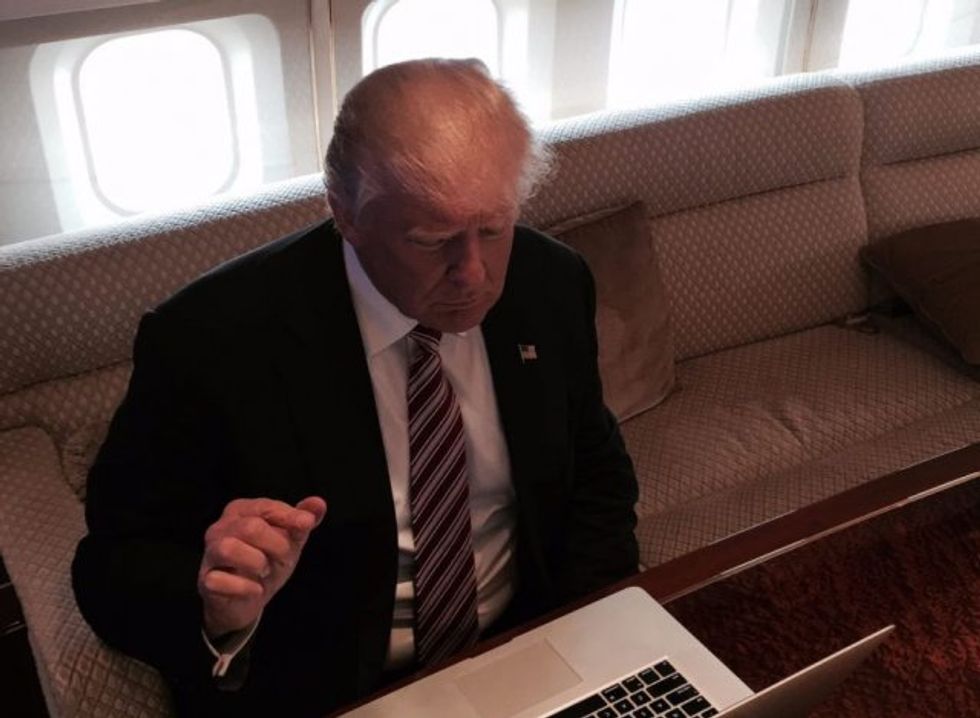 'Dear Mr. Trump. We at the NFL urge you not to get in our way.' There, that should do it

Donald Trump didn't just spend the weekend beating up on the family of a war hero, oh, heavens no! The man is a master of multi-weaseling, as he demonstrated in his Sunday interview with George Stephanopoulos on ABC's "This Week," when he complained that two of the three debates would conflict with NFL f'ball games.

"I'll tell you what I don't like," Trump said. "It's against two NFL games. I got a letter from the NFL saying, 'This is ridiculous.'"

"I don't think we should be against the NFL," he went on. "I don't know how the dates are picked." Here's the part you will find astonishing: The NFL denied Sunday that they'd sent Trump any such letter:

Trump had earlier sent a tweet blaming Hillary Clinton for picking nights for debates that would interfere with f'ball games, because that's exactly the kind of monster she is:

Not that stupid dumb details would ever matter to Trump, but the actual debate schedules for the general election were set by the nonpartisan Commission on Presidential Debates (CPD), not Hillary Clinton, although Trump may think they work for the Clintons since everyone is out to get him and steal his magic bag. The Commission issued a statement Sunday explaining that they were not in the tank for Hillary against Trump, seeing as how the process of picking debate dates was in progress well before the party primaries were decided:

The Commission on Presidential Debates (CPD) started working more than 18 months ago to identify religious and federal holidays, baseball league playoff games, NFL games, and other events in order to select the best nights for the 2016 debates...It is impossible to avoid all sporting events, and there have been nights on which debates and games occurred in most election cycles. A debate has never been rescheduled as a result.

For what it's worth, the three presidential debate dates were announced in September 2015, while the NFL set its 2016 schedule in April. Damn, that Hillary and her minions are crafty.

The CPD made it clear the debates wouldn't be rescheduled, and also noted that presidential debates are a tad bit rarer than f'ball games, and even dared to hint they may be of greater import, although they avoided stating such a treasonous opinion openly:

As a point of reference, in a four-year period, there are four general election debates (three presidential and one vice presidential), and approximately 1,000 NFL games [...]

The CPD selects the debate dates a year in advance in order for the television networks to have maximum lead time and predictability in scheduling these extremely important civic education forums. The CPD believes the dates for the 2016 debates will serve the American public well.

Politico points out that this is hardly the first time presidential debates and f'ball games overlapped; in 2012, http://www.cnn.com/2012/10/03/sport/debate-big-games/ of the presidential debates had various sportsball games competing with them, and yet the Republic somehow managed to select a Chief Executive. The scheduling conflicts were among the few factors that Mitt Romney didn't blame his 2012 loss on, in fact.

Talking Points Memo editor Josh Marshall speculates Trump may open a second front in the debate avoidance strategy by insisting that it's unfair to only have him and Hillary Clinton debating, because after all it would be better to include the Green party's Jill Stein and Libertarian candidate Gary Johnson. Besides, fighting about debates -- and then petulantly walking away -- would be far more to his advantage:

Characterologically, Trump needs tension and drama. Fresh out of the conventions, he now needs to create a drama out of the debates. Like a bad seed kid, he can't help picking fights. He needs tension both to satisfy inner needs and to deal with other people. But even if he eventually agrees to participate in one or more of the debates, he will try mightily to force some change or break some dishes in order to assert dominance over the process. He'll insist someone needs to be included, some part of the format has to change, some location isn't sufficient. The substance will always be secondary to the need to impose his will. His initial volley making the non-sensical claim that Hillary Clinton scheduled the debates during football games is just the beginning.

Besides, how can he possibly participate in a debate when the IRS won't let him release his income taxes?