Donald Trump's Lawyers Wrote A Letter About All His Russian Money, And It Is ADORABLE 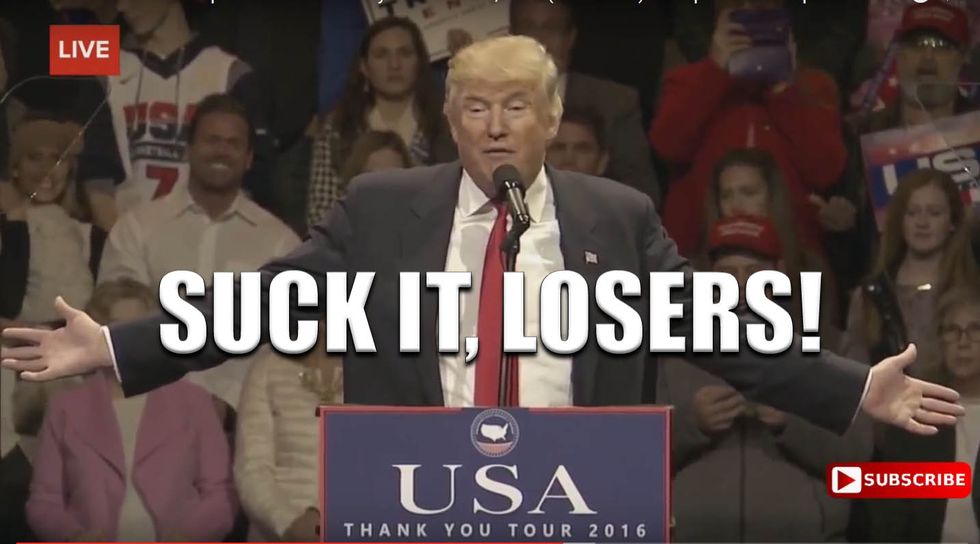 GUYS, breaking news, because the Trump-Russia investigation is SO OVER BRO, and you know why? Because Donald Trump's very honest and kind lawyers have written a letter! A certified letter! Dated March 8! And it says that, except for all the money Donald Trump has made from Russians, he hasn't made any money from Russians, and he definitely does NOT owe the Russians any money. QED! It is just a very good letter. Let's read it, and reflect on how very wrong we have all been, thinking Donald Trump might somehow be compromised financially by Russia, when we can see from this VERY GOOD CERTIFIED LETTER that he hasn't made any money from the Russians, except for when he has.

Are you not blown away by the utter goodness and honesty of that letter? We are!

If you cannot read it on your Obamaphone, let us summarize it hilariously:

Sheri and William have been Donald Trump's lawyers for like so long. They have pussgrab 'n' chilled so many times at Mar-a-Lago they literally can't even. The "Sheri" one is the same lady who stood in front of a giant stack of blank paper at that Trump press conference and "proved" Trump had divested from all his companies. What a total Sheri!

Sheri and William have Trump's tax returns in their hands and they are looking at them right now, but you cannot see them, because you need to go take a hike. Sheri and William have looked at Trump's tax returns for the last 10 years, and they have not found any Russian income, except for these tens of millions of dollars of Russian income, from the Miss Universe pageant, and also one time Trump bought a li'l cottage in Florida for $41 million moneys, and then he sold it to a Russian oligarch for $95 million moneys.

Also some Russians have bought some Trump condos, but how is that even income? PFFFFFT. It's not like they've spent a hundred million dollars on Trump condos, oh wait they have. Sheri and William, who are both tremendous, have also pored through Trump's tax returns to see if he owes money to anybody named Boris or Vladimir, and the answer is nyet. It's just a bunch of blind LLCs registered in the Caymans and banks registered in Cyprus, ALLEGEDLY, and that means it's not Russian. Do you even know where Russia is? It is not in the Cayman Islands or in Cyprus, you silly dildo-wit! You are bad at geography. Sheri and William have a globe right here, if you'd like to spin it around a few times and learn how to be smart like Sheri and William.

Sheri and William, who are the best lawyers, also assume an occasional Russian has enjoyed the culinary delicacy known as the "Trump steak." Yum yum eat 'em up!

Did we mention that this is a CERTIFIED LETTER?

The Daily Kos's David Waldman has been LOL-tweeting about this since it came out, making salient points about how Donald Trump's sons have very clearly said on multiple occasions that the bulk of the Trump Organization's money has come from Russia, how Russian mobsters are most likely behind a lot of those LLCs, and other sexxxy stuff like that. Here is a sample:

You should read all of Waldman's Twitter today because he is smart, like a common Sheri and William.

Wonkette will now go cower in shame somewhere on account of how foolish we were to think Donald Trump had weird Russian financial ties. This is Wonkette right now: DOY DOY DOY DOY DOY.

In conclusion, we are A Idiot and should really get a brain, MORANS.