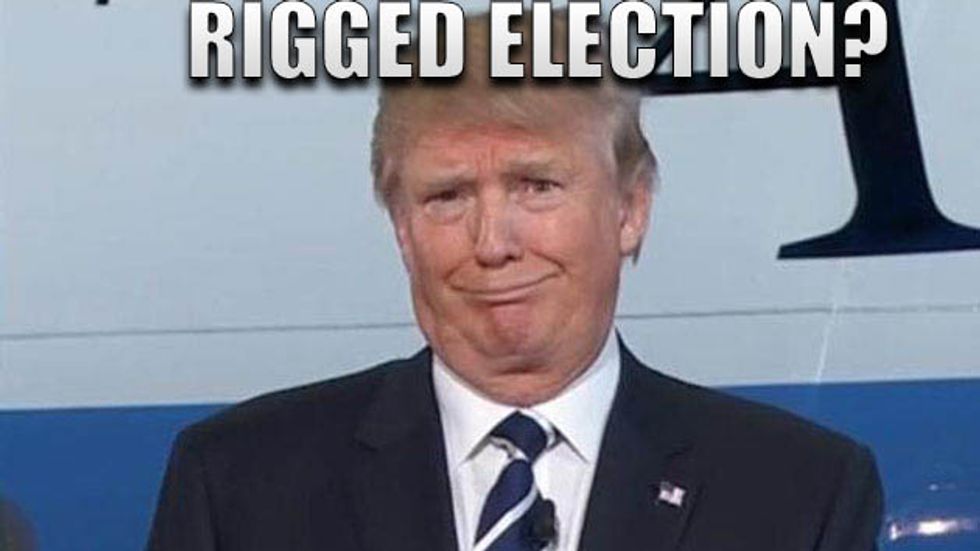 he says it is, so we should believe him

This post is not about recounts, except for when it is! We would like to update you on some numbers from the original tally, as results are finalized in Pennsylvania, Wisconsin and Michigan. SPECIFICALLY, we want to show you what happened Thursday in Pennsylvania, to give you an idea of just how yooooooge and impressive Donald Trump's little flaccid "win" is these days. Pennsylvania is almost done with its original count, and here is how few votes Donald Trump is beating Hillary Clinton by there:

46,948 votes. YOOOGE. If you add that to the truly massive 22,177 votes Trump beat Hillary by in Wisconsin, and the 10,704 majestically stupid people who put him over the top in Michigan, we are talking about 79,829 people in those three states, who damned their souls for all eternity by sending an autocratic know-nothing puss-burglar to the White House.

Of course, this is all happening as Hillary Clinton's popular vote total has now surpassed 2.5 million. To get an idea of how big that number is, you could NOT put all those people in one football stadium, and you could not shoot them into space, because they would be very heavy. To get another idea of how big that is, it's almost the population of the city of Chicago.

[wonkbar]<a href="http://wonkette.com/608984/cnn-lady-alisyn-camerota-cannot-even-handle-how-dumb-trump-supporters-are"></a>[/wonkbar]This is why Donald Trump has been tweet-bating himself raw about how THREE MILLION ILLEGALS ILLEGALLY VOTED IN CALIFORNIA! Hell, it's not fucking true, but it helps to distract his fragile ego from the true fact that most Americans fucking hate him, and his dumbest supporters believe it, so mission accomplished we guess.

Anyway, the point is that Donald Trump has the longest, thickest, most tumescent mandate to govern of any incoming president in all of American history.

As for the recounts -- which the New York Times is calling the "longest of long shots" -- Wisconsin has already begun, and it will be very interesting to see what they find! In Michigan, the dickhead Republican attorney general, Bill Schuette, has filed to stop the recounts because -- get this -- it "threatens to silence all Michigan votes for president," because as we all know, counting votes very carefully and making sure everybody's voice is really heard is the quickest way to murder democracy in its crib.

As for Pennsylvania, the Trump campaign has filed to stop a recount there, and not much is happening there yet, but who knows? Maybe it will happen! Maybe they will find a bunch of Russian hacking or good old-fashioned Republican dirty tricks, or maybe they won't and Trump will become president and America will die a fiery death.

Either way, it's just so exciting to be an American right now!