Don't Worry Folks, Calling A Black Man A _____ After You Kill Him Is Not A Crime 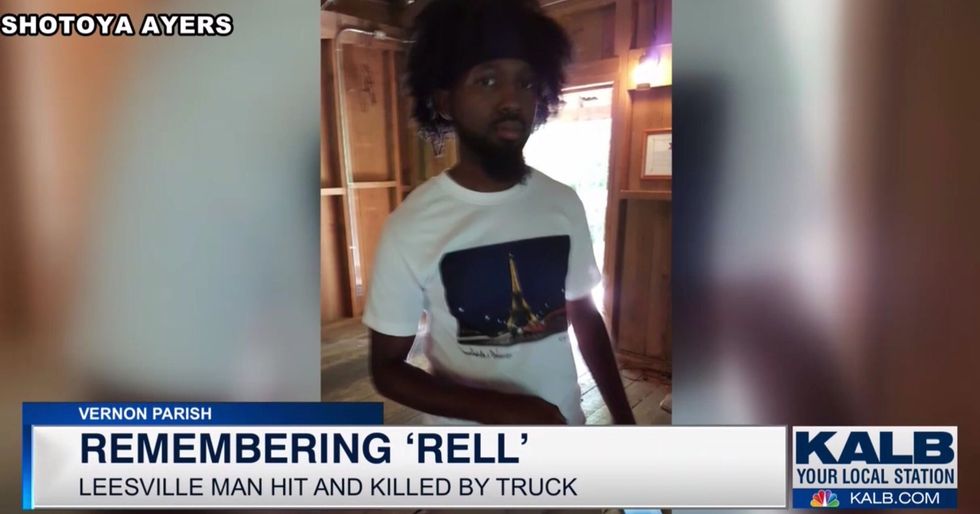 This is a human being

Well, it’s that time again!! Time for another episode of “Black Man Killed While _____.” And like so many of our other episodes of Ambien- (not really) related outbursts of pure racism, this time the racism is definitely not the cause of death. It’s just another side issue that the police are sure had nothing to do with anything at all. Because apparently, bragging on social media about how you killed “some nigg*r” with your truck and being more concerned about the damage to your truck is perfectly normal behavior. I mean, it’s not like blacks are actually people, if you ask certain “very fine people,” we are simply “apes” or “nig**rs,” you know, disposable and not quite human. So, fire up your Tiki Torches and get ready for more racism.

Sherell Lewis Jr, age 31, of Leesville, was cleaning up debris along a stretch of highway in Vernon parish, Louisiana, when he was struck by motorist Matthew Martin on May 29 -- just a few days ago. It was his birthday, and his family is devastated to be planning a funeral rather than attending a birthday party. Officials reported that he had parked his vehicle and was cleaning up trash and other debris along the road in order to prevent drivers from having an accident of their own. In other words; Lewis was being a good citizen. Unfortunately for Lewis his good deed turned out to be his final act.

Matthew Martin, 18, was driving along highway 171 in the Billy Goat area of Vernon Parish when his vehicle struck Lewis. Lewis died en route to the hospital from his injuries. This might have ended up being just another sad accident but for one thing. Social media. Martin, apparently a user of Instagram and a completely racist idiot, decided to discuss this incident on that social media app. In his posting he was asked who he hit, and this was his response:

31 year old Black man who was hit by a pickup truck and killed while being a Good Samaritan for trying to remove dangerous debris from the road.

His death was devastating.

What the Trump supporter who killed him said on Snapchat is as appalling as it gets... pic.twitter.com/K8Rfb5QZyu

Oh, look how upset he is over having to replace his poor, abused windshield! How utterly devastating that must be for him and his family. His vehicle got more of his concern than the man he just killed did. Deplorable.

It is quite disturbing to see the ease with which so many people in America have decided to let their racism flag fly high, without regard to how harmful their attitudes are to the fabric of our nation. And for those who held out hope that the youth of America would grow up to be unabashed color-blind lovers of diversity, let me remind you, Martin was 18. Our kids are not less racist than we are. Apparently, like at any other time in history, the children of America learn from the adults, and we are obviously teaching them to be both blatant and casual racists. And to brag about it on social media. Which is absolutely unremarkable in the year 2018 when even our own president cannot stop saying stupid shit on Twitter.

Martin did express the sentiment that he “felt bad for the family,” but his attitude raises the question, did Martin’s racial views have any impact on this accident? Was this somehow intentional, or simply a case of a racist accidentally killing one of the targets of his racial hatred? Making the assumption that most people involved in a deadly accident usually don’t casually call the person they killed some form of dehumanizing slur, people are skeptical of his intentions.

This has caused a bit of a headache for the Louisiana State Police who are investigating the accident, who say that although the messages were morally wrong, there was no “criminal intent” on the part of Matthew Martin. Because, of course not. It's amazing how many racists kill black people with no criminal intent. Happens all the time.

Sheriff Sam Craft of the Vernon Parish sheriff's office released a statement in response to questions about the social media posts:

I am appalled at the content of the social media messages that were posted after the incident. This post is unacceptable and has no place in our society. The inflammatory words that were used were morally wrong. I have the utmost confidence in the Louisiana State Police and their ability to thoroughly investigate this incident. I encourage any citizen who has information regarding the accident to contact the Louisiana State Police – Troop E, Alexandria, La. (318) 487-5911

So, ok, it might just be a coincidence that a racist happened along the road and somehow struck a black man, killed him, and then bragged about killing a nig**r on Instagram. Maybe. Also, maybe the young racist might have been a bit more careful if Sherell Lewis had been white, and might not have written posts on social media bragging about it. Because you know what type of killer brags about their killings on social media? Stupid ones who are very proud of what they just did. And people out there still think we're making it up. You have to work real hard to still believe that, but our fellow Americans are showing us just how hard-working they are.

Don't forget to donate today and help us keep shining a light in the darkness.