Dr. Ronny Jackson Demoted, Will Have To Lie About Other White House Staffers' Weight Now 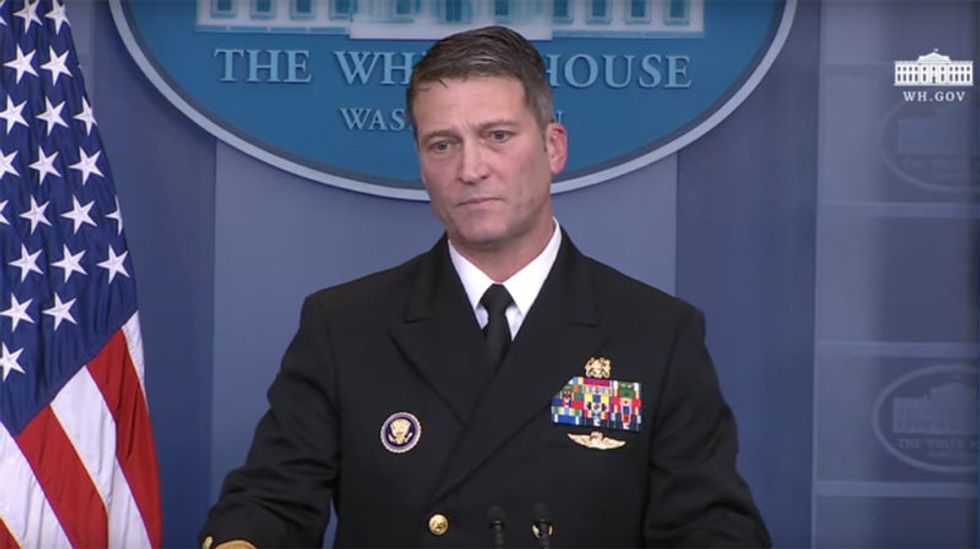 I have an important announcement about Sarah Huckebee Sanders's bunions...

Many sad tears today for Dr. Ronny Jackson, who won't be Donald Trump's personal physician anymore after withdrawing from consideration as secretary of the Department of Veterans Affairs. The job of personally doctoring the "president" will now be done by Sean Conley, the Navy doctor who took over that unpleasantness last month so Jackson could work full time on learning euphemisms for "privatizing the VA." While the New York Times reported it was "unclear" whether Jackson would retire from the Navy or continue on at the White House Medical Unit, the Washington Post cited an unnamed "White House official" who said Jackson would keep working in the Medical Unit, possibly remaining on call to remove Stephen Miller's head from his ass as needed.

Politico, which broke the story, said "two senior administration officials" had confirmed Jackson wouldn't be returning to his old job, but the article didn't have any insight into the decision-making that went into Jackson's fading into the background. Trump spent a fair chunk of the day Saturday defending Jackson and calling for Senator Jon Tester's head on a plastic McDonalds tray, but it doesn't look like he's fighting to keep Admiral Doc Ronny in his old job. Could be interesting to find out whether Trump was pushing for Jackson to stay in the job and had to be talked into accepting the move, or if he was happy to use Jackson's stepping away from the nomination as political ammunition against Tester, and nothing more. As of right now, we haven't seen any Trump tweets about what a shame it is that mean Democrats robbed him of his very favorite doctor. But Trump has bigger matters to deal with, like how the White House Correspondents Dinner is a threat to America and must be ended, possibly along with White House correspondents.

In other Jackson-related news, the Washington Post offered a new wrinkle on that Secret Service records search that supposedly exonerated Jackson after CNN reported that during an overseas trip in 2015, Jackson had drunkenly pounded on a female staffer's hotel door and yelled so loudly that Secret Service agents had to take him back to his own room lest he wake up Barack Obama. Friday, the Secret Service said a review of its records found no such incident in 2015. Trump took to Twitter to insist the Secret Service had conclusively disproved all the allegations against Jackson:

Secret Service has just informed me that Senator Jon Tester’s statements on Admiral Jackson are not true. There were no such findings. A horrible thing that we in D.C. must live with, just like phony Russian Collusion. Tester should lose race in Montana. Very dishonest and sick!

However, says WaPo, the Secret Service got the year wrong, as did CNN:

Even in the case of the CNN report, the Secret Service’s statement does not prove that the incident did not happen. According to one former employee of the White House Medical Unit, as well as a Democratic aide with knowledge of the allegations that Tester released, the CNN report, which claimed that the incident occurred in 2015, was incorrect; it occurred in 2014, they said. The Secret Service pronouncement specified only that records from 2015 showed no evidence of such an incident.

More allegations have trickled in since Thursday, when Jackson ended his bid to lead VA, and they are being referred to the inspector general’s office within the Defense Department, according to a Democratic aide.

We're surprised that hasn't gotten more press, but with Jackson no longer being considered for the VA, it's probably doomed to disappear in the usual news churn. Who reads corrections anyway?

Also too, be sure to check out WaPo's piece from Sunday evening on the sloppy vetting given to Trump nominees up and down the line, in which loyalty to Donald Trump is far more important than old-fashioned trivia like "qualifications for the job." It's one of those things we all know already, just like we know all sorts of hog noses go into hot dogs, but WaPo's details on the process -- if you use the word very loosely -- are nonetheless enlightening, like the revelation that before Jeff Sessions was allowed to name former Ted Cruz and Carly Fiorina flack Sarah Isgur Flores as his spokesperson, she first had to go to the Oval Office and sing the "I'm Very Very Sorry" song for Trump because she had criticized Trump during the primaries, as part of her job. It's yet another shocking but not surprising look at just how casually the Trump administration breaks norms and processes. Vetting? Why would anyone need to be vetted?

In any case, Dr. Jackson still has a job (maybe!), the Defense Department's inspector general is apparently continuing to look at the allegations made against him during his brief visit to the spotlight, and Donald Trump is still looking for a VA secretary who really, really loves him. And wants to do right by veterans, too, that would be a nice bonus, but not absolutely necessary.