Duck Dynasty Guy Has A Penis, Not A Girl-Thingy 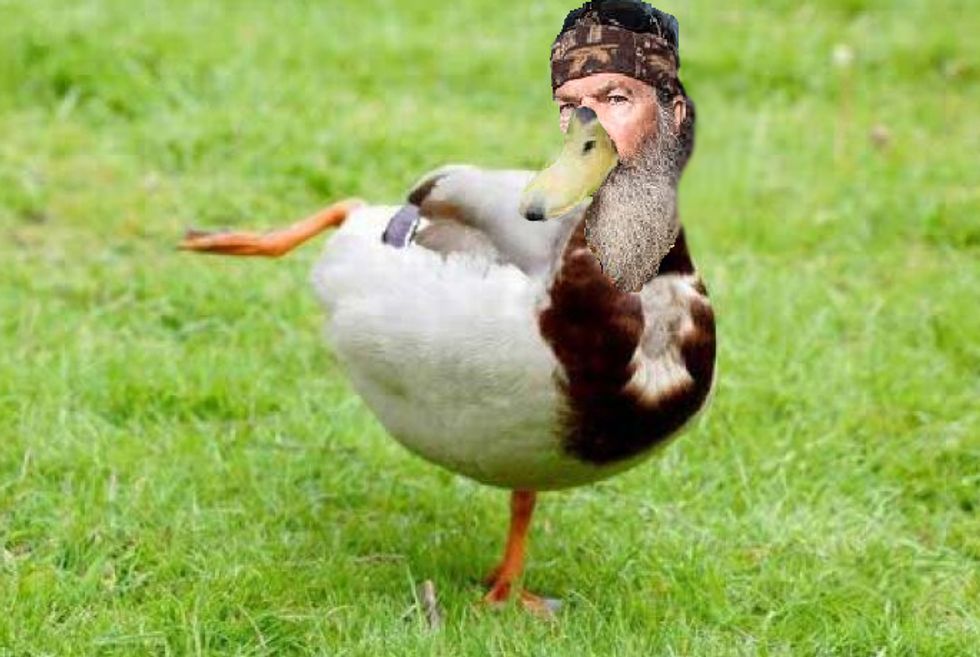 So in Houston Sunday night, a whole buncha supporters of traditional discrimination got together for a big ol' prayfest to pray away the gay rights and protest Houston's brand-new law prohibiting discrimination against LGBT people.

The event featured a veritable smorgasbord of rightwing heroes, like Mike Huckabee, Todd "Christians are Oppressed" Starnes, and Phil "Duck Calls For Jebus" Robertson. The rally was called to support several pastors who had been subpoenaed for their involvement in a petition drive to overturn the measure. Houston Mayor Annise parker recognized what a publicity nightmare that was, and withdrew the subpoenas, but the rally was scheduled anyway, so they held it to argue loudly that banning discrimination against gay people is actually a form of religious oppression against Christians, because of course it is. How's this for brave? Several attendees proudly wore t-shirts reading “We Reserve The Right To Refuse Service To Homosexuals.”

And like any civil rights rally, these brave souls vowed they would not bend to government tyranny, especially not the terrifying prospect of trans* people using public restrooms, which was one of the most prominent horrors that the anti-equality faction has warned of. As one pastor said in a video played at the Prayer-A-Palooza, those homeosexxicans and their "equality" are going to lead to "a grown man going into the restroom with a six-year-old girl, standing alongside of her, using the restroom," which we'll assume is mostly only going to be a problem in women's restrooms that have urinals.

Nonetheless, Phil Robertson made this solemn vow: "For all you ladies in Texas, trust me when I tell you this: when you're seated in your restroom, putting on your Maybelline, when I need to take a leak, I'm not going there." Thunderous applause!

Thank god for that! Say, did we mention the name of the no-men-peeing-with-ladies prayer rally? That would be "I Stand Sunday." Because only ladies and homos sit when they pee. That's in the Bible, you know.