Duggar BFF Bill Gothard Sorry For Doing Rapey Sex To All Those Ladies, On Their Feets 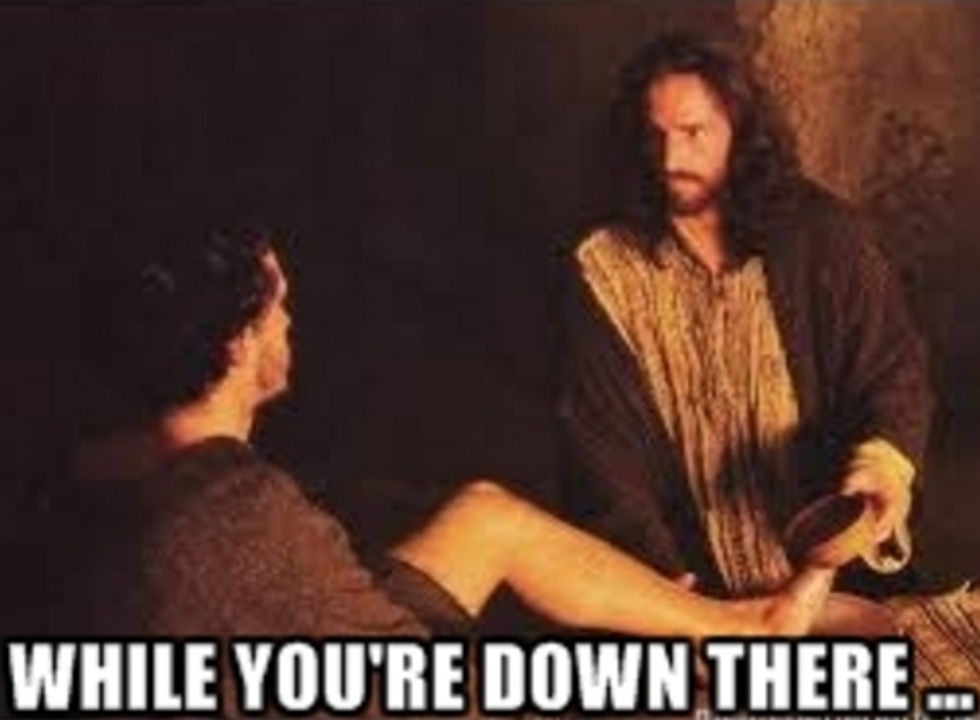 Going directly to hell for making this meme, do not pass go, BRB.

[contextly_sidebar id="8cnnDFQ7zmICCqiSJGZnulu4If6OACQp"]Last week, we told you that, in the shock of the century, creepy rightwinger homeschooling guru Bill Gothard, the man tasked with teaching young sibling diddlewanker Josh Duggar how to keep his hands out of his sisters' no-no spots, had been accused by 10 woman (officially, in a lawsuit) of sexually harassing, molesting, and in one case, raping them when they were in his "counseling" care at his Institute Of Basic Life Principles. At the time he said, "Oh no. Never never. Oh! That’s horrible. Never in my life have I touched a girl sexually. I’m shocked to even hear that," even though he totally has been accused of just that.

Now Gothard has a new explanation. He didn't sin with those ladies by hand or by penis, but he definitely did un-Christian foot spooge stuff with them. Father, hear his confession, which is about lady toe jam:

“I have realized how wrong and insensitive I was to only select certain types of young people, especially young women, to serve at Headquarters, often as my personal assistants,” he wrote in the odd mea culpa.

Uh huh, he only picked the young sexxxy ones, we kind of knew that, GET TO THE FOOT SEX:

“I was very wrong in holding hands, giving hugs and touching their hair or feet,” he said. “I was also wrong in making statements that caused emotional turmoil and confusion. My guilty is compounded by my hypocrisy of requiring standards for others but not following them myself. All of this can only be described as ungodly and sinful.”

What, like he didn't allow the girls to sex each other on the feet, but he was allowed all the foot boning he wanted? Woe to you, Bill Gothard, teacher of the Law and Pharisee, you hypocrite!

But remember, he said he didn't touch ANY girls sexually, when he first reacted to this lawsuit. So is he saying the foot stuff was non-sexual but still sinful somehow (which is in the Holy Bible WHERE PLEASE?), or is he saying he was foot-rubbing them with one hand and furiously jerking himself into fundamentalist Christian toe-gasms with the other?

[contextly_sidebar id="VP8H8DqGSuNOyWKlW4tcv8l5GSqrtSBT"]And if it WAS sexual (WE BET IT WAS!), is this part of his "sex ed" curriculum? We know it teaches that the spooge of a foreign man (like a stranger, not specifically an immigrant) puts the cancer into the vaginal temptress hole, and that if you do too much sin with your gina, you might have to have surgery to have the demons extracted. Common science-y stuff.

But does it also teach that when a man loves a barely legal "woman" very much, he rubs his dick between her toes, and then God brings them a baby? Because we looked it up on internets, and even if you are a dicksexual homolesbyterian, the penis does not actually go between the toes. (Unless you are into that sort of thing, not that there's anything wrong with that, OH GOD, WONKETTE, STOP KINK-SHAMING!)

[contextly_sidebar id="19pNt9Q7C86zxBI7kXyfBTXKtTOVizvb"]AND ANOTHER THING! As we all know, Jesus Of Nazareth (PBUH) taught that if you lust after a lady in your heart, it's just as bad as if you lusted after her with your dinglewhacker. Does that count for feets too? Like if you foot-fuck a lady IN YOUR HEART, do you have to beg Jesus for forgiveness? And does that mean Pope Nice-Nice is going to hell if he's ever gotten a Pope Bone-Bone while he was foot-washing a lady? Sorry, Wonkette's got #theologyquestions now, and we need answers.

Anyway, Gothard, that pervy troll, would like to make amends for rape-sexing all the lady toes, but not by HAHAHA paying restitution or anything, heck no. He just wants to say he's sorry to Jesus and promises never to do bad foot romance ever again:

Eschewing the legal process and the women’s request for at least $50,000 each in damages, Gothard requested individual meetings to discuss “forgiveness.”

“I can only humbly ask that each of you whom I damaged consider granting me the opportunity to confess my sins against you, and to ask you to forgive me,” he begged in the note.

HMMMM, wonder if his alleged victims would be interested in that option? No? Fuck Bill Gothard with a pumice stone covered in foot callouses and butt herpes? OK.