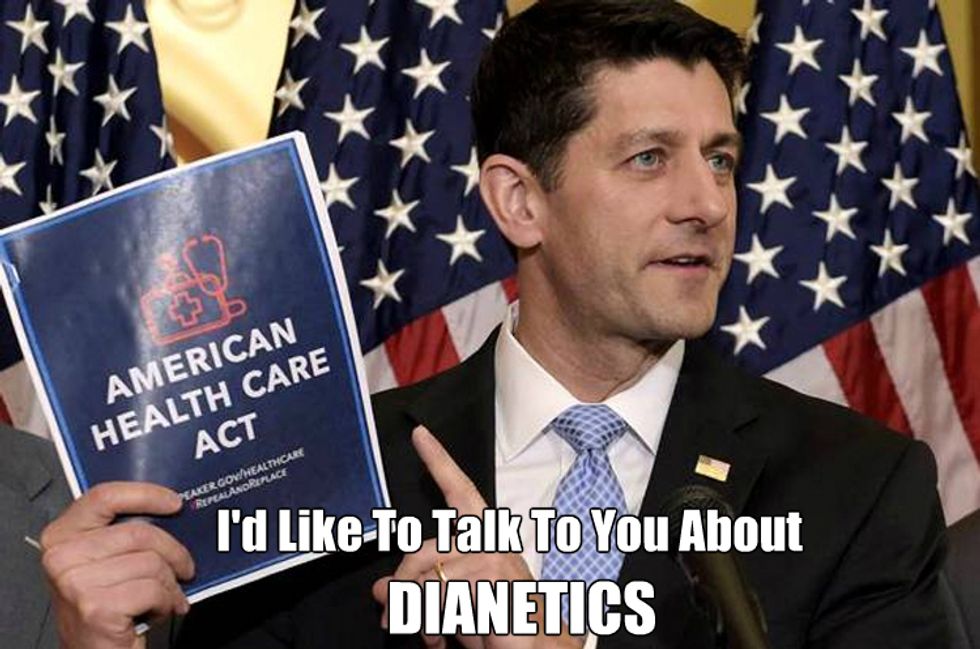 It's a lot less of a scam than this thing, for starters...

Dingleberry Paul Ryan now says his very own plan to kill off the Affordable Care Act (aka Obamacare, what, are you new here?) needs some fixing before it has even a chance of passing the House, and you just never mind that he had previously said it was such a finely crafted plan that tinkering with it would ruin it. Ryan and Vice President Mike Pence are finding ways to make the proposal more palatable to House conservatives, who think the Ryan plan is entirely too kind to poor people, without also scaring away moderates who would rather not be tarred and feathered (with votes) after taking away people's health coverage. That ought to be easy. All Ryan has to do is come up with a plan that completely eradicates Obamacare while not completely eradicating Obamacare.

After the Congressional Budget Office projected the plan would throw 24 million Americans off their insurance by 2026, with 14 million likely to drop insurance just in 2018, Ryan and Pence met with House Republicans to tell them the bill can be changed before it goes to a full House vote next week, though they were vague about what would change. One idea being floated to bring the hard right aboard phases out the ACA's expansion of Medicaid even faster than the current version does, but if that's included, the bill could lose more support among moderates, according to Indiana Rep. Luke Messer, who told Politico,

My perception is that changing that date would lose at least as many votes as it would gain [...] I think the current draft of the bill does a good job balancing the concerns … of creating a horizon upon which these changes can happen. To me, I think it’s best that that provision stay the way it is.

Another terrific idea to make the bill even tougher on poor people would be to allow governors to require Medicaid recipients -- if any are left -- to work for their benefits. The White House is apparently OK with that one.

House Teabaggers Want To Murder All Of Obamacare RIGHT NOW, Or Die Tryin'!

Extremism in the defense of kicking people off insurance for pre-existing conditions is probably a vice, really.

The super-teabaggy House Freedom Caucus, on the other hand, wants nothing short of a full repeal of the ACA, with any new health policies to be enacted later, if at all. The House Budget Committee voted this morning to move the bill along, passing it by just 19 to 17, with all three of the Freedom Caulkers on the budget committee voting against it.

So far, the proposed changes to the bill are all over the place, with rightwing House members pushing for an earlier end to Medicaid expansion and to weaken even further the types of coverage insurance must provide (plus that work requirement) and moderates calling for kinder gentler tax credits that would give seniors more help in purchasing private health insurance. So it's looking like whatever changes are made are likely to lose votes with one side or the other, and that's just in the House. Even if a bill that makes House hardliners happy can pass, the meaner the House version gets, the less chance the bill has in the Senate, where, Vox reports, 12 Republicans have objected to the bill in its current form; for the bill to pass in the Senate, no more than two Republicans can vote against it.

Even so, Paul Ryan is still reportedly acting thrilled that he'll be able to get some version of his dumb crappy bill passed, says Politico:

Appearing at the full GOP conference meeting Wednesday night, Pence tried to rally all Republicans to get excited about repealing the health care law — despite the clear challenges ahead. He opened the conference by holding up his pointer finger and his thumb one inch apart and declaring: “We are this close to history!”

Say...you know who else was just this close to making history?

Yr Wonkett has gone ad-free, which means we rely on the generous support of readers now. Hit the donations clicky thing below this article to help us keep you up to date on Schrödinger's ACA repeal.