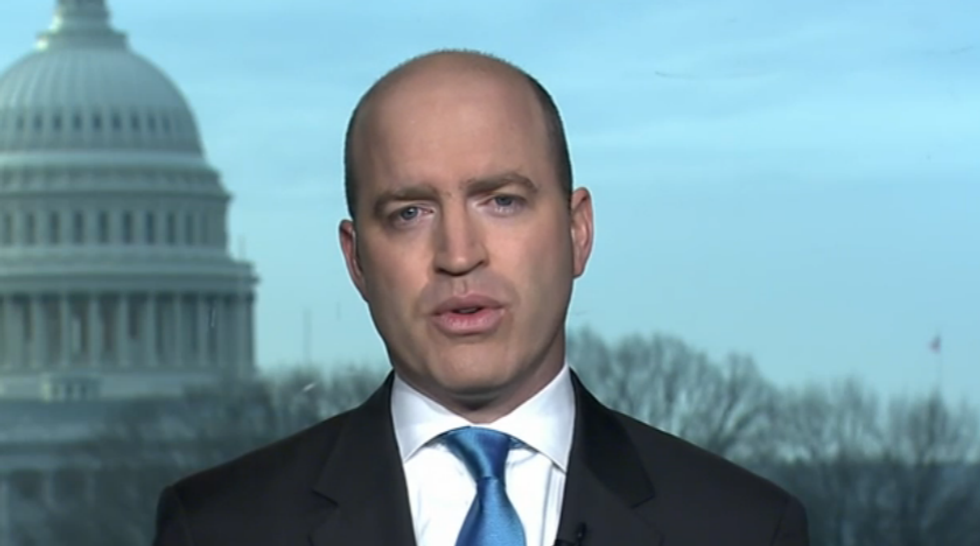 Jeff Mason, head of the WHCA, whom we hope will NOT be a lapdog for the Trump regime.

The White House Correspondents' Association (WHCA): Is it a big dumbface who fell off a turnip truck yesterday? People are wondering! After the little stunt White House Press Secretary Sean Spicer pulled Friday, canceling the daily press briefing in favor with a much smaller "gaggle" in his office, with mostly just "friendly" "journalists" invited, the WHCA issued a pissed-off statement and said it'd be having a little conversation with the Trump White House.

Then, Saturday, Trump tweeted that he wouldn't be going to the annual White House Correspondents' Dinner, either because he's having his grundle power-washed that day or because he's a giant coward scared of mean comedians or journalists (his ENEMY) making fun of him.

So when Jeff Mason, head of the WHCA, went on "Morning Joe" to talk about stuff and things, he issued a VERY HARD LINE against the Trump regime's threats against the First Amendment, and he called him a pussy for skipping Nerd Prom, right? RIGHT?

MASON: The Correspondents’ Association has worked very hard this year to build a constructive relationship with the Trump White House. And I think in many ways we have succeeded. And we would have liked to have showcased that at the dinner. That doesn’t mean — this comes in the context of very, very negative rhetoric coming from the president of the United States. But it’s important, I think, for viewers to know that despite that rhetoric, we have worked well with the Trump White House. We have had many opportunities for journalists to ask questions of the president, and of his press team. And those things count, and those things are also things we would have and will celebrate at this dinner.

MIKA BRZEZINSKI: So,your reaction to the president saying he is not going?

MASON: Well, I was surprised. I was surprised that we hadn’t had a chance to even really talk about it, except in passing a couple times over the last month. You know, we have been focusing on a lot of major challenges between the press and the White House and the dinner is, you know, not been at the top of our list for that.

MASON: But we are planning that dinner. We are working very hard, and we are going to have that dinner. And if the president changes his mind, he is still welcome.

OK, hold up. We sort of understand them re-extending the invitation to Trump, because hey, every day is a good day for Trump to change his mind and NOT act like a giant pussy who wants to be the world's next tinpot dictator, not that that's ever gonna happen. And we are glad they're still having the dinner! We think they should invite Alec Baldwin and the rest of the "SNL" crew, and let them sit in the president's place of honor. It would be a very good night for free speech! But, as Tommy Christopher asks at ShareBlue, why are we praising the Trump White House for letting journalists ask questions? THAT IS WHAT THEY ARE SUPPOSED TO DO.

Later in the interview, discussing Spicer's petulant behavior on Friday, Mason noted that Spicer has actually done LOTS of briefings, as if he deserves a cookie for that. We would point out to Mr. Mason that in those briefings, Spicer tends to give the most questions to "journalists" from Dead Breitbart and the like, who often ask questions so hard-hitting they might as well be, "Is Donald Trump the BEST PRESIDENT EVER, or would you call him THE BEST EVER AND ALSO VERY SEXUALLY AROUSING?" Spicer doesn't have the stones to take hard questions about his boss, especially since he knows his boss is watching on the television.

Mason did allow, to his credit, that if Spicer tried that "gaggle" funny business again, then "we’ll have to talk about it with our members about how to proceed," which is good, we guess, but still really milquetoast.

So what gives? Does the WHCA actually think they can butter up the "president" to the point they finally establish a real, productive relationship between him and the press? Are we trying to catch flies with honey here? If so, that's nice, we guess, except for how it's not going to work. Any "president" who declares the free press to be the literal enemy of the American people does not deserve to be treated with the deference usually reserved for American presidents. Those are not the words of a president (of EITHER party) who loves America and wants to defend the Constitution. They are the words of a wanna-be tyrant.

By the way, did you all hear about the Washington Post's new motto? "Democracy Dies In Darkness"? That is the motto of a journalistic entity that understands the current threat our republic faces. The WHCA's motto, on the other hand, which currently seems to be, "Maybe if we roll over again and wag our tail real cute-like, the president will scratch our belly this time, instead of kicking our tiny puppy body," sucks a bag of dicks.

Know what Wonkette needs? We need YOU, because we are fully reader-supported! Please to give us a few bucks if you liked this post!