Dumb Kentucky 'Noah's Ark' Lit Up In Rainbows For Christmas, To Stick It To The Queers 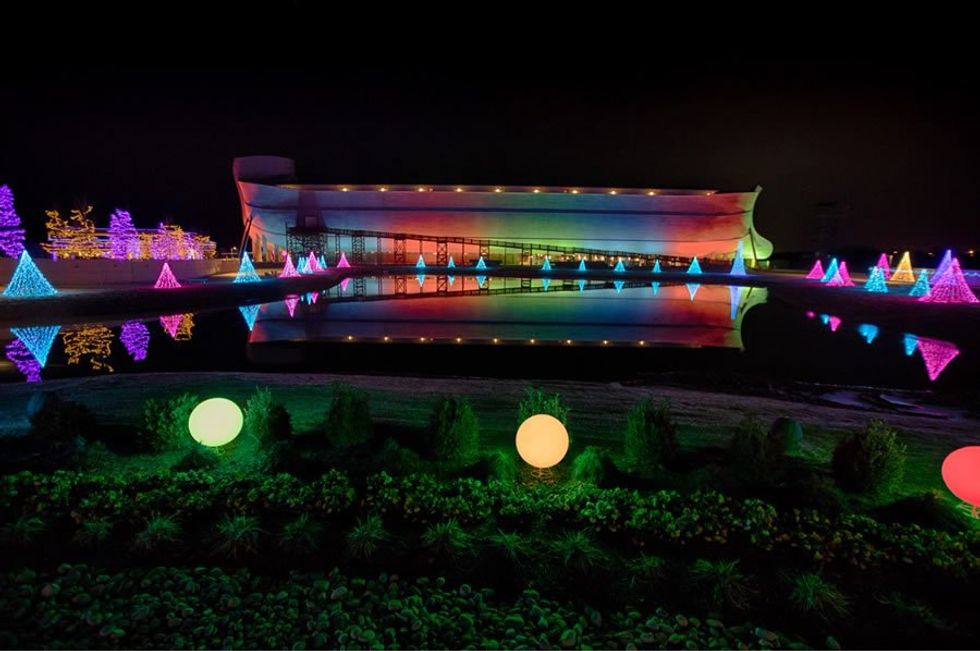 It's been a while since we've talked about that idiot creationist Ken Ham and his dumb Noah's Ark Bible theme park, where you get to learn, based on the totally valid precepts of Creation Science, about that time God murdered everybody with a flood, except He saved his bro Noah and his family from water death by instructing him to build a BIG BOAT, with room enough for a gentleman and lady version of all the animals on earth, so those furry woodland creatures (and dinosaurs!) could animalistically bang each other pregnant for 40 days and 40 nights, and thus repopulate the earth. Presumably the dinosaurs banged each other TO DEATH, which is why they got extincted.

If you will remember from Sunday School, the end of the story is that God made the First Rainbow Ever, as a "symbol" that His Almighty-ness wasn't particularly sorry for murdering everybody, INCLUDING BABIES AND UNBORN BABIES (GOD DID ABORTION!), but that He will never ever do it again, He promises, at least not with water. All the other weapons are still on the table. "Sorry about your dead BFFs, but here's something colorful."

And that is why, as the Friendly Atheist reports, Ken Ham's idiot theme park is lit up in rainbows right now. The other reason is that Ham is all pissed off about how queers stoled the rainbow from Noah and Old Testament God, so he is stickin' it to the homosexuals with this act of multi-colored illumination.

Our special Christmas event at the Ark Encounter ...

Ham reminds everybody of God's Special Pinky Swear with Noah about no more wet murder, and continues:

The sign of this covenant was the rainbow. Even today the rainbow represents the “everlasting covenant between God and every living creature of all flesh that is on the earth” (Genesis 9:16).

The rainbow stands as a poignant reminder that God keeps His promises. Despite the wickedness in the world, God has not sent another global Flood to destroy all flesh.

That's mighty big of Him.

One two, skip a few, let's get to the God Hates Fags part:

In recent times the rainbow (albeit with some different colors) has come to represent something far different. To many people it means freedom, love, pride, a new era, and, specifically, the LGBTQ movement. Indeed when the US Supreme Court legalized gay “marriage” last year, the White House was lit up in rainbow colors ... [...]

But the rainbow itself wasn’t designed to be a symbol of freedom, love, pride, or the LGBTQ movement. God created this beautiful, colorful phenomenon and designated it as a sign of His covenant with Noah and his descendants forever.

Sadly, people ignore what God intended the rainbow to represent and proudly wave rainbow-colored flags in defiance of God’s command and design for marriage. Because of this, many Christians shy away from using the rainbow colors. But the rainbow was a symbol of God’s promises before the LGBTQ movement—and will continue to be after that movement has ended. As Christians, we need to take the rainbow back and teach our young people its true meaning.

Don't use the pretty colors as a symbol of love! They only represent the following things:

Doesn't that put YOU in the Christmas spirit? Peace on earth, good will to men, and VERY LITTLE GETTING MURDERED BY GOD.

Ham closes by reminding everyone that God actually IS going to come back and murder heathens at some point in the future, but this time He will do it with fire instead of water, which means He technically won't be breaking His contract with humanity, ANYWAY MERRY CHRISTMAS, HOPE SANTA GIVES YOU EVERYTHING YOU WANT THIS YEAR!