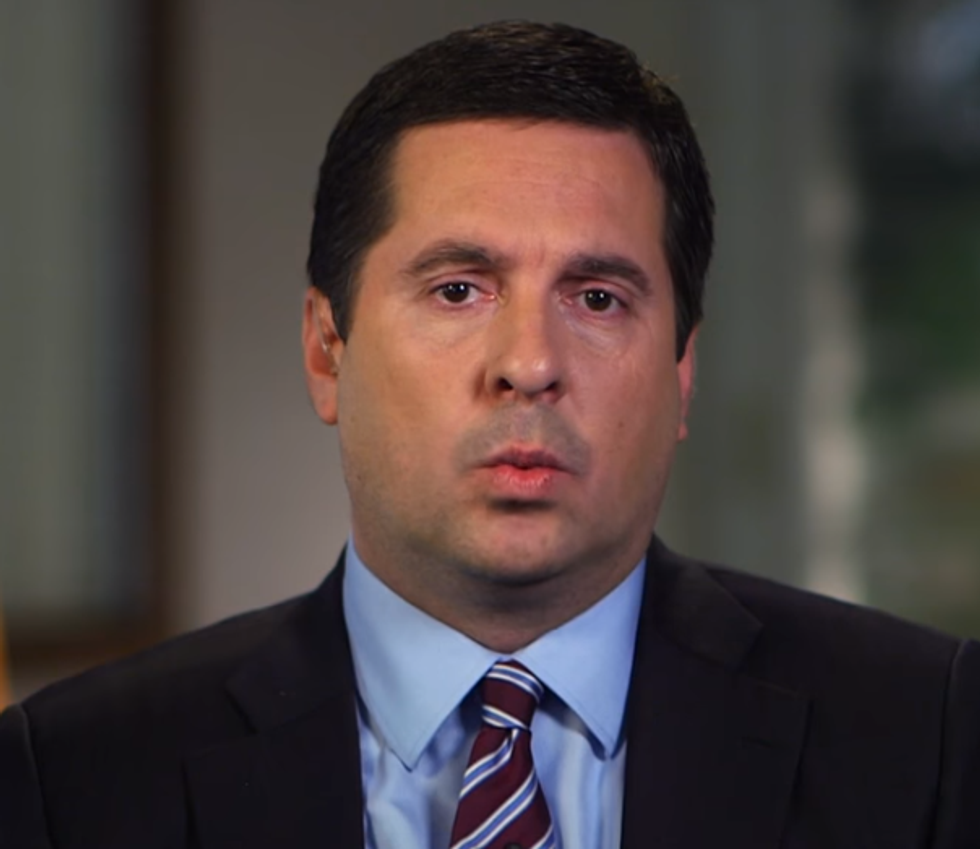 BIG DEVIN NUNES NEWS for your Monday morning! Because that is how America is now, that a pissant congressman from California can hijack the news cycle by threatening to leak a memo his office wrote, based on classified information he hasn't actually seen, in order to protect his pissant stable genius president, who is probably guilty of many crimes. And now we're learning what's inside that memo and OOH IT IS SOME BAD STUFF, like GO TO JAIL.

Of course, it doesn't make the Justice Department look bad. It makes Donald Trump look bad. GOOD GOING, DEVIN! What was that thing Frank Bruni's source said about how Nunes's brain isn't the freshest lunch meat in the refrigerator, as the old expression goes?

The renewal shows that the Justice Department under President Trump saw reason to believe that the associate, Carter Page, was acting as a Russian agent. But the reference to Mr. Rosenstein’s actions in the memo — a much-disputed document that paints the investigation into Russian election meddling as tainted from the start — indicates that Republicans may be moving to seize on his role as they seek to undermine the inquiry.

Devin Nunes's insinuation here is that the FBI used the DODGY DOSSIER (you know, the dossier that is literally trying to kill Carter Page!) as its only evidence before the FISA court, and that the FISA court approved the application only based on the DODGY DOSSIER. That would be weird, since the FBI has been watching Carter Page as a possible Russian agent forfuckingever.

Former DOJ spox/MSNBC analyist Matt Miller cuts through the horse poopy to get to the point of Devin's Big Reveal:

Yes, Miller is talking about Rod Rosenstein, the DEEP STATE DUMBO-CRAP from Baltimore, who is in fact a Republican and a Trump appointee and ... mmhmm, yep!

But for real, Devin Nunes, good job exposing that information! We sure do believe the Russia investigation is a total "hoax" now, thanks to you!

So will they #ReleaseTheMemo? Probably. The Justice Department's position continues to be "FUCK U DEVIN," but last week Trump sent John Kelly to tell Jeff Sessions (who is supposed to be RECUSED, that asshole) the White House wants Devin Nunes's little memo, which Democratic House Intel Committee ranking member Adam Schiff has called "talking points," given over to the public. Trump supports the release because ... get this ... he is for transparency.

Meanwhile, the House Intel Committee is gearing up to use an obscure provision to release it, maybe as soon as this afternoon, at which point Trump would have five days to say "No memo! No memo! You are the memo!" Of course, Trump doesn't want to do that, so this would make the White House and Justice have an even bigger fight than they already are having.

So all of that is fun!