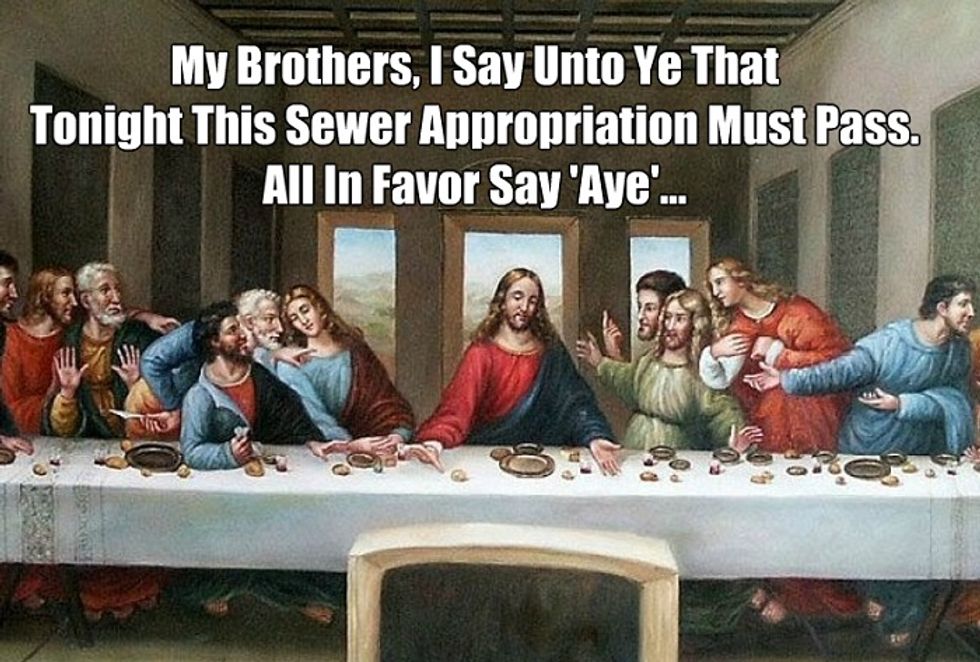 In a court decision that surely must mean the end of Christianity forever, once again, a federal court ruled Friday that a Virginia county board of supervisors can't start its meetings with explicitly Christian prayers. You astute Wonketteers who are in the know may find yourselves scratching your heads and saying, "But wait, didn't the Supremes just rule last year that it was hunky-dory-mary-joseph-jebus for some town in New York to start its meetings with a double helping of Jesus-invoking and a side of Amen? And you would be right!

But the Jesusy members of the Pittsylvania Board of Supervisors took a step that the folks in Greece, New York, did not: In Greece, the town council let members of the public give the invocations, and by some coincidence, every single meeting, it happened to be Christian after Christian who volunteered to say the opening prayer. As long as other faiths could theoretically invoke the Sky Friend of their choosing, on paper if not in actual practice, there was still no violation of the Establishment clause (and yes, we do think that's a load of weasel spleens, but it was the 5-4 ruling). In the Virginia case, the board members led the prayers themselves, and treated the start of the meetings like a church service. Or even more like a church service, according to the ACLU of Virginia's statement on the decision, because it was the board members themselves doing the praying, presumably so no sneaky Muslims would come in and get Mohammed all over the nice clean board chambers.

So now we know where the line is: private citizens who are all Christians giving Christian invocations, to the exclusion of everyone else (except on paper) is fine, but actual government officials leading their own Christian invocations, NOT COOL. That's either a narrow win for religious freedom, or, as we'll no doubt hear from the usual corners of the internet, an unspeakable burden on decent Christian lawmakers who just want to put their faith into action during the opening minutes of county supervisor meetings, which Christ designated as His special "Me Time" (Expectorations 7:2-5).

Also, too, the county forgot to file its appeal on time, so it can't appeal now, neener-neener-neener, and it has to pay the ACLU of Virginia's legal fees of $74,091.46. Render unto Caesar, you twits. Now, let's see about balancing things out by making church services follow Robert's Rules of Order.