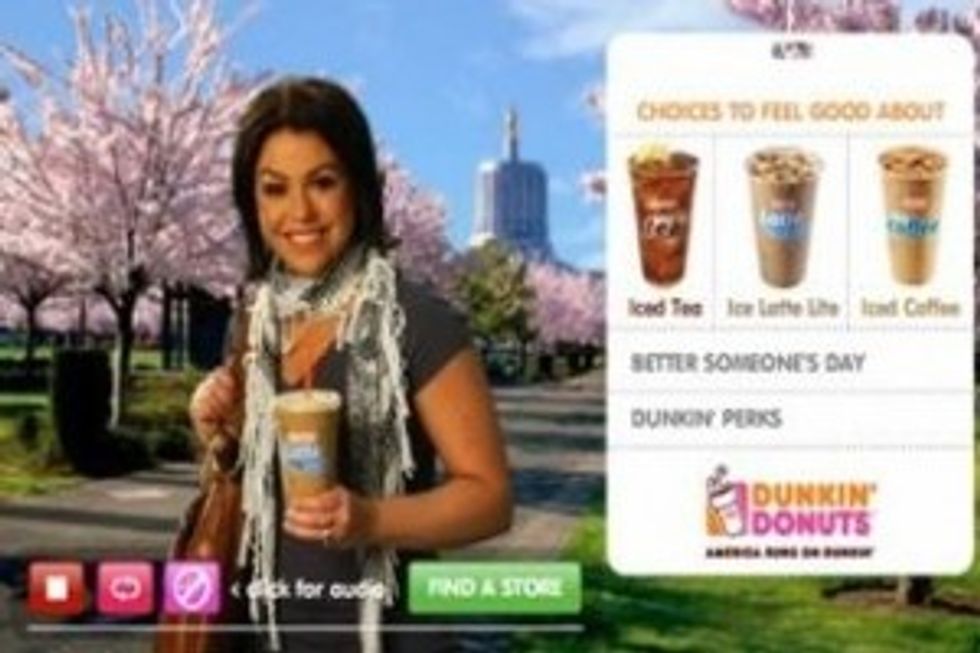 We've been keeping an eye on the Economic Newz, because sometimes you can "tell things" from the business reports that the political scumsacks won't admit until it's already common knowledge ("Unemployment continues to be a challenge," etc.), and so far it looks like investors are all "Meh" on the debt ceiling/American Default stuff because the World Economy and all of America's Rich People have already "decoupled" from the festering diabetes sore that is the U.S. Economy. But, there are other Telling Things on the Bloomberg Terminal. For example: Despite the crashing, crushing national economy, lard merchant Dunkin' Donuts is having ahot Initial Public Offering of its stoxx today! People still got some couch change for the cream-syrup-filled grease goblins ... until next week, anyways. Also: Although 43% of WalMart's sad ladies are sexually not getting sexted by their "old man" or whatever, probably because he is an incredibly gross, racist, violent alcoholic who poops in his knockoff Laz-E-Boy while watching old DVDs of Lou Dobbs, a company that marketed some kind of horny-makin' cream for WalMart actually went bankrupt, because in most instances, sex is pretty gross -- especially when you feel obligated to have it with that repugnant odor troll who lives in your trailer and won't hurry up and die already.

In 2004, Zestra Laboratories started making an over-the-counter female arousal ointment that it sold in hundreds of Wal-Mart (WMT) stores across the country. Notwithstanding a seemingly immense market of women who experience sexual difficulties -- 43 percent in the U.S., according to an influential University of Chicago study published in the “Journal of the American Medical Association” in 1999 -- the privately held North Charleston, S.C., business filed for bankruptcy in 2008.

Wow, sad face. But is there something other than the fact that most American WalMart shopper ladies would rather have sexytime with the demons of Twilight or the long-haired musclemen of the popular romance novels -- the biggest sellers in WalMart's book aisle, after the Holy Bible -- than with the red-faced cretin simultaneously listening to Rush Limbaugh and Fox and Friends while pouring the last of the Pringles crumbs directly from the tube into his mouth-hole?

Since relaunching Zestra in September 2009, Scherl says the product’s biggest stumbling block has been getting its ads on TV. Only 24 of the 136 stations that responded to her submissions approved them in full, according to Scherl. (Fifty- nine stations denied them outright; 53 approved them with significant restrictions). She says the Big Three networks’ decisions not to run her ads are representative of her struggle. Shows have also passed on running Zestra ads, including TMZ, the celebrity news show owned by Warner Bros. (TWX). Scott Rowe, a Warner Bros. spokesperson, declined to give specifics, saying TMZ “[adheres] to broadcast guidelines for advertiser content" ....

Scherl believes the networks maintain a double standard for products related to female sexuality. “I asked the standards- and-practices folks at the networks and cable stations to explain their concerns. I said: ‘You’re talking about four-hour erections on “The Super Bowl.” I don’t want my ads on during “The Super Bowl.”’ I’m fine with standards, I just want them to be equally applied.” Semprae edited its ads, removing references to sex, sexuality, and arousal.

Wow, so TMZ has standards now? Good to know! We guess if you mistakenly tuned into the TMZ television show and it's not grainy spy-camera video of the Kardashian sisters sucking off a football player, you'll know it's a commercial break.

So what does work in American business, today? Dunkin' Donuts. For about six dollars, you can get two or three days' worth of caloric intake at a Dunkin' Donuts, especially if you come at Breakfast Time (which we think might also be "all the time"). The Dunkin' Donuts IPO is the hit of the year! Investors are delighted, maybe, and Americans are not really anything in particular, as they're just going through the motions until death, and sticking oily/corn-syrupy things into their mouths to briefly take their minds off the misery of existing. [Bloomberg/The Street]