John Lewis Is A Comics Superhero, Prepare For Ludicrous Speed, And Earth 2.0: Your Saturday Nerd-Out 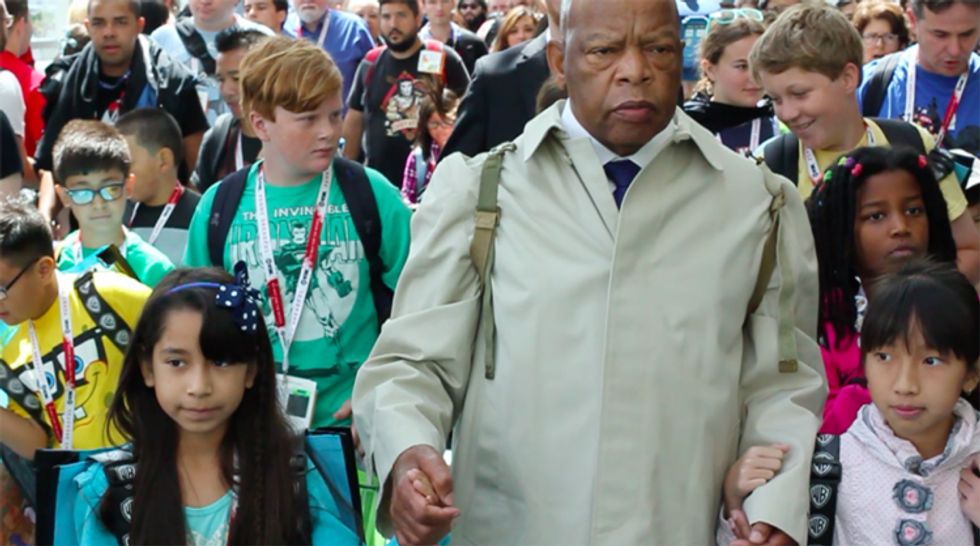 Happy Saturday, and welcome to your moment of Nerding: Just a few stories that we thought were pretty cool because they appeal to the geek in us.

Real Life Superhero Cosplays As Himself

For starters, how about congressman John Lewis of Georgia, attending his second Comic-Con last Saturday and getting into the whole cosplay scene, dressing as a character from March: Book 2, the comics memoir that he co-wrote with former campaign aide Andrew Aydin, with art by Nate Powell. To be specific, Lewis decided to dress up as the "John Lewis in 1965" character from the book. The Washington Post had a lovely story this week about how it all happened:

“We went looking for the [type of] trench coat I wore 50 years ago,” Rep. Lewis tells me over the weekend. They found, too, an accurate backpack.

“In his backpack were two books, an apple, a toothbrush and toothpaste,” Aydin tells The Post’s Comic Riffs. “He carried that in Selma 50 years ago in case he got arrested.”

Also in John Lewis’s backpack on that day in Selma was an orange. “We tried but couldn’t find an orange,” Rep. Lewis tells me of completing his new weekend costume. “In Southern California, of all places."

And there, as the three “March” collaborators arrived at their Saturday panel, was not just a large, eager audience, but a grouping of schoolchildren down in front ... Now, sitting here, were young fans of “March” — including about two-dozen bright-eyed third-graders from nearby Oak Park Elementary, a Title I school. Their teacher, Mick Rabin, had shown the wisdom to bring them to meet history in the flesh. [...]

And then, after the talk, Lewis needed to get back to the booth of his publisher, Top Shelf Productions, to sign books. Yet how to handle having so many young fans in tow?

The only true answer, of course, was to march.

Rabin says he proposed that his students walk with their living hero. “So we marched through the Convention Center to the showroom floor and the Top Shelf booth,” Aydin recounts. And as they did, the procession swelled, as some attendees joined in the parade of purpose.

It's a gorgeous story; go read the whole thing. Political wonkery meets comics nerddom, plus a passionate elementary-school teacher and a passel of kids -- and not a single Alabama State Trooper in sight. We reviewed the first book of March when it came out a couple years back, and the second volume is just as good. You should read them both, yes you should.

Media Matters found a nice surprise: The Christian Broadcasting Network ran a 700 Club news segment Thursday about Katharine Hayhoe, a climate scientist at Texas Tech who's also an evangelical Christian, and is working to convince her fellow evangelicals that climate change is really here, and that God wants people to take better care of the planet -- however it got here (creationism doesn't really come up in the piece, and frankly, that's OK with us for a change. They can keep believing the Earth is 6000 years old as long as they're willing to take action to ensure it remains livable for humans). It's all rather astonishing that this aired on the same program as Pat Robertson's hokum: