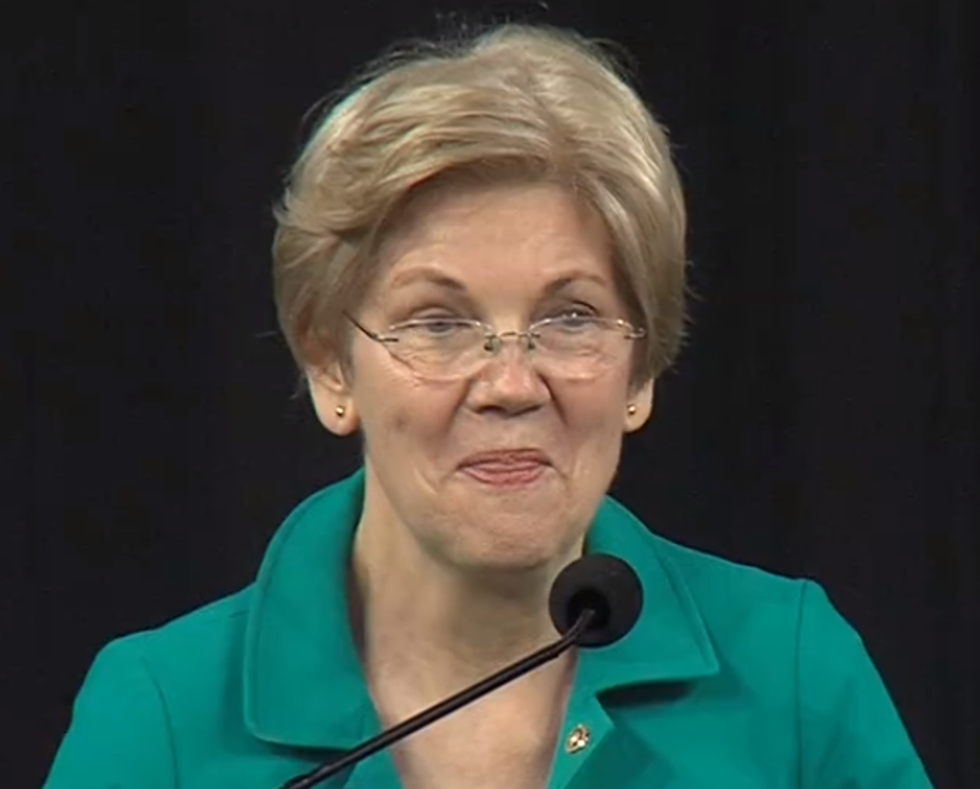 She was probably making this face when she wrote the legislation.

Is our Democrats learning? MAYBE. Senate Minority Leader Chuck Schumer is all talkin' big about how Senate Democrats are going to screw Donald Trump in his arse by doing the same thing to his Supreme Court nominee that Republicans did to Obama's nice nominee Merrick Garland. Will they follow through? Hope so! And now Sen. Elizabeth Warren and some of her Senate pals, including Sheldon Whitehouse, Tammy Baldwin, and Dianne Feinstein, have introduced some new legislation to fuck all of Trump's extremely rich cabinet nominees right in their ears:

Senate Democrats ... introduced legislation on Tuesday that would place a $1 million limit on the amount of capital gains Trump or his nominees could defer paying taxes on.

Warren argued the move would block Trump's Cabinet from getting "another special favor."

“Not only is Donald Trump giving a gang of billionaires control of our government, he’s offering them a special tax break just for signing up,” she said.

OK, that sounds boring and "tax policy" and "ZZZZZZZZ" and "whatever, Elizabeth Warren, we're sure you'll handle it without us having to learn the details," so let us explain why this is funny.

Remember that thing about how Trump's cabinet picks have a combined net worth greater than the entire bottom third of the American population, many of whom have negative net worth? Uh huh, they are rich. And when cabinet members are picked, they tend to have to sell whatever assets they have that could cause conflicts of interest (these rules don't apply to Trump of course, because no reason they just don't). People who have ONE BILLION ASSETS have a lot of stuff to sell, and they usually stick the proceeds in Treasury Bonds or mutual funds or whatever are considered OK for them to have, by ethical standards. (PFFFFT, "ethics." Aren't Republicans and Trump going to get rid of those?)

As the Washington Posthelpfully explains, there is a law "designed to help ease the sting of being forced to suddenly sell investments," that lets all these new appointed officials defer having to pay taxes on the capital gains they suddenly have, from selling all their sexxxy stocks in Walmart or Boeing or TruckNutz (big conflicts of interest, between gubmint and TruckNutz). They still owe the taxes down the road, let's say, if they sell the Treasury Bonds they stuck their capital gains moneys in, but if they just keep their many moneys where they are, then WHEEEE TAX FREE! As The Economist reports, Dubya's Treasury Secretary Hank Paulson avoided paying approximately 200 MILLION DOLLARS in taxes on the sale of a half billion he held in Goldman Sachs stock. What lucrative fun it can be to be appointed to a fun cabinet post by a preznit, right?

The law seems to make sense, even for normal rich people who weren't planning to sell all their investments right then and there. But when every single cabinet member is a multi-gatrillionaire, going into what looks to be the most godawful, kleptocratic, pay-to-play presidential administration in U.S. American hist'ry, then you have a LOT of people who stand to benefit, in the financial way, from saying, "Yes, Dear Leader Trump, it would be so many honors for me to serve your orange face and tiny man fingers! KA-CHING ALSO TOO!"

So that is why this is funny. Sure, Trump nominees, you can sell ELEVENTY FUCK-BILLION DOLLARS worth of assets, but you only get to avoid taxes on one measly million bucks worth of that. AW SAD!

Will it pass a Republican Senate? HAHAHAHA OK, YOU ARE CUTE. But it's a nice shot across the bow from Senator Liz and her pals, to send a message that they might be in the minority, but they're going to do everything in their power to be as much of a pain in the ass to the Trump administration as they possibly can.

In other words, DON'T START NO SHIT WON'T BE NO SHIT.