Beautiful Warrior Goddess Elizabeth Warren Tore Trump A New One, And Lo, It Was Good 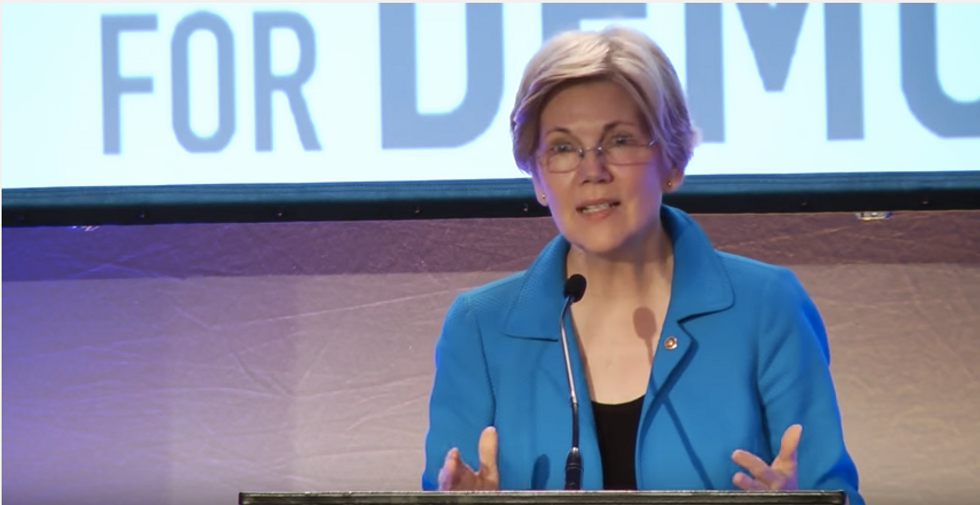 If there is anything good that has come of Donald Trump running for President so far, it is the sheer beauty of watching Elizabeth Warren completely destroy him. She is gooooooood. God, she is so GOOD. I want to have 10,000 of her babies.

Last night, speaking at the Center for Popular Democracy's annual gala, Warren dug into Trump for his 2007 remarks to The Globe and Mail about how excited he was for the housing crash and for people to lose their homes, because "I've always made more money in bad markets than in good markets." Which is a very creepy thing to say out loud. She then went after his opposition to the Dodd-Frank regulations on Wall Street and deep sympathy for the poor little bankers affected by it, when she is pretty sure he cannot even name three things about Dodd-Frank. THEN she went after his decision to not release his taxes, which is a thing presidential candidates do, unlike releasing their "long form birth certificate" as Trump demanded of President Obama for god knows how many freaking years until Obama did and then laughed so hard at him Trump was forced to run for president.

If you did not have 10 minutes to watch all of that (in which case you should watch after work because honestly it is very sexy), this is what happened in that video:

Naturally, Trump is trying to "fire back" by criticizing her for helping people in her family buy a few cheap houses (some of which had been foreclosed on), which were fixed up by her nephew, a contractor, and then later sold.

This is, of course, a very different thing from coming out and going "OH MAN, I sure am excited for people to lose their houses! More money for me!" A very different thing altogether. People are not "bad" for fixing up houses and buying houses that are already on the market. That is not the problem, and it's hardly as though not doing that would fix anything or give anyone their house back. The problem is what happens BEFORE that happens, with the predatory lenders and bankers that Trump feels so deeply for. It is also a problem to actually delight in the idea of those people losing their houses, because that is a fairly sociopathic thing to do. And the nickname thing? SAD.