Elizabeth Warren Will Give Us All The Moneys Now 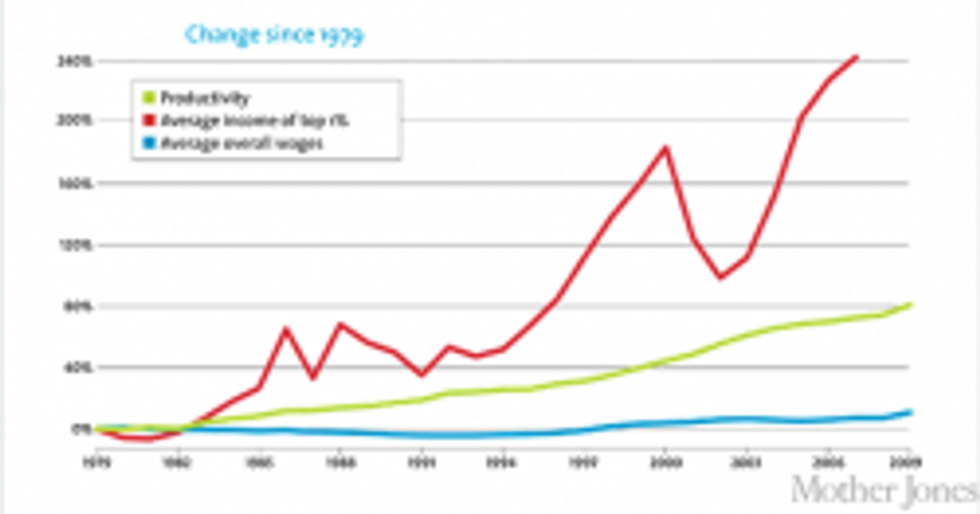 Wait. Did you hear that? That was the sound of us fluttering with delight as we watched Elizabeth Warren at the Senate Committee on Health, Education, Labor and Pensions hearing while she calmly explained how badly the American people are getting boned. Did you know, for example, that if minimum wage had kept up with the pace of inflation that it would be around $22 by now?

Ha ha ha, here is what happened -- we got fucked is what happened, basically. Your Wonkette ain't no fancy professor at no college (yet!) [Editrix note: I am, fuckers.] but we do know that someone somewhere is making all the money, and it's certainly not the workers. Here, see this chart (courtesy Mother Jones) for the purposes of critical analysis. The red line is the income of the top 1%. The greenish line is productivity. And the blue line is average overall wages (suckers!)

Anyway, Dr. Dube (pronounced Du-BAY) responds that a) the other $14.75 basically went to Mitt Romney (duh) and b) if minimum wage had kept up with the 1%'s gains in income, the minimum wage would have stood at around $33/hr before the 2008 crash.

Don't get too excited, Elizabeth Warren isn't advocating that we raise the minimum wage to $33 an hour (bummer) but she IS talking about a raise to $10/hour. Sold, we'll take it.