Elizabeth Warren Yells at Banks Again, Because It Is A Day 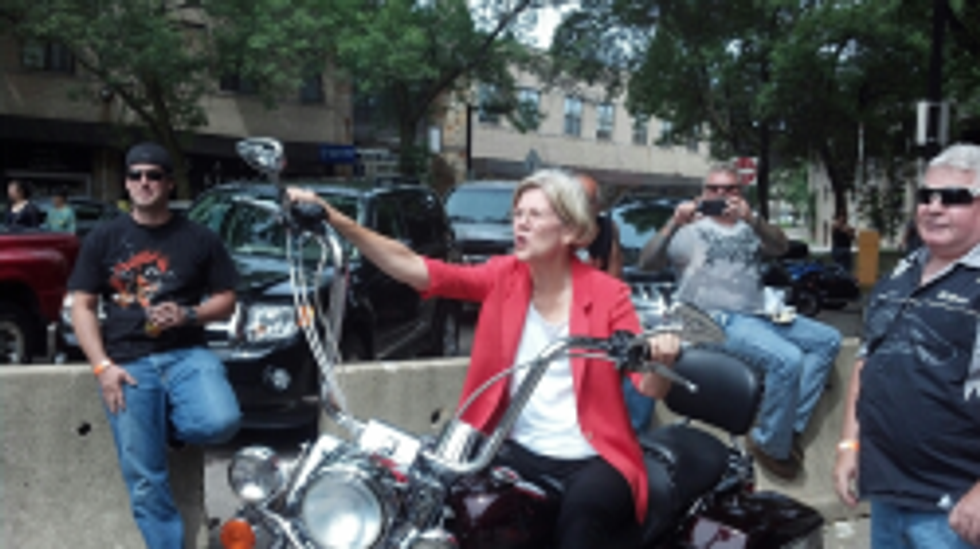 Today was just like any other day in that we woke up thinking, "Can we love Elizabeth Warren more today than we did yesterday, given that she is one of a tiny handful of people who seems not only committed to putting the banks in their place but also sufficiently empowered, politically, intellectually, and otherwise, to do so?"

And, just like any other day, we found very quickly that the answer is "Yes, we CAN love Elizabeth Warren more today than we did yesterday, because it seems like she is planning to yell at banks again, which brings us an immeasurable amount of pleasure."

Today the Senate Banking Committee met to discuss Wall Street's role in the global commodities business, and as you can imagine Senator Elizabeth Warren (D-MA) was quite outspoken about the fact that she wants it majorly diminished.

"...I share the concern of many of my colleagues about asset managers at huge Wall Street banks exercising control of key parts of America's infrastructure," she said.

Wonketteers can be forgiven for not knowing exactly what she is talking about, given that their minds have probably been too occupied with stories about the royal babby and Anthony Weiner's penis to focus intently on something as boring as aluminum trading and the banks.

Briefly: the New York Times recently revealed that due to a 2003 Federal Reserve decision, banks have been allowed to purchase physical commodities, leading Goldman Sachs to stockpile tons -- literally tons -- of aluminum in Detroit warehouses, which has driven up global prices and created aluminum shortages in some parts.

So what, it is aluminum, big deal, we are commie liberal pinkos who listen to NPR and drink lattes instead of canned soda and avoid canned food in general due to concerns about BPAs, so this does not affect us. OR DOES IT?

"In this... over the counter derivative oil market I suspect Goldman Sachs can actually manipulate price," said [Saule] Omarava, [Associate Professor of Law University of North Carolina at Chapel Hill School of Law]. "They could also affect the price of physical oil if they own tankers... I'm all for the DOJ launching an anti-trust investigation into these matters... If this is the market where JP Morgan and Goldman Sachs are playing, it makes me very uncomfortable as a banking attorney."

Does any of this sound familiar? Because it should, given that Enron was busted for (inter alia) manipulating energy prices and for causing blackouts in California and laughing all the while.

And when describing his reaction when a business owner complained about high energy prices, another trader is heard on tape saying, "I just looked at him. I said, 'Move.' (laughter) The guy was like horrified. I go, 'Look, don't take it the wrong way. Move. It isn't getting fixed anytime soon."

Perhaps Enron's example will lead us to actually DO something about the manipulation of energy prices and bank ownership of commodities, but probably it won't since we have established in this post-2008 late capitalist landscape that Incorporated Americans have their own laws and their own rules and are above trifles like "jail" or "wrongdoing."

The bright side, however, is that there will be more videos of Elizabeth Warren yelling at banks, a silver lining that we always welcome.