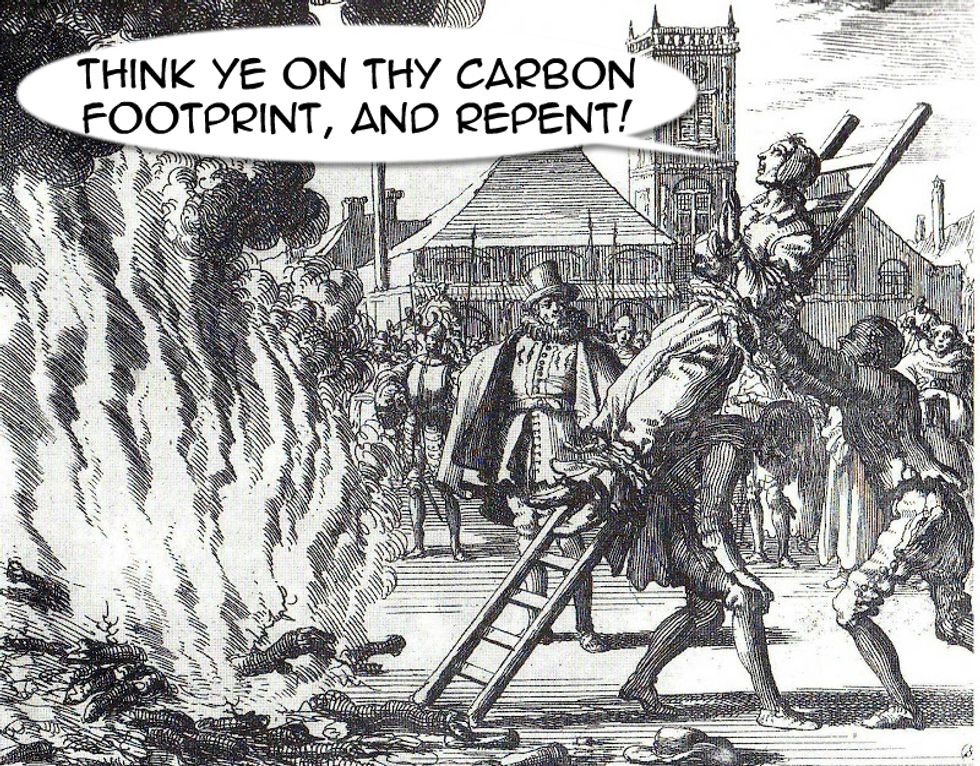 At the very least, shove me into a biomass generator!

A round of nerd applause, please, for the Department of Energy, which last week was presented with a little request from the Trump transition team: a 74-item questionnaire requesting information on the department's operations, including a demand for the names of any Energy Department employees and contractors who had worked on President Obama's climate change initiatives. The memo also requested a list of those who had attended certain scientific conferences on climate change. Employees and managers at the DOE rightly feared a coming purge, seeing as how Mr. Trump doesn't think climate change is real, and despite his denials in debates, really has tweeted that he believes a massive body of scientific research nearly universally accepted by scientists worldwide is nothing more than a hoax by China to take our jobs, hold back our industries, and corrupt and impurify our precious bodily fluids. For what it's worth, China denies making up climate change, but you know how those commies lie. In any case, DOE employees worried that the new administration was out to sniff out any secret scientists and send them off to reeducation camps where they'd be forced to watch Veggie Tales movies until they recant and agree that God runs the planet, so nothing humans do to it can affect its climate.

There is major concern amongst my members [...] I have received lots of calls, emails, messages expressing shock and dismay.

[wonkbar]<a href="http://wonkette.com/609214/team-of-evils-trumps-epa-pick-not-so-big-on-protecting-so-called-environment"></a>[/wonkbar]But you know how liberals and scientists are a superstitious lot, fearing for their jobs every time a science-denying strongman comes into the presidency promising to halt all government spending on climate research, which is a hoax. As the Washington Post notes, DOE employees have civil service protections, and can't simply be fired willy-nilly by an anti-science administration that appointed an outright climate denialist as EPA administrator. They could, however, have their budgets slashed or be reassigned to scutwork, since obviously their allegiance to the discredited tenets of "climate science" clash with the Powers That Be. Contractors, who don't have such protections, would simply have their contracts canceled so the Energy Department can focus on important work, like finding a way to require all Americans to buy several tons of coal a year.

So in the midst of this climate of uncertainty about climate (not the science, the jobs), DOE has definitively refused to provide a list of names of climate scientists to the Transition team. Department spokesperson Eben Burnham-Snyder said in an email to staff:

The Department of Energy received significant feedback from our workforce throughout the department, including the National Labs, following the release of the transition team’s questions. Some of the questions asked left many in our workforce unsettled [...] Our career workforce, including our contractors and employees at our labs, comprise the backbone of DOE (Department of Energy) and the important work our department does to benefit the American people. We are going to respect the professional and scientific integrity and independence of our employees at our labs and across our department.

The boldface was in the original email to let employees know the department has their lab-coat-covered backs.

Congressional Democrats are plenty angry about the Trump transition's apparent attempt at setting up a hit list. Second-ranking House Democrat Steny Hoyer said he was "alarmed" by the transition team's request for names, saying, "This raises serious concerns as to the motivation of such a request and raises questions of possible retribution for following President Obama’s policies." Hey, Trump only said he was no longer interested in jailing Hillary Clinton. He never said climate scientists would go unpunished for their crimes.

“This looks like a scare tactic to intimidate federal employees who are simply doing their jobs and following the facts,” added Rep. Elijah E. Cummings (Md.), the top Democrat on the House Oversight and Government Reform Committee. “I am sure there are a lot of career scientists and others who see this as a terrible message of fear and intimidation -- ‘either ignore the science or we will come after you.’”

Well, yes, fear and intimidation is pretty much the business model. In the old days, scientists would be hauled out on stretchers, and Donald Trump has had enough of all this political correctness.

It's unclear how Trump will react to the Department of Energy's defiance of the transition team's demand for a list of known collaborators with the Scientific Agenda; we'll have to see what he Tweets in the morning. Probably a demand for heads to roll, or a personal attack on either the DOE spokesperson or the union leader, because who dares defy the Great And Powerful Hairball? If the planet's really lucky, there'll be something on TV Trump doesn't like.