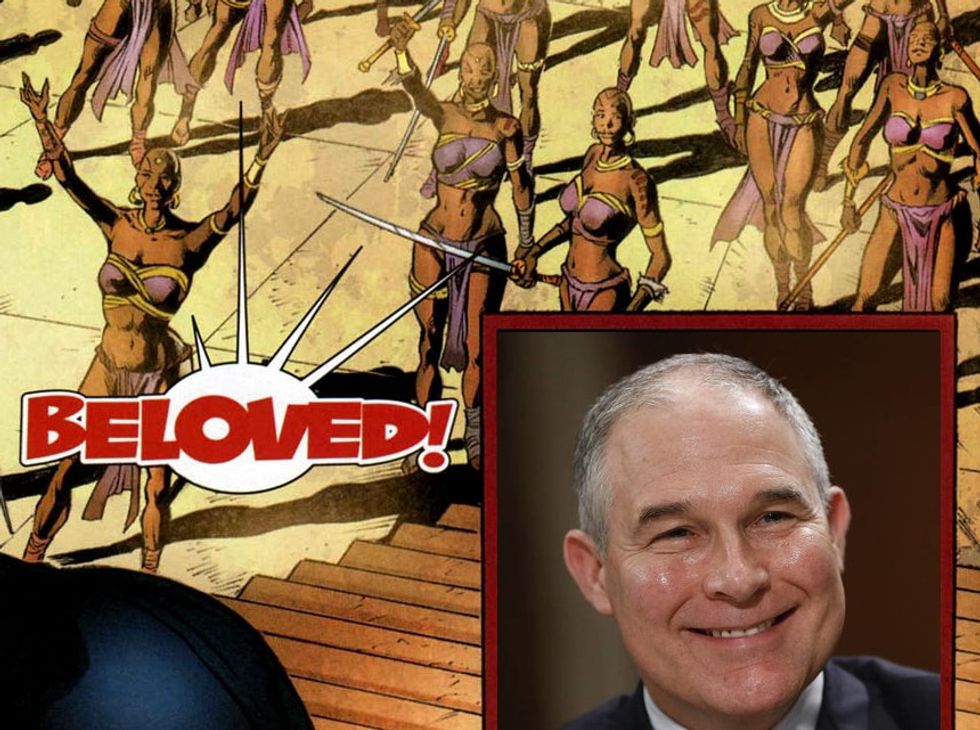 Tailings from vibranium mining are good for the water supply

EPA administrator Scott Pruitt is really obsessed with his own safety -- it's why he just has to fly first class (except when he's flying on his own dime) and have a 20-member security detail protecting him 24/7, you see: Environmental extremists are always threatening his life! It was very inconvenient, therefore, when a couple of Democratic senators went and released a summary of an internal EPA memo which found there was no basis for the agency's claims that Pruitt faces an incredible number of threats. According to that memo, written in February, intelligence officials at EPA had "not identified any specific credible direct threat to the EPA administrator," according to the letter from Senators Tom Carper of Delaware and Sheldon Whitehouse of Rhode Island.

When the news broke this week, the agency took quick action: It shitcanned the EPA official who'd authorized the memo. Politico has the awful truth:

Mario Caraballo was the deputy associate administrator of EPA's Office of Homeland Security, which in February concluded that an earlier assessment failed to identify credible direct threats against the administrator that would justify his heavy security spending [...]

One source with direct knowledge of Caraballo's dismissal said the agency claimed he was let go because of a personnel issue from a previous military job nearly a decade ago that had been resolved then and already been reviewed by EPA several years ago. That source said senior officials also were not happy with the report from Caraballo’s office.

“They’re trying right now to just keep pressure on the wound,” the source said. “They’re trying to find out where these leaks are coming from ... They’re in full panic mode right now.”

In their letter to Senator John Barrasso, the Wyoming Republican who chairs the Environment and Public Works Committee, Senators Carper and Whitehouse asked for oversight hearings to look into the EPA's apparently exaggerated threat assessments, based on the content of the February memo and other internal EPA documents.

Carper and Whitehouse offered these scary examples of what poor Scott Pruitt has had to endure, from an October 2017 memo by a member of Pruitt's personal security detail (PSD). Yr Wonkette is not a security professional, but they don't exactly sound like death threats to us:

The letter notes that not a single incident in the memo mentioned air travel, although that seems awfully short-sighted -- what if that one guy with the old paint scrapings brought them on a plane, huh?

Carper and Whitehouse cite a portion of the February report that Caraballo had approved, for which he was later given the boot:

Nevertheless, the EPA and Donald Trump have both repeatedly cited "death threats" against Pruitt as justification for his fiercely loyal Dora Milaje security detail, which sometimes has to pull EPA law enforcement members off actual investigations of environmental crimes to protect Pruitt from nothing.

In response to the letter, Senator Barasso said there wouldn't be any oversight hearings, and also got angry at the two Democrats for revealing internal EPA security information, although they'd done nothing of the sort:

"I am deeply troubled that members of the committee would publicly release law enforcement sensitive information regarding the safety and security of a cabinet member and his family,” Barrasso said in a statement. "This letter selectively quotes non-public documents."

Barrasso added that "any reasonable reading" of those documents supported a conclusion that Pruitt faced a "variety of direct death threats."

Nope, nuh-uh, no death threats, at least according to the memo that pushed back on that narrative, getting Mario Caraballo fired for his trouble. Senator Barrasso didn't say anything about that particular part of the story, which is one heck of a surprise.

The New York Times has more on how the EPA has been sifting through social media to assess whether anyone out there is trying to kill Scott Pruitt -- and again, there isn't any evidence that Pruitt is in danger. We also learn that Pruitt has been accompanied by his personal Sarduakar brigade for non-work outings to such highly dangerous sites as Disneyland, the Rose Bowl, and some college basketball games, which only makes sense since Donald Duck could have an Uzi under his big fiberglass beak and NODODY would be the wiser.

The Times also heard from an EPA employee who'd attended a briefing about the supposed threats to Pruitt:

The employee said the briefing highlighted mostly criticisms of Mr. Pruitt’s policies as having a deleterious effect on the environment, rather than instances of threats to his personal safety.

You know, it's almost as if the EPA is having a hell of a lot of difficulty justifying all that security.

“The fact that 10,000 people say, ‘I hate Scott Pruitt’ on Twitter doesn’t suggest to me there is a threat against Scott Pruitt,” said Ms. Patel, who is co-director of the center’s liberty and national security program. “It suggests there are a lot of people who dislike Scott Pruitt.”

Here is a verified photo of Ms. Patel:

I don't have low self-esteem. I have low esteem for everyone else.

She's no doubt on a watch list herself now.

Yr Wonkette is supported by reader donations. Please click here to send us money!/a> And maybe a Bearcat armored truck. You know, for parties.