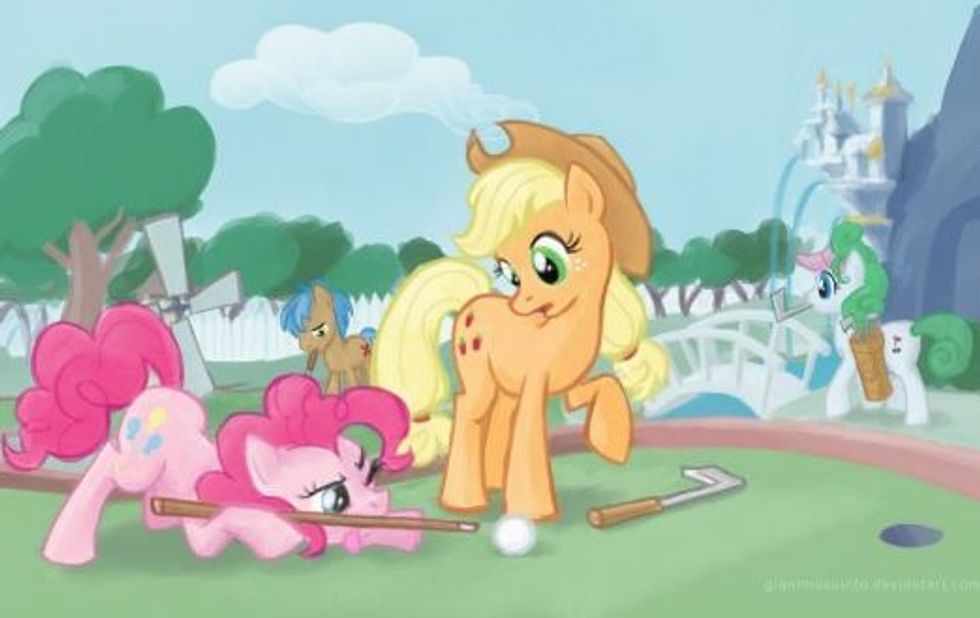 You don't care for the ponies? Seriously, you WANT a picture of Eric Trump? Ewww.

Well, gosh, looks like the Lamestream Fake News Media is just making up all sorts of nonsense again out of a vicious desire to portray Donald Trump as some sort of rich guy whose shadowy finances are shadowy. The latest example: a story from this weekend's public radio sports show "Only a Game," during which sportswriter James Dodson recalled a conversation he'd had while playing golf in a foursome with Donald Trump's son Eric in 2014, and Eric intimated the family was getting lots of money from Russian sources. Eric now vigorously denies the report, and accuses Dodson of being a filthy lying liar, Dodson stands by his story, and what this probably means is that not only will public radio lose the federal funding pittance it gets now, it will be charged extra by the Trump administration to even exist anymore.

Dodson said that when he arrived at the Trump National Charlotte golf course, Trump the Elder was giving a little talk about what a terrific golf club it was, and how lucky his new club members were to be playing on such a terrific golf course, and so Dodson asked how Trump could afford expanding his golf holdings in the wake of the big recession. Trump "just sort of tossed off that he had access to $100 million," said Dodson, and then they got to golfing. In the golf cart with Eric, Dodson asked where all that funding was coming from, since as far as Dodson -- a golf writer who keeps up with the golf business -- knew, the golf biz was still in a slump (no matter how much golf Obama played!!!!):

"as we were setting off, I said, 'Eric, who’s funding? I know no banks — because of the recession, the Great Recession — have touched a golf course. You know, no one’s funding any kind of golf construction. It’s dead in the water the last four or five years.' And this is what he said. He said, 'Well, we don’t rely on American banks. We have all the funding we need out of Russia.' I said, 'Really?' And he said, 'Oh, yeah. We’ve got some guys that really, really love golf, and they’re really invested in our programs. We just go there all the time.' Now that was three years ago, so it was pretty interesting."

Dodson, who's written a bunch of golf books, wasn't especially kind to Trumpdaddy in the piece, which may have added to Eric's angry reaction; Dodson says Trump told him he hadn't read any of Dodson's books, "Because I really don’t get much chance to read books." (Real reason: Trump never reads anything that's not about him.)

"'But I write books. Have you read my books?'" I deadpanned. I said, "Yes, they’re all stacked up on my bedside table. I haven’t gotten to them yet." But he didn’t seem to get the joke. And we’re walking in this bro hug. I mean, very snug, and he’s a big guy. And he said, "So, you’re a journalist. You didn’t get to ask me any questions. Ask me anything you want. I’m the most open interview you’ve ever had. I’ll tell you anything. Straightest talker you’ve ever met."

Then after a bland question about whether Trump would run for president, Dodson asked him a toughie:

honestly, the question that kept popping up in my head is: Are you as big an a--hole as you seem? Or do you just play one on TV? And this is what he did. He dropped my arm like it had caught fire spontaneously, stepped back at least a yard, made that kind of constipated furious pig face he makes, slapped my back, doubled over and popped up laughing like you can’t believe and declared, "Yeah, it’s fun, isn’t it?"

We're just giving you some context for Eric Trump's angry denial of the Russia part of the story here, because even though Dodson says he liked Trump when he met him, he did call Eric's daddy an asshole to his big asshole face. Eric Trump went Twitter Nuclear in response to a story in The Hill Monday, explaining he never said anything of the sort and Dodson is a MONSTER and the Trump family has never, ever had any connections to Russia:

Strangely, Eric didn't also send out a Tweet yelling at his brother Donnie for saying in 2008, “Russians make up a pretty disproportionate cross-section of a lot of our assets. We see a lot of money pouring in from Russia.” Then again, Don Jr. never called the old man an asshole. Eric Trump also told the New York Post the story was "complete garbage" and "We have zero ties to Russian investors," which makes it true.

And what about Dodson? He told "Only A Game" Monday he recalled the story accurately:

"That's what Eric said to me. Absolutely. That's the long and short of it, I'm afraid."

Dodson said his memory of that day is "very clear. Very clear."

Dodson said there was no reason to feel this was a "controversial" comment.

"It didn’t mean anything to me at the time," he said. "I thought, Good on you! In fact, I think I congratulated him. I said, 'Good. You’re the one guy who can find funding for golf courses.'"

Well, you can just hear the anti-Trump hatred dripping from those fake news comments, now can't you? This Dodson guy had better not keep talking about the confidential financial info Eric Trump shared with him in South Carolina.

We suppose the president could clear up where his funding comes from if he releases his taxes, but until he's no longer "under audit" (a term of art meaning "president, running for president, or in the public eye in any way"), we'll just have to settle for uncertainty, plus outraged denials. Gosh, if only there were some way Congress could find out more about the president's financial dealings and whether they create any conflicts of interest. Ah well, that's the way it goes.

Yr Wonkette knows where our financing comes from: you, the reader! Please click the "donate" clicky below!