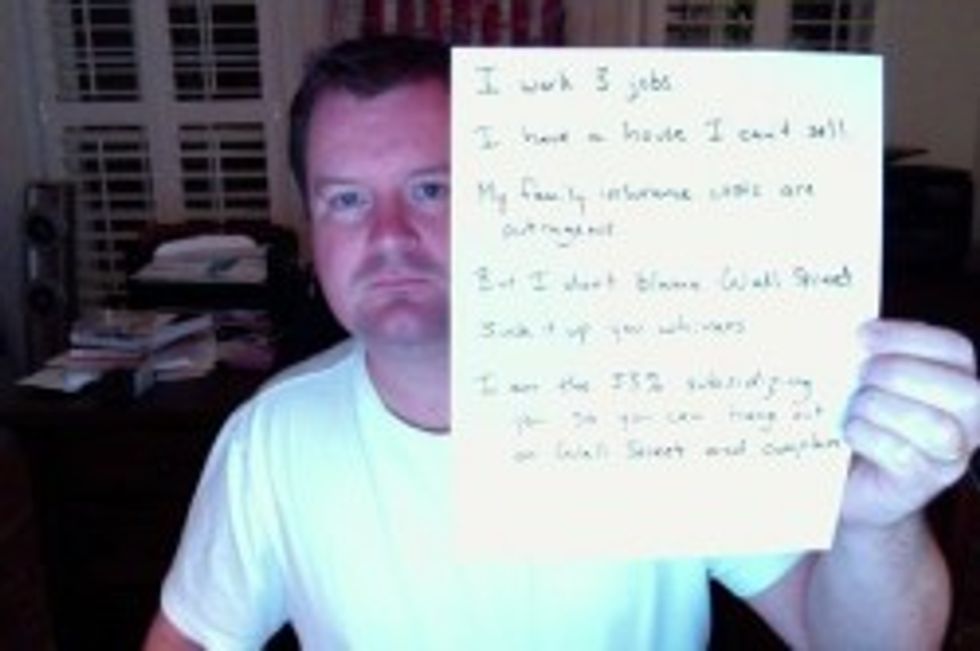 Yesterday, as even yourgrandmother’s Myface picture turned into that equal sign, you might have been under the false impression that the possible end to the embarrassing prohibition on equal marriage rights was a “good” thing. You might believe that the sputteringly awful arguments of the lawyer supporting Prop 8 indicate that even the bigots see the end to this last vestige of de jure segregation as inevitable, but that belief itself is bigoted. Luckily for us there’s still one sane man left in this country, and whatdoyaknow he has himself a blog!

You see, everyone down in America has decided that they liked gay marriage a lot, but Erick Erickson, who lives just north of "Swinging Richards," DOES NOT.

Erickson hates the gays. He hates their whole pride season. Now please don’t ask why. No one knows quite the reason. It could be that his head wasn't screwed on quite right. It could be, perhaps, that they sold him pants that were too tight. But we here at Wonkette think that the most likely reason of all may have been that his heart was two sizes too small. Oh and that he is a giant red-headed beignet full of rancid creamy hate:

Yes the government should completely ignore the existence of the social construct known as marriage and instead just treat everyone as individuals regardless of their living arrangement or the depth of this strange emotion we humans call “love.” There are literally no possible negative consequences to allowing religions to self-regulate the institution without regard for civil rights in a modern democracy (better hope that one of your kids doesn’t marry a Catholic person in this glorious utopia Erick, because that shit’s gonna be permanent).

Let’s ignore, for the sake of this post, that the Democracy of the Dead has settled for us that in society marriage should be between a man and woman as the best way to propagate the species.

The left has done an admirable job in secular society making the case that gay marriage merely allows a class of people to be happy and have what everyone else has.

Apparently “be happy” is synonymous with “being treated like a fucking human being." But sorry Erick you were straining to force a point out of your overexerted mouth sphincter...

The front on which the gay rights movement has failed is the religious and, in particular in the United States, the Christian front.

That’s an interesting point, especially given this ABC/Washington Post Poll from a week and half ago:

Sentiment among religious groups shows the same kinds of trends. Among non-evangelical white Protestants, 70 percent in this poll support gay marriage, compared with fewer than half as many of those who describe themselves as evangelicals, 31 percent. But that’s up by a nearly identical 25 and 24 points among these groups, respectively, since 2004. Support for gay marriage also is up, by 19 points, among Catholics, to 59 percent.

But maybe Erick’s Presbyterian Church down in Georgia is one of those real ol’ time religion outfits where folks know to stay in the closet lest they are cast out behind the back of a pick-up truck and dragged around the parking lot while tied to its bumper (i.e. just as Jesus would have wanted).

But Erick fears more than just the prospect of having to share his tax-filing status with sodomites. Erick is here to warn all of us of a bleak future where the pink swastika of oppression overwhelms all of freedom loving America with its siren songs demanding equal protection under law and never-ending house music:

As long as there are still Christians who actually follow Christ and uphold his word, a vast amount of people around the world — never mind Islam — will never ever see gay marriage as anything other than a legal encroachment of God’s intent.

So those Christians must be silenced.

Wait the Human Rights campaign is organizing a pogrom against Christians by using Ellen Degeneres and Anderson Cooper as modern day Hutu-power disk jockeys? HOW COULD WE HAVE BEEN SO BLIND?!!

Any Christian who refuses to recognize that man wants to upend God’s order will have to be driven from the national conversation. They will be labeled bigots and ultimately criminals.

Like the Criminalizing Assholery Act of 2014 has a chance of getting through this Senate without getting filibustered or heaped with awful Amendments. Get real Erickson.

Already we have seen florists, bakers, and photographers suffer because they have refused to go along with the cultural shift toward gay marriage. There will be more.

Yes there must be throngs of workers and businesspeople from the wedding industrial complex out there in this splendid economic environment who will suffer immensely when their possible customer base expands instantly by 10%. Hopefully those few proud Christians who publicly refuse to serve gay folks will receive their full wingnut welfare martyrdom check before any real damage is done to their tasteless businesses.

Within a year or two we will see Christian schools attacked for refusing to admit students whose parents are gay. We will see churches suffer the loss of their tax exempt status for refusing to hold gay weddings. We will see private businesses shut down because they refuse to treat as legitimate that which perverts God’s own established plan. In some places this is already happening.

Oh noes their tax exempt status is at risk! That horrific action from the IRS almost crippled Bob Jones University when they refused to drop their ban on interracial dating back in the 1980s. You almost never hear about that formerly pure and wonderful place anymore. Maybe if there was some sort of barrier, or hedgerow maybe, that would prevent the government from interfering in the business of a religious institution.

Christians should, starting yesterday, work on a new front. While we should not stop the fight to preserve marriage, and we may be willing to compromise on civil unions, we must start fighting now for protections for religious objectors to gay marriage.

Churches, businesses, and individuals who refuse to accept gay marriage as a legitimate institution must be protected as best we can. Those protections will eventually crumble as the secular world increasingly fights the world of God, but we should institute those protections now and pray they last as long as possible.

Erick Erickson wants all you bigots to put your faith in god that the tiny residue of irrational hatred that we have left in society against homosexuals lasts until god can provide us with a miracle. It’s like Maccabees and Hanukkah, only instead of preserving oil we must now conserve our bigotry for the eventual festival of homophobia so that future generations of assholes can celebrate our collective myopia.

Now many of you have read through this and you are shaking your head in denial. “No way this is possible,” you say. But then just a decade ago no one seriously considered gay marriage as possible. And we are already seeing signs we’re headed in this direction. It’s coming. Get ready.

Just ask your grandparents about the days when the darkies decided that they wanted the right to vote and stuff. GREAT GRANDPA BEDFORD FORREST WARNED Y’ALL THAT THIS WOULD HAPPEN! SHOULD HAVE FOUGHT HARDER FABUS!

Libertarians will have to decide which they value more — the ability of a single digit percentage of Americans to get married or the first amendment. The two are not compatible.

Now Erick is just being vague. Does he support allowing the government to restrict the right to marriage to preclude gay people because they only represent roughly 10% of the population? Because if that is the case he and his fellow Presbyterians, who collectively only represent 2.1% of the country, had better watch out lest Cardinal Santorum becomes president in 2016 and decides that he’s tired of those apostasy filled schismatic churches interpreting the sacred institution of marriage. Maybe you can make another sad ass tumblr about it (although somehow "protect the 2%” sounds even more lame than your previous fail).

Move on to a new group of people to pathologically hate Erick. Gay bashing is so 2004.