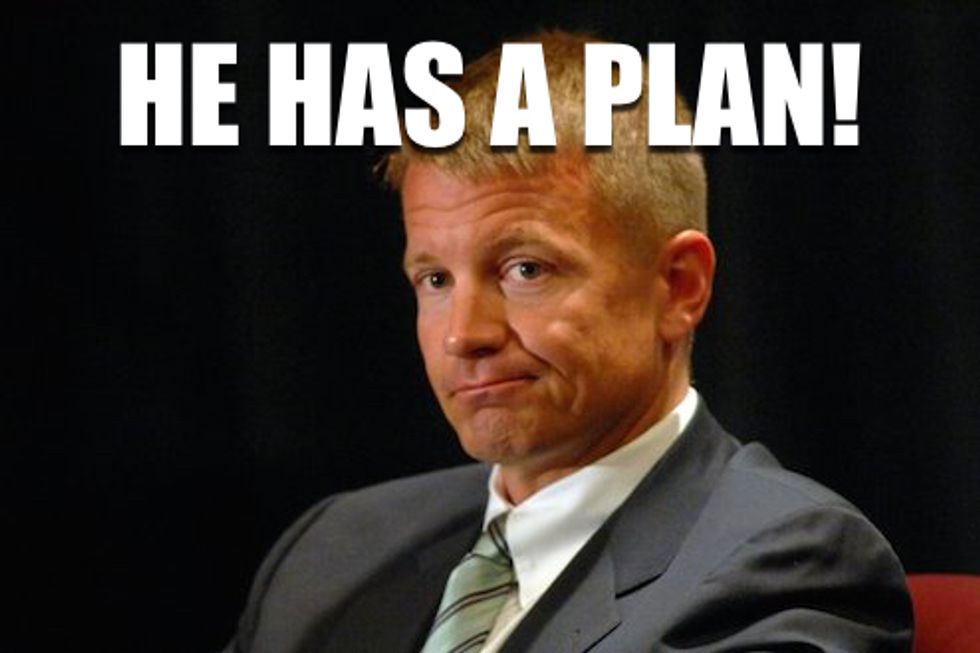 Why is Erik Prince back in DC? Is Donald Trump so senile that he only can keep track of like 27 names? Is that why they haven't appointed anyone to all those open jobs? It's like the White House got to the bottom of the list of Rich White Dudes Trump Knows and just started all over. And like magic, Betsy DeVos's lunatic brother reappears to rub his guns on Poppy's junk and make him feel like a Real Man™ again.

When last we left the unflushable Mr. Prince, he was sneaking in the back door of Trump Tower to inject testosterone into the transition team. And having a secret meeting with a Putin associate in the Seychelles, but definitely not on behalf of Donald Trump! Also, too, there was that time in November when Erik, Kellyanne, and future NSC member Kevin Harrington just happened to be on the same Acela train shooting the shit about reorganizing the US intelligence apparatus. As Bloomberg reported,

In one informal discussion in late November, Prince spoke openly with two members of Trump’s transition team on a train bound from New York to Washington. He boarded the same Acela as Kellyanne Conway and they sat together. Joining the conversation at one point was Kevin Harrington, a longtime associate of Trump adviser Peter Thiel, who is now on the National Security Council. They discussed, in broad terms, major changes the incoming administration envisioned for the intelligence community, as recounted by a person on the train who overheard their conversation.

Funny you should ask! A mere three months later, Steve Bannon foisted Prince and his billionaire buddy Stephen Feinberg onto Defense Secretary Mattis for a pitch meeting at the Pentagon. Prince, the founder of Blackwater, and Feinberg, the owner of the military contracting company Dyncorp, had some "outside-the-box" ideas for incorporating more hired mercenaries into the US's Afghanistan strategy. Safe bet that the pitch resembled Prince's May op-ed in the Wall Street Journal where he called for the US to establish a viceroy in Afghanistan. Literally.

First, [the President] should consolidate authority in Afghanistan with one person: an American viceroy who would lead all U.S. government and coalition efforts—including command, budget, policy, promotion and contracting—and report directly to the president. [...]

For 250 years, the East India Company prevailed in the region through the use of private military units known as “presidency armies.” They were locally recruited and trained, supported and led by contracted European professional soldiers. The professionals lived, patrolled, and—when necessary—fought shoulder-to-shoulder with their local counterparts for multiyear deployments. [...]

Wonkers, can you guess what's coming? Are you on the edge of your seats?

An East India Company approach would use cheaper private solutions to fill the gaps that plague the Afghan security forces, including reliable logistics and aviation support. The U.S. military should maintain a small special-operations command presence in the country to enable it to carry out targeted strikes, with the crucial difference that the viceroy would have complete decision-making authority in the country so no time is wasted waiting for Washington to send instructions. A nimbler special-ops and contracted force like this would cost less than $10 billion per year, as opposed to the $45 billion we expect to spend in Afghanistan in 2017.

Yes, DynCorp has already pocketed $2.5 billion in Afghanistan. But if greed is good, then these guys are THE BEST. So Feinberg and Prince, who happens to have a paid militia in the UAE, want to help America by taking several billion dollars and overthrowing a country. Just. Like. The. Good. Old. Days. These guys even want to get the whole band back together and have the CIA supervise!

So, will Erik and Steve survive the Shark Tank? The New York Times is skeptical.

Mr. Mattis listened politely but declined to include the outside strategies in a review of Afghanistan policy that he is leading along with the national security adviser, Lt. Gen. H. R. McMaster.

Womp womp. Sadly, the former general saw one or two problems with the plan to outsource US army activities to a band of mercenaries. For one thing, Afghanistan is a giant opium factory run by warlords. Maybe turning the place over to a brigade of paid gunmen is a bad idea? We're just spitballing here, but perhaps the US government doesn't want to put a rent-a-militia in charge of the place where 90% of the world's heroin is produced?

Well, we know Steve Bannon and his nationalist goons are tired of spending money for the US to be "the world's policeman." Add in libertarians like Prince and Thiel who don't mind the drug trade as long as they can make money. And Kellyanne has to cross her knees every time she even thinks about Ronald Reagan, PBUH.

Hooray! The '80s are back! Sure we fucked up with the Sandinistas. But no one ever proved the CIA was selling cocaine to fuel a dirty war in Nicaragua! Anyway, Donald Trump could be selling black tar heroin in the rose garden and Paul Ryan wouldn't hold Iran Contra hearings. Now we're not saying that Bannon and Prince are planning to jack the Afghan heroin trade so they can fund the Foreverwar in Eastasia, get rich, AND cut taxes. But the New East India company needs to get paid somehow -- ain't nobody subduing Afghanistan for $10 billion dollars a year!

Yeah, yeah ... we know it sounds crazy. But Don Jr. just tweeted email evidence of a criminal conspiracy with the Russian government. They're dumb enough. They're greedy enough. And if they can get away with it, they'll do it for sure!

We are hired guns! Please pay us so we can make words instead of overthrowing a country and stealing its drugs! It's the right thing to do!