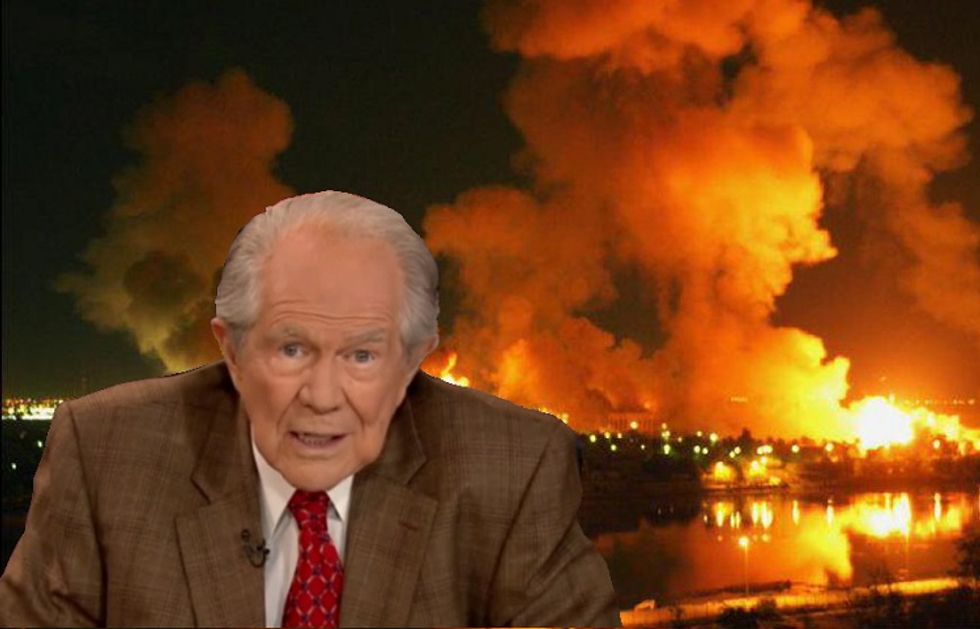 Pat Robertson is just the latest rightwinger to decide that, as of right now, the Iraq War wasn't such a terrific idea after all. Not that George W. Bush sold us the war based on a pack of lies or anything -- he was just misled by the flawed intelligence, don't you know. But on Tuesday's episode of the 700 Club, Robertson was pretty clear that the war was a bad idea from the get-go, and everybody knew it (except for how they didn't know it at the time, of course). Not that too much introspection is called for, because hey, it happened, what're you going to do about it?

We don’t really gain anything by looking back and having recrimination [sic] about what would you have done and couldn’t have done and so forth. The thing is, what are you going to do now? You’ve got an immediate threat and you’ve got to deal with it.

This is just wisdom, because as we all know, those who do not think about the mistakes of history don't have to take any responsibility for them. Robertson continued,

But the truth is, going into the Iraq in that war was a big mistake. We interviewed on this program, I interviewed Saddam’s bombmaker, he was the man who was supposedly in charge of thermonuclear weapons for Iraq and Saddam Hussein, and he basically said they do not have the technology and ability to bring out a nuclear bomb.

Darn those incompetent intelligence agents who gave George W. Bush exactly the slanted intelligence analysis that he asked for! So welcome to the Iraq Revision Fuck-Tussle, Pat Robertson; and if you're blaming "faulty intel," you too are wrong.

Robertson was singing a slightly different tune back in 2003, when he insisted that the war was justified and holy, just as long as we took care not to kill too many civilians, explaining that "we're on solid ground, not only in terms of Christian, biblical concepts, but also in terms of public relations." It's pretty important to consider the PR aspects of any moral choice, of course.

But as Pat says, let's not dwell on the past -- let's look at the huge mess that Barack Obama made of Iraq:

But what was done later by Obama has been a worse mistake, because having gotten us in there, then he allows these radicals to take over the country, and all the gain, and all the treasure, and all the sacrifice of men and women's lives has been wasted, and that to me is a great tragedy as well.

Gosh darn it, why did Obama get us in there like that and then invite ISIS to take over? And also, why did Obama elect Nouri al-Maliki during the Bush administration and make him discriminate against Sunnis? You can see why Pat isn't too big on looking back, because, having acknowledged that going into Iraq was a terrible idea in 2003, he now says that we need a "massive effort to destroy ISIS," before it takes over the entire Middle East, although Robertson's a bit short on the details of how we're supposed to prevent that. Hey, maybe another land war in Asia?