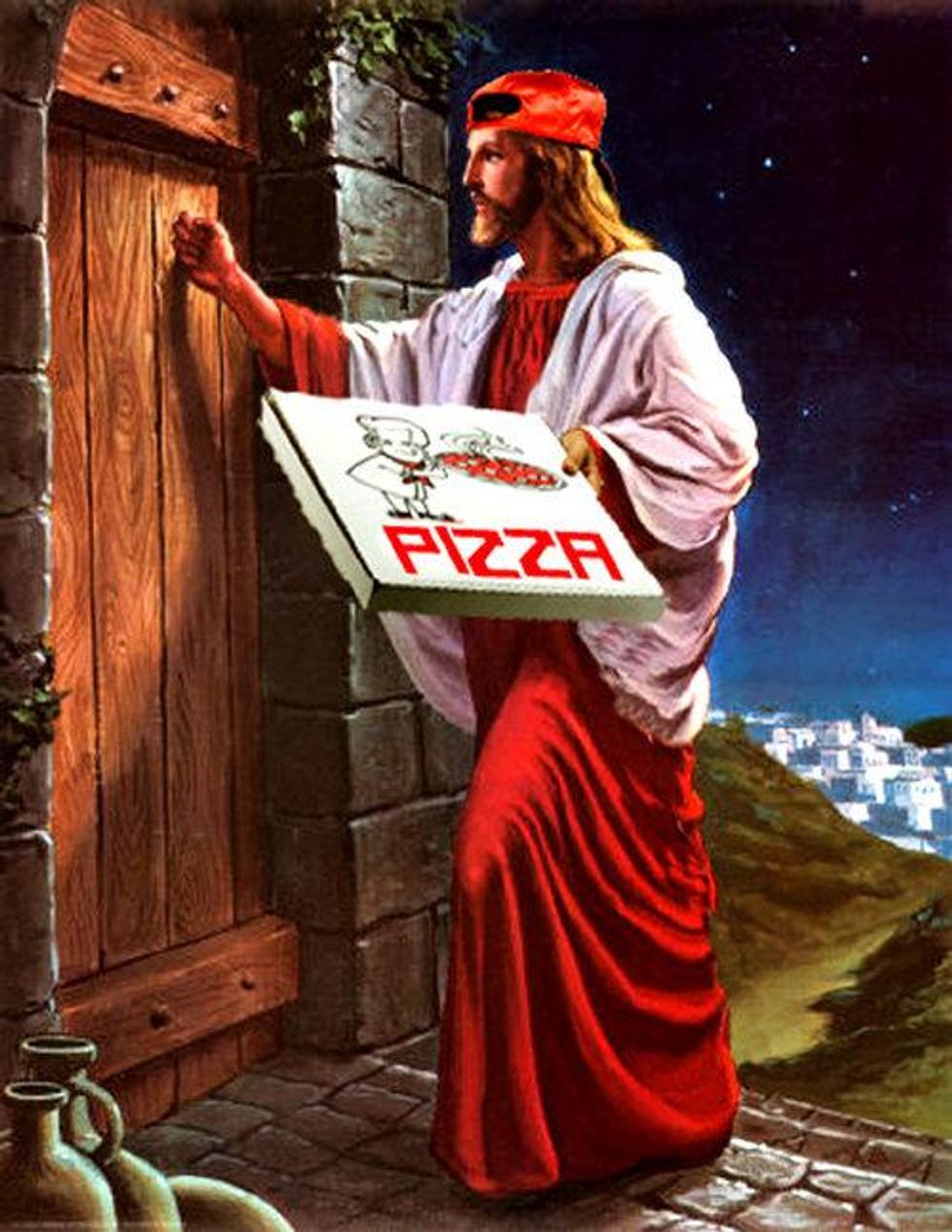 The only pizza you can trust.

The New York Times ran a fascinatingly depressing interview with Edgar Maddison Welch, who prefers to go by his middle name, conducted in jail in Washington DC where he's being held on charges related to his armed "self-investigation" of the fake-news stories that Hillary Clinton and John Podesta were running a child sex trafficking ring out of Comet Ping Pong, a northwest DC pizzeria. It's a really sad look at a really sad man. A really sad man who had no difficulty at all getting heavily armed up and walking into a pizza restaurant with a gun, to get the answers he thought he deserved.

[wonkbar]<a href="http://wonkette.com/609076/citizen-shoots-up-dc-pizza-place-to-investigate-hillary-clintons-child-sex-ring-as-one-does"></a>[/wonkbar]As a case history of American "news" consumption, it's also more than a little frightening. To recap: Idiots on the internet decided since some of Podesta's emails released by Wikileaks sounded weird, they were undoubtedly evidence that Podesta, Clinton, and half the Democrats in Washington were serial child molesters, based on no evidence whatsoever. It's difficult to say to what degree any of the people "investigating" the stories really believed them -- some were out and out fake news sites looking for clicks, others genuinely sincere conspiracy loons who think the world is one big plot, and plenty just enjoyed shit-posting anything that might hurt Hillary Clinton. The scary thing about Welch is that he really took this crap seriously, and worried a lot about those poor nonexistent kids being raped in Hillary's sex dungeons, so he says he decided to check it out for himself. As he told the Times's Adam Goldman, "I just wanted to do some good and went about it the wrong way."

We'd say most plans to "do some good" that involve carrying a semiautomatic rifle into a pizza joint probably fit that description.

Welch told Goldman he made the 350-mile drive from North Carolina to DC Sunday morning after telling his family he "had some things to do." His goal, he said, was simply to take a "closer look" at Comet Ping Pong so he could "shine some light on" the stories he'd heard about the child sex ring. During the drive, he says, he felt his “heart breaking over the thought of innocent people suffering," an admirable bit of empathy for nonexistent victims, with a remarkable blind spot for any trauma experienced by people who sheltered in place in the blocks surrounding the restaurant while they feared a madman with a semiauto rifle might come for them next. He wouldn't say why he took the gun inside the restaurant or why he fired a shot once inside, but the criminal complaint against Welch says he was "armed to help rescue" the "child sex slaves" he believed were being held there.

Welch also liked to talk like a Real Internet expert investigator, telling Goldman that when he discovered there weren't any secret dungeons full of captive children, "The intel on this wasn’t 100 percent,” but also refusing to dismiss the online stories he'd seen and heard about the supposed sex ring -- he'd only concede there were no child sex slaves "inside that dwelling." He's also certain child sex slavery is very real, which it is -- just not run by presidential candidates, because the world really is not a third-rate spy novel. He also said he'd initially heard about the rumors by word of mouth, then after he got internet service installed at home, was "really able to look into it,” and was completely convinced by all the online sources he'd seen, which struck him as credible proof that "something nefarious was happening”:

He said one article on the subject led to another and then another. He said he did not like the term fake news, believing it was meant to diminish stories outside the mainstream media, which he does not completely trust. He also said he was not political. While once a registered Republican, he did not vote for Donald J. Trump. He also did not vote for Mrs. Clinton. But he is praying that Mr. Trump takes the country in the “right direction.”

As for his media diet, Welch told Goldman he didn't believe in conspiracy theories, but also said there should be a whole new investigation of 9/11 and that he listens to Alex Jones, who he describes as "a bit eccentric [...] He touches on some issues that are viable but goes off the deep end on some things." So it's good to see Welch applies his critical thinking skills to stuff.

This might be a good place for you to despair about whatever hopes the founders may have had about an educated citizenry acting in the interests of the public good. Or to weep over Americans' basic media literacy. Or to go buy as many guns as you can, because they shouldn't all belong to people like Edgar Maddison Welch.

Welch also said he's become very religious in recent years, and shared with Goldman the Bible verses tattooed on his back:

Even youths grow tired and weary, and young men stumble and fall; but those who hope in the Lord will renew their strength. They will soar on wings like eagles; they will run and not grow weary, they will walk and not be faint.

And apparently, now and then, they'll get so het up over what they think is really well-documented nonsense that they'll feel they need to soar on the wings of eagles into some pizza place, armed to the teeth, to rescue nonexistent victims of a nonexistent sex ring made up by people who think presidential candidates are bad guys out of a really bad action movie.

[wonkbar]<a href="http://wonkette.com/609230/infowarss-alex-jones-says-your-wonkette-is-fake-news-we-are-for-shamed"></a>[/wonkbar]The depressing thing? The ConspiracySphere is already busily dismissing the interview as government disinformation aimed at hiding the real truth about #pizzagate, noting that of course it was written by a Jew, and wondering why the "names of these journalists behind these phoney stories always read like a Tel Aviv phone book?" Obviously, the very concept of "fake news" is simply part of the vile conspiracy to keep the REAL truth from getting out. Clearly, their intel is 100%. And obviously, since we refuse to accept the blindingly factual evidence of #pizzagate, (((Yr. Wonkette))) is also in on the plot. But you already knew we were a notorious fake news site, according to Alex Jones. OR ARE WE? FALSE FLAG! CHEMTRAILS! HAARP! KEEP SENDING US MONEY, SHEEPLE!!!!!