Even President Trump's Schedule Is A Filthy Lie 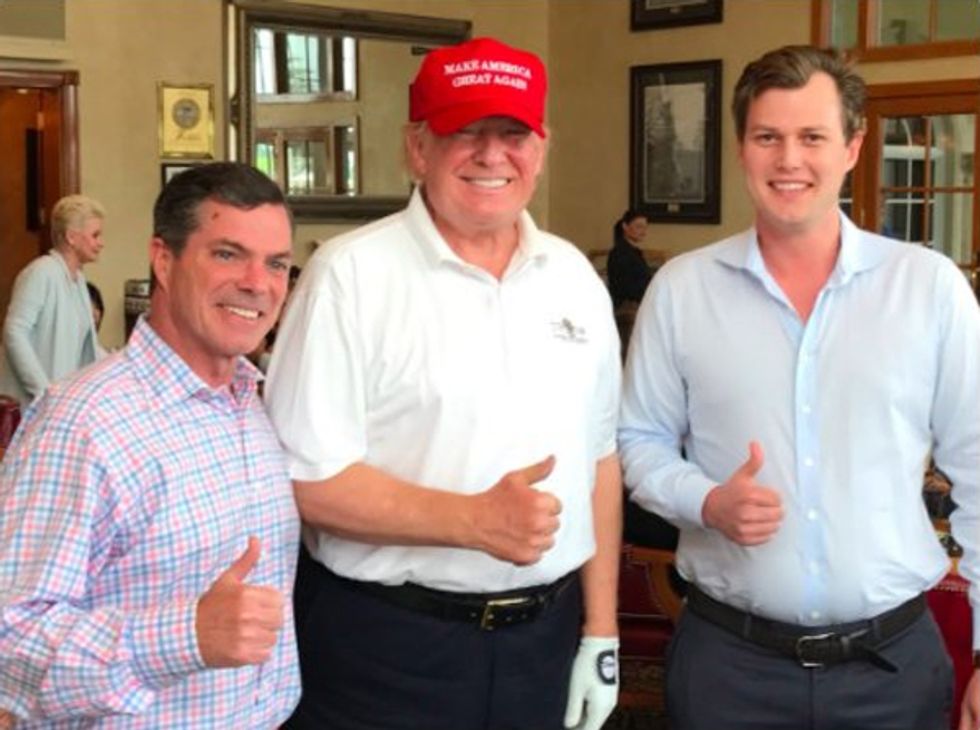 Donald Trump hard at work reforming Veterans Affairs, or calling Brazil or something.

Buzzfeed's Chris Geidner posted a pretty cool series of Tweets this weekend that offer more useful insights into how the Trump White House just plain has a problem with facts, and has little regard for some very simple basics of conveying accurate information to the press. Sure, all administrations want to get their side of any story to the press, but when it comes to Trump World, the White House Press Secretary's office can't even give an accurate summary of how the president spent his day.

Here's the subject of Geidner's ire: a release called a "Readout of the President's Day," in this case, for Saturday, March 18. Geidner cautiously says the release of these little pseudo-summaries of Donald Trump's schedule "feels like a not-good development." In part, it's the very use of the term "readout," a term of art which in the past has always referred to a very specific thing:

You get "readout" news about things that are truly the sorts of things where no press is present -- calls with foreign leaders, for example.

For a president's entire day, it doesn't make a hell of a lot of sense -- as Geidner illustrates with a quick search of the phrase on the White House website. Going back to 2011, the term "readout" only applied to non-public events: phone calls, video conferences, and meetings President Obama held with various people and groups. The only "readouts" of a president's whole day -- when press was around -- have been sent out by the Trump White House. Worse, says Geidner, the document isn't even remotely an accurate account of how the president really spent his day instead, he says, it's "such absurd propaganda" that he would rather not post it, but ultimately, he can't really explain what's wrong with the thing without posting it and then peeling it apart. So what did the White House say Donald Trump's Saturday was like?

So that sounds like a really busy day! In the early morning and the afternoon, he fixed the V.A. (having canceled a "major meeting" on the subject he had plucked right from his bottom the day before) talked to the president of Brazil, and met with his National Security Adviser to talk about North Korea. That was one full early morning and afternoon! Except, as Geidner notes, you get a completely different impression of Trump's "work" day if you actually look at reports from the print reporter on press pool duty that day, Ben Kamisar of The Hill, who was not actually following the president much of the day, but stranded at the West Palm Beach Library.

For starters, at 9:40 a.m., the pool report has Trump leaving Mar-a-lago for another of his own properties, Trump International Golf Course. The pool was told Trump would be "having meetings and phone calls" at the golf course before returning to Mar-a-Lago. He went back to the resort at 2:44.

At 2:18, Trump's good pal Christopher Ruddy, the CEO of Newsmax, posted a photo of Trump hard at work in a MAGA hat and wearing a golf glove:

After Kamisar was picked up and returned to Mar-a-Lago, he added that he hadn't actually seen Trump himself but did get an update on the president's busy day at the golf course:

Have been told that the president took meetings and phone calls at the club and may have stepped out to hit a few balls. But was not given a confirmation as to whether he played any golf.

So he probably got a whole lot done that early morning and afternoon, just like the readout says. Except for a teensy detail, as Geidner notes: That phone call with the Brazilian president was scheduled for 4 p.m., which rather doesn't quite present the president as the hard-charger the text of the "readout" seems to indicate:

Yes, yes, "early morning and afternoon" technically covers the whole period, but gives the impression of Trump hard at work from the early morning, when the "readout" says nothing about the trip to the golf course at all, or what he did there, if anything. (Asked about it at today's press briefing, Sean Spicer said Trump sometimes has meetings at the golf course, all right). That would be the same Donald Trump who constantly slagged Barack Obama for wasting all his time golfing.

And then there's the summary of the evening, which has one sentence stating what Trump did, and one sentence of pure fluff:

This evening President Trump had another meeting, including dinner, concerning the Department of Veterans Affairs and how to turn it around for the benefit of our great veterans. Great progress is being made and will be reported on in the future.

Not mentioned in the "readout": David Shulkin, the secretary of Veterans Affairs didn't travel to Florida with the president, so he missed out on all those meetings -- apparently at the golf course and at dinner -- about making great progress with his department. But we bet the people who did have dinner with Trump -- Melania, Treasury Secretary Wilbur Ross, and the CEO of Marvel Entertainment, Ike Perlmutter, and his wife (Mike Pence joined them for dessert) -- had some fantastic ideas for helping veterans. Possibly some involving giving them mutant superpowers. At some point, Shulkin will probably learn all about those plans, and he'll be really glad to hear them.

One detail missing from both the pool reports and the readout: Did the president make par during his meetings?

Yr Wonkette is ad-free, and depends on donations from smart, skeptical readers like you. We'll never lie about our schedules, mostly because they involve so much day-drinking and naps. Hit the "Donate" clicky below to help us out!